Your Room or Mine? 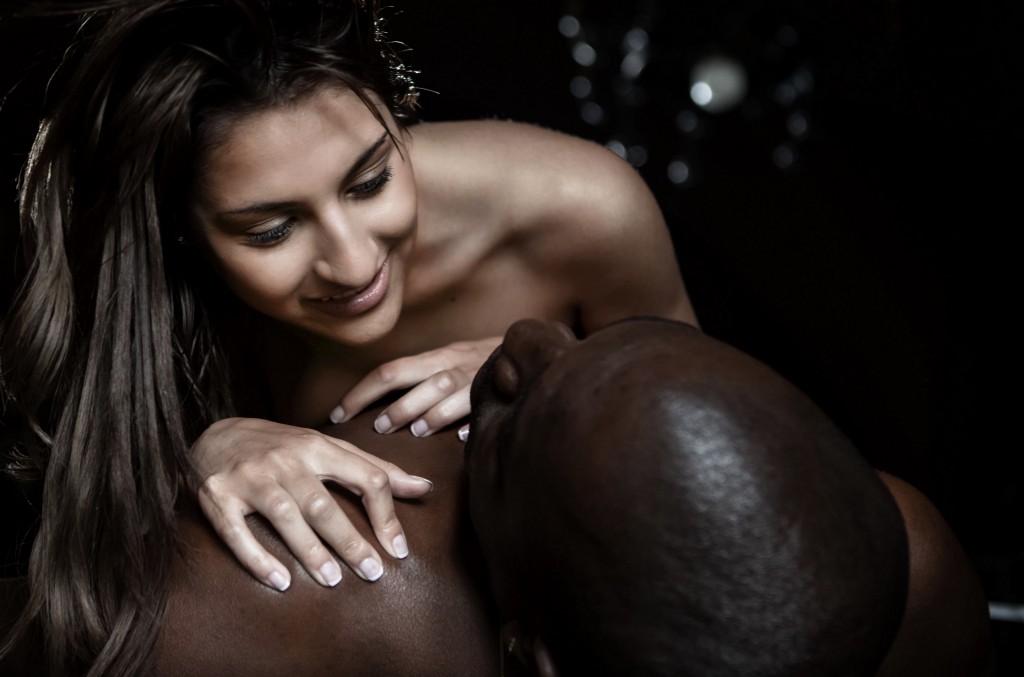 Curtis and Marie got on well although they were kind of cagey with each other — at least Marie was. No one could blame her for that. She’d been a widow some months now, and here was this handsome black fellow renting one of her rooms, practically a stranger to her.

Neither of them could have been prepared for what happened between them. It was as if all the avoidance and space they’d been trying to give each other was going to come to a dramatic clash.

It was a morning just like any other; the sky had opened with a heavy shower of rain. Marie was getting late for work and she had just taken a shower and was hurrying off towards her bedroom down the hall. Curtis was coming up the stairs, having just eaten breakfast; seeing how heavy the rain was falling, he was rushing back to his room to shut the window. He was at the top of the stairs, hardly paying attention, and gave a startled “Look out!” shout too late as Marie collided with him.

They fell to the floor with Marie landing on top of Curtis. Her towel came loose and as Curtis tried to help her up he realised she was naked with her breasts pressed against his chest. They muttered quick apologies to each other. Their eyes held each other as if charmed. It was then that it happened.

Their faces moved simultaneously and their lips met and enclosed in a kiss. The kiss felt spontaneous, almost tentative. Seconds later their lips parted and together their tongues met at the junction. Marie’s towel slid off her body. They rolled on their sides, their lips locked in a fierce kiss while their hands caressed each other’s body. Marie was gasping for air when Curtis finally broke it off. He got to his feet and helped Marie up.

“Well,” she said, then laughed nervously. “Where do we go: your room or mine?”

“Let’s make it mine,” he answered.

She felt relieved when he said that.

Curtis scooped her up in his arms and carried her towards his bedroom door. Her towel lay on the carpeted floor, forgotten for the time being.

He kicked his door open and laid her on the bed. He went to close to windows against the rain splattering inside, then turned around and began taking off his clothes. He threw them on the floor and Marie half sat up on the bed, her mouth falling open as she marvelled at his physique. She told him to come closer. Curtis climbed onto the bed and Marie put her hands on his chest.

“I have dreamed of this moment,” she murmured as she planted kisses on his torso.

She held onto him as if scared that he might suddenly start to fade away and she would realise that indeed this was all a dream. She pressed her body against his as her kisses climbed his shoulders and clavicle and up to his neck. Her breasts pressed against him. Her lips let out another gasp when her hand went downward and grasped his shaft. It felt thick; her fingers could barely go around it. She looked down at it and yes, it was true. His hands moved around her and grasped her ass cheeks and squeezed them together. Their lips met again in a kiss. Her arms wrapped around his neck and pulled him down to the bed.

Curtis pressed himself down on her, his lips glued to hers, and raised one of her legs up over his shoulder.

“I too have longed for this moment, night and day,” he said.

He squeezed her breasts in his hands and mouthed at each of them. He raked his teeth across the flesh of her tits and mashed his lips against her nipples, sending shockwaves traveling up Marie’s spine as she arched her body upwards towards him. She was consumed with desire. She rubbed her hands over his head; her feet slammed a percussion beat on the bed.

Curtis sucked on her tits over and over before finally releasing her and sliding downward till his breath was slapping against the fluffy hair on her mons. He held her leg up and kissed the underside of her thigh. He lolled his tongue against her milky white skin, loving the aromatic smell of her pussy that was mere inches from his face. Marie released mounting moans.

“My God, you’re so beautiful,” he murmured.

When he felt he’d made her wait long enough, he drove his face down to her yearning pussy. Marie cried sharply the moment his tongue contacted her labia. Her hips rose and fell involuntarily. Every part of her body was alive with sex; her moaning lips echoing her craving.

She writhed on the bed, caught in a rapture. Pleasure and desire, immeasurable, seared through her mind and heart.

Curtis pressed his palms flat on her stomach as he fought to maintain control over her. He spun her around and let her raise her ass upwards, pushed her thick ass cheeks wide and drilled his tongue down her asshole. Marie’s entire body shook from this and she muttered a high, lengthy cry as with her eyes shut she observed a super-nova star explode . . . explode deep within her.

She fell on the bed, panting like one who’d just ran a marathon. It was unbelievable to her that she’d just achieved climax, and it wasn’t her making. She was enjoying the exquisite feel of it when a dark shadow loomed over her face. Her lover’s lips kissed hers; his tongue slipped in to mingle with hers.

“I’m not done with you yet,” Curtis said to her.

Thank you for enjoying this excerpt from my book “In May Comes Summer”. You can find it on my Wattpad page.

I don’t know yet if this will be my final story before the decade ends. You’ll just have to stay tuned for more. But if by chance it is, then I hope you’ll continue sticking with me into 2020.

I look forward to seeing you then. Peace.❤️