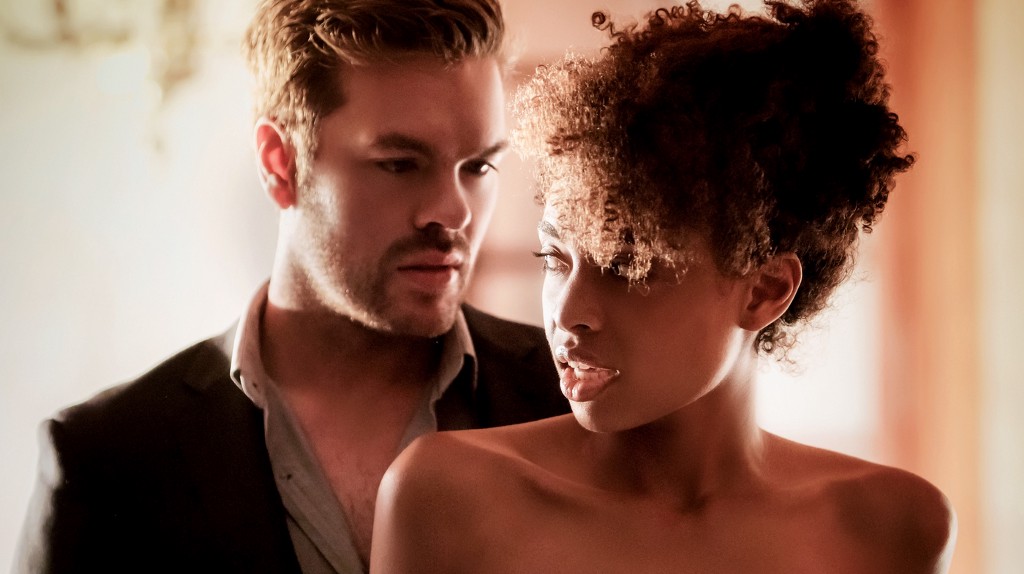 I hate riding on this metro, Justine thought as the sliding doors opened to the underground train.

The evening metro ride was the worst. While everyone was heading home from work, she was going to work. It fucking sucks!

Out of nowhere she sensed something to her left. Automatically glancing over, she locked eyes with an older man in a grey suit. She took in his grey beard and dark hair as they quietly observed each other. His handsome face held a kind, regal presence as if he were a humble king slumming it among the common folk.

After a moment, his brown eyes sparked with the same magnetism of his sexy smile. Justine’s cheeks hurt from the huge smile she tried to bite back into a friendly grin. She was surprised how attracted she was to this man twice her age. Embarrassed by her schoolgirl crush, she quickly looked away.

He must have been super-hot when he was younger, she thought as more people crammed into their section of the train.

As they neared a stop, Justine braced herself for the smushed sandwich that she was about to make with 60 other passengers for the next four stops. During this time of day, enjoying personal space or decent body odor was never an option.

Justine’s arm hurt from the hundredth time the man with a briefcase knocked into her elbow. She was too packed in to turn around and glare down at him. Instead, she settled with biting down on her tongue as the worst string of insults came to mind.

She knew that after a few more stops the crowd would thin out. She kept reminding herself that it would only be a couple more stops until she could sit down without being touched. She didn’t like random hands brushing her arm or backs bumping into her side, even if it was all by accident.

By the next stop, each passenger was packed inside the car like sardines. Justine had to struggle to move her arm. She couldn’t even turn to apologize to the person slightly behind her when her elbow knocked into his stomach.

Soon, she began to be conscious of her own sweat forming from the collective body heat inside the car. The idea of being smelly around strangers was making her hotter and more nervous. A fact that made her sweat more. Please, can everyone just back the fuck up!

As a tear of sweat slowly made its way down the curve of her forehead, the ridge of her button nose itched in anticipation of the salty drop heading its way. Justine roughly forced her hand past the shoulders that hung between her arm and wiped her face. By that point, she was too irritated to ask for forgiveness.

When the doors opened again, she ground her teeth as more people slipped through. It forced her plump ass to crash against an unknown crotch. Embarrassed, she meekly stepped as far away from the stranger’s pelvis as space would allow, which was about a centimeter of room.

Within seconds, the crotch was next to her ass again. This time a short tube the shape of a handlebar rested between her ass cheeks. Ashamed at the instant pleasure she felt from the intimate touch, Justine tried to move forward, but was unable to get pass the wall of unmovable bodies keeping her in place.

The handlebar had almost doubled in width when it tapped her ass again. The thick rod slid up and down as it moved into her ample backside. Justine had no idea what the stranger looked like nor what to do in that crowded public area.

She couldn’t turn around to say anything. She tried to shift to her left and was greeted with the same rock-hard cock. Then she would shift to the right, stepping on toes in her hurry to get away from her excited assailant. Still it made no difference. His well-portioned penis stayed on her as if it was on a mission to pleasurable release.

Secretly, a part of Justine enjoyed the feeling behind her. The area between her thighs grew moist not knowing who he was or what he looked like.

She imagined the older gentlemen she saw earlier. Knowing he would be too polite to do such a thing made it as naughty to imagine it as it was to be dry humped in front of unsuspecting passengers. The crowd was oblivious to the sexual excitement building between her solid thighs.

The bold man’s slow strokes caused her to feel all of him. She imagined the same stout penis filling her deep. A light trickle of cream fell into her panties. The titillating sensation of his full hardness made her throw caution to the wind. Soon, her hips were making tiny circles as she backed into his thickness.

Underneath her black button up top, warmth spread to her brown, perky nipples as they pressed against her lace bra. Justine bit her lower lip. Her fingers yearned to slip down to rub her clit. But she couldn’t do that. She couldn’t pleasure herself in front of all these people who clung near her turned on body. No matter how much she wanted it.

Instead, she slightly lifted onto her tippy toes, allowing part of his wide mushroom top to dip in between her legs. She swallowed a moan as he slowly rubbed it across her pussy. The heat of his cock travelled through the thin fabric of her khaki slacks.

No longer able to resist touching herself, Justine bumped people around her as she crossed her arms over her chest. Her hands cuffed her breasts from underneath, discreetly squeezing her chestnut colored titties as her lower belly churned in fiery desire.

When the train pulled into the next station, Justine was knocked off balance. She fell into the chubby woman in front of her, giving the stranger an opportunity to ram into her from behind. His thick head penetrated a couple centimeters into her wet vagina hole for a few seconds. Excited sensations ran through her body.

Unfortunately, the fabric of her pants and the woman she was trying to back away from had stopped Justine from backing onto his penis. In fact, her fumbling to rebalance herself had briefly broken their sexual clasp.

“Oh, … I’m… soo sorry,” Justine tried to concentrate on her speech as she moved upright and off the poor older lady.

Then, passengers rushed out the closing train doors. As the train preceded down its line, a few things had occurred to Justine: One, their section of the train had way less people on it. Seats were almost empty of bodies. And two, her phantom cock had disappeared.

She quickly looked around. Who got me so wet? At that point she could care less about his looks, she just wanted to ride on his fat dick.

Apart from a few couples and people reading, the only other passenger was the old woman she had bumped into at the last stop. The silver fox was nowhere in sight.

Sadly, she looked out the window of passing concrete walls and realized her good dick had gotten off the train at the last stop. Justine slumped into a nearby seat and imagine what she would have done if he was still there.

The next day Justine found herself eager to get onto the underground. She rushed into the same small car as the previous day and searched around the train for her would-be dry humper. As she stood by the small corridor that led to the adjoining car, she noticed that all the faces were new except for the same handsome older man from the other day.

He nodded a smile in her direction. Glee in his eyes. Could it have been him?

She eyed his blue suit. His tie was gone and the first couple of buttons on his white dress shirt were undone, allowing a glimpse of a few strands of dark hair through the opening to his tan chest. And oddly, the brown trench coat he was wearing was a bit out of place for this warm spring day.

Pricks of arousal zapped up her belly to her neck as they arrived at the next stop. Tons of people crowded into the metro, pushing her against the corner in the corridor. And to her happy surprise, it landed her right in front of the silver fox of her desires.

He smiled seductively down at her. Justine’s hazel eyes matched the thirst of sex in his brown ones. He leaned into her. Then, his large hand cuffed her right breast as his other hand gently turned her around.

He squeezed and rubbed at her nipple as she placed a hand on the train wall to steady herself. Her round ass cheeks stuck out to receive his thick cock. The stranger slid it up and down as he had before. The promising movement slightly lifted her short black skirt up, exposing the bottom half of her royal purple G-string.

Like before, Justine moved her hips into tiny circles as the man slowly stroked against her ass to keep their naughty foreplay discreet. The crowd gathering behind them had no idea of the ride he was giving her.

Justine moved further towards the corner, arching her ass deeper against his hard, thick cock. Soon, he slipped down and shot between the rim of her moist pussy. Justine grew frustrated at the material of her G-string and his trousers that stopped him from entering his full girth inside. Her vagina desperately gripped around his penis, begging him to come inside.

Suddenly, the train stopped. People shifted in. Justine was excited to be able to be shoved closer to him. But instead, she felt a light air from the absence of his warm dick. In the corner of her eye, she saw a flash of gold. Then, the man coughed loudly which barely masked the sound of a zipper being pulled down.

With one finger he hooked her G-string to the side as his other hand guided his thick cock inside her. Her wet pussy walls expanded as his big cock moved up towards her spot. Justine rolled her hips and backed into him.

His trench coat hung open, allowing a small cover from Justine’s movements. She could control the tempo of their fucking without wandering eyes. And she took advantage of it. Justine’s skin tingled with heat when one of his hands gripped her hip, holding on to her wild jerks.

She shoved her fingers into her mouth so she could bite onto them, silencing the pleasurable moans which curled inside her throat as she drove herself faster onto his bulky shaft.

Justine’s excitement heightened with each stroke. The awareness of the people behind them doubled her excitement. Her heart was pounding hard. An inferno of desire burned in her lower stomach. And then, her soaking pussy began to tighten up until it repeatedly grasped firmly on his throbbing dick.

As she was floating down from her orgasm, she felt a gentle hand shift her short black skirt down. He gave her ass a soft pat before a breeze of cool air replaced where he had been standing.

Justine turned in time to see him walk with the exiting crowd. When he reached the platform, he pivoted around and flashed her a sly grin.

This shitty evening commute just got better, she thought as she smiled back through the glass of the closing train doors.