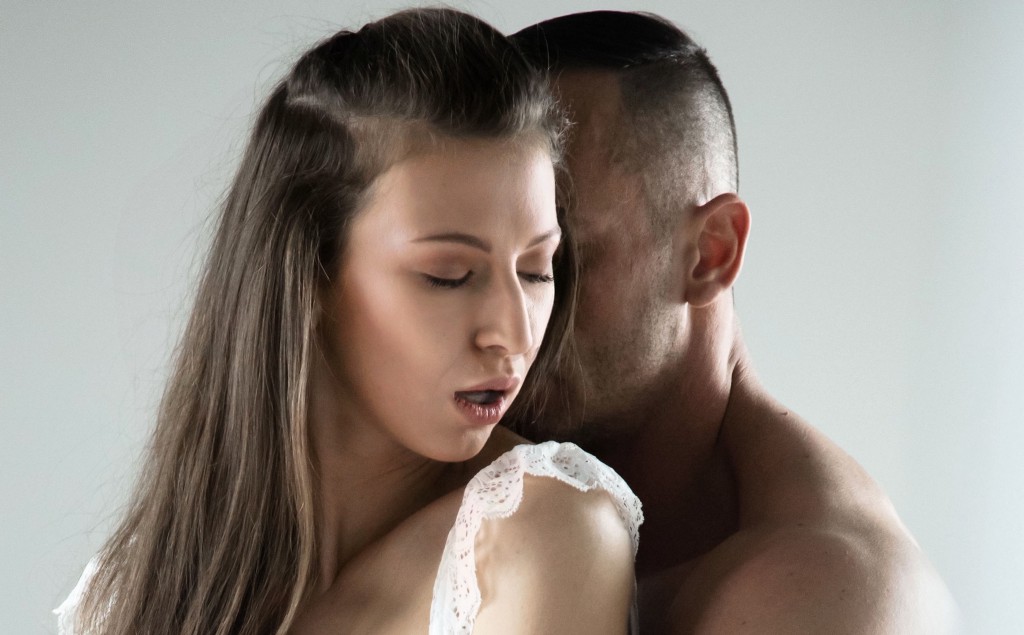 All Trish knew was that she was supposed to meet Brett at the airport. He’d been flying for years and it wasn’t the first time they’d gone up in a plane, but the sound of the excitement in his voice was practically sexual. Given that they’d only been married a few weeks and had been all over each other two or three times a day nearly every day meant she knew just what that sounded like. But he wasn’t just hard for her.

“Come right after work. Don’t even change. I’ve got something that’s going to blow your fucking mind.”

So, she did. The long white lab coat she had to wear thanks to her job nearly covered the short skirt she was wearing. The business casual purple silk blouse underneath showed a generous amount of cleavage. She couldn’t help her ample curves and didn’t want to now. Brett had convinced her after two years of chasing her that she was beautiful and now she mostly believed him.

She saw him waving from a nearby hangar, something dangling from his hand. She ran over to him, thankful she was wearing flats. “What in the hell, Brett?”

“Put this on.” He held out the blindfold. It wasn’t the first time it had come into play. But it would be the first time in public. She was already damp between her thick thighs.

“Alright.” She did as she was told and after some steering and climbing, she knew she was in a cockpit of some sort.

“Sit right there and take off the blindfold.” He sounded giddy, which considering he was over six feet tall and as thickly built as she was, was hilarious.

She removed it and her mouth fell open. “What the hell?” In front of her were the controls for some kind of jet fighter. The cabin was spacious and the whole thing looked straight out of Mission Impossible.

“It’s an Su-34. A Russian fighter-bomber.” He started playing with controls after he put on the headset.

She followed suit so she could hear what he was saying more clearly. “How did you get your hands on this?”

“My last client, the tech billionaire? He was so happy with what I did for him, he bought this for me. I’d talked about it a lot apparently while we were chatting. That and the check he cut for me means I can spend some time really getting used to flying real planes.”

Soon, they were racing down the runway. And the plane wasn’t the only thing racing. Her heart sped up and her hand crawled between her legs. The thrust and the power were exhilarating. She was no longer damp, she was downright slick. She moaned under her own touch.

“Getting started without me?” Brett’s voice came over her headset. “That’s okay, I like it.”

She bit her lip, knowing he did. She unbuttoned her blouse and filled one hand while she continued sliding her finger in and out of her wet folds. “Can we fuck while you fly this?” She wanted him inside her now.

“Once I get to cruising altitude, I’ll set the autopilot.” His voice was breathy with excitement. It didn’t even bother her that she couldn’t tell what excited him more.

She unbuckled and stood up; there was more than enough room to walk around. But all she had in mind was finding out where she could fuck her man. The floor was carpeted and the aisle wide enough. She took off her lab coat and top, leaving her only in her bra and skirt.

There were a few dings behind her. “Get on your knees, baby.”

She did as he asked, flipping her skirt up over her ass. She smacked it a little. “Come on board, handsome.”

He had already unzipped and knelt between her legs, first running his tongue from near her clit all the way up to where her ass started. “You taste amazing, baby.” He slid two fingers into her. “And you’re so wet.” He pumped the fingers in and out a few times.

She shivered and cried out. What she really wanted was his dick, but he knew what he was doing. There was a crinkling and the vaguely wet sound of him rolling on the condom. They didn’t want babies just yet. Then his head pressed against her and he slowly, torturously, ran his length into her.

He was the perfect size. They fit together in every way. She pushed back against him and soon the sound of flesh slapping flesh filled the cabin. His grunts and her whimpers competed against the distant sound of radio chatter, the roar of the engines, and the other cabin noise.

“We’re part of the two mile high club, sweetheart.” He thrust into her every few words.

She giggled, his enthusiasm infectious. “And I bet the number of people who’ve done this in this plane is ooohhhhhh….” She felt him brush her clit with his fingers, obliterating whatever she was trying to say. She lowered her face to the carpet and begin rocking in earnest.

He slammed into her harder, faster. “Oh fuck, you’re so beautiful.”

It didn’t take much to push her over the edge. She began to grip him with her walls and she shivered as she came. Her legs were weak and she felt her left foot twitch. “Come in me. Come in me now.”

“Almost…” He grunted and she could feel the jerking of his cock as he filled the condom.

She reached back and grabbed his hip, holding him as deep in her as she could. They stayed still for a few moments even as the plane carried them at nearly a thousand miles an hour. She wanted this adventure with this man to last forever.

Eventually, they were both able to stand shakily. Once they got cleaned off in the galley and had their clothes back on, he took his seat and she took hers.

“We’ll be landing in about thirty minutes. I thought a nice dinner and then maybe a repeat of that on our way back?” He grinned over at her.

“What, no in-flight meal?” Then she got out of her seat and knelt beside him. “Maybe just a snack.” She unzipped and pulled out his still sticky length.

Moaning as she tasted him, she sucked and worked him as he took them faster into the evening and further into their adventures together.