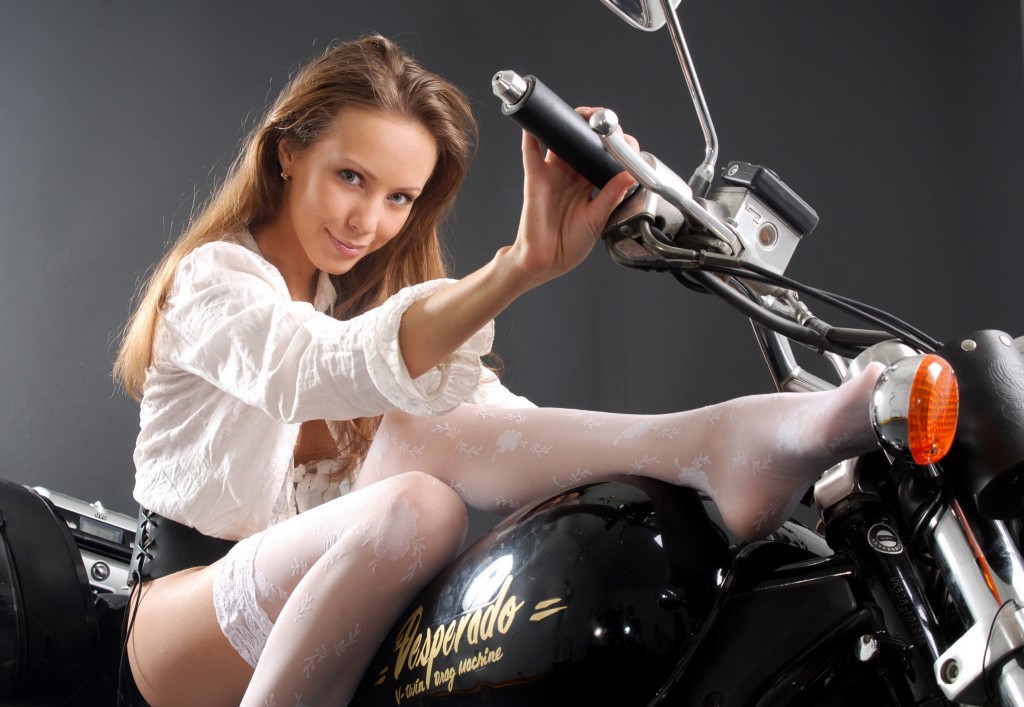 Her delicious body was payment in full…

It was much brighter than I expected. But then again, I had only seen bars like this in the movies. Dingy and dirty, with an air of sweat and smoke. Leather-geared burly men sitting in booths that had seen better days.

This biker bar was surprisingly decent. Not the cleanest establishment, but passable and an excellent variety of ales on tap. And unlike in the movies, when I walked in, the music did not stop. No-one turned to look at me. I nearly shook my head, embarrassed at my naivety and nervousness.

I strolled towards the bartender, taking in her tall frame, short black hair, and breasts that were nearly popping out of her top. There was no need for the top at this point.

“I’ll have a pint of the Oskar Blues.”

“Sure thing,” she said. I glanced at her name tag as she turned to get my pint glass. Claire.

“Here you go,” Claire said, resting the pint on a coaster in front of me. She smiled, “This your first time here?”

“Yeah. I wanted a change from my usual place.” I took a sip and turned to take in my surroundings as she served another patron. They all looked, so… regular. I supposed I would fit in.

The raucous laughter grabbed my attention. Towards the back of the bar, the door swung open and out walked four guys. The one in front had the command of a leader. Now he looked every bit a biker — tall, muscular, tattoos wrapped around his biceps.

While he looked smug, the guy bringing up the rear looked pissed. “Poker game,” Claire replied to my questioning face.

“Looks like the pissed off guy lost.” I watched as the big guy approached the bar. He sat and ordered a beer.

“Haven’t seen you before,” he said unexpectedly.

“Chris,” he replied, returning the handshake.

“Nope, had one for years. I just have more free time. To ride, check out bars, play some poker.” That caught his interest.

“You any good?” Chris asked.

“We’ll see. We got a regular game on Tuesdays — bring cash, we’ll be happy to take your money.”

Next Tuesday arrived, and I was there, cash in hand. I grabbed my pint and entered the back room. Five other guys sat around the table, and I took the last empty seat. The first couple of rounds, I was decent, won a couple hundred.

Then the drinks came pouring in, a few shots, vodka mixers, five more pints. Next thing I knew, I was down $5,000.

Shit. “Time to pay up,” Chris said to the group as the game came to a close. I stared at the table as if that would fix my problem.

“Where’s your money?” He was looking directly at me.

“Don’t have that much, I’ll get you next week.”

He frowned. “Not good enough.” It was then I noticed just how big he was. 6’2” and intimidating. The room was quiet. The other guys looked on in silence. “You need to pay up tonight.” He stopped, paused. “But we have a barter system in place,” he said smugly. The others chuckled.

“What’s that?” I asked uncertainly.

“Call her, tell her to meet you here.” He looked at the other guys in the room. “Get the rest of the guys, tell them we’re running a train tonight.” He turned back to me. “Call her!” he barked.

I got my phone out and dialed Ashley’s number.

“Ashley, I need you to come to the King’s bar. I’m in a bit of shit. Hurry, please.” I hung up before she could protest. Twenty-seven minutes later, Ashley showed up. Claire pointed her to the back room, and in she walked.

“Your boyfriend is in the hole for $5,000,” Chris said before Ashley could ask what was going on. “And you are going to pay his debt.”

She looked at me. “You dumb fuck, how did you end up in this situation?” A mixture of anger and amusement rang out in her voice.

She started to unbutton her shirt. “How many guys?” she asked, as if it was no big deal.

“We got some in the bar; more will probably come soon,” Chris answered.

I’d never been so happy to have a slut for a girlfriend. She would fuck any guy for free, and at least this time, she was earning something!

The closed sign was placed on the entrance door. The back door was open for all the latecomers. Claire was behind the counter pouring drinks and watching the action.

I was made to watch as my girlfriend paid off my debt, sitting in humiliation as she got off on guy after guy.

As he was the leader, Chris went first. Ashley was bent over one of the tables, completely naked. He walked over and kicked her legs apart wider. Undid his buckle, slid it out loop by loop. I thought he was going to use it to spank her perky ass, but he looped it around her neck. His dick was hard, probably about seven inches. He guided the tip to the entrance of her slit. Got a firm grip on each end of the belt and pumped into her.

“Fuck!” she yelled out. Chris had no mercy on her, knocking her into the table with each hard thrust. She loved being choked, and it showed. Chris’s cock glistened every time he pulled back. He grabbed onto the belt with one hand and used his free hand to grasp her ass. Holding a perky round cheek in his strong hand, he dug his nails in before he slapped it. I saw her mouth open as she moaned. He was turning her on — more than I ever had.

Their bodies were in sync. For every stroke Chris gave her, she took it willingly. She was moving her body in time with his. Leaning back into him every time his balls slapped her cunt. She started gasping as the belt got tighter around her neck. He was in ecstasy, the veins on his biceps becoming more pronounced.

I was too turned on to say anything. I started stroking my dick as I watched my girlfriend get light headed. I wasn’t worried, as I could see she was loving every minute of it.

Two guys rushed to her side, holding her up while Chris continued to fuck her. The sound of his heavy breathing echoed in the silent bar. All eyes were fixated on him. I glanced around; I wasn’t the only one turned on. A few guys had their cocks out, eagerly awaiting their turn.

His loud grunt snapped me back to the action. He had abandoned the belt and now had both hands gripping her shoulders. He was using them as support as he started to fuck the shit out of her. I kept rhythm with my strokes. The two guys on either side had their work cut out, holding her in place for him.

The two guys hoisted her on the table. “I’m next,” said a guy from the back. He walked over, and I swear his cock entered two minutes before him.

One steady deep thrust. Inch by inch, his black meat was being swallowed by her pussy. He grabbed onto her legs tighter with every inch he entered. He was leaning over her. She started to moan as he got the last two inches in. She was taking all of that black dick in one go. She looked shocked at first as she got her bearings, then a smile crept over her face.

I guess she heard; she looked at the guy fucking her and gave me the finger as he started to pull out. Nearly all the way, but stopping right at the end. He placed his hands on her waist. Pulled her towards him and slammed into her — all 11 inches taken at one time.

I’d never heard someone swear more in my life! Yet she wrapped her legs around him, pushing him in deeper. Not letting go. He was locked in, filling her to the brim, moving slowly. He was giving her a chance to get used to his cock. He started to play with her nipples. They stood erect as he began to bite them, taking his time with each nipple. She moaned her delight at this.

We were all so mesmerized by the sight that we didn’t notice the other guy until he was right next to her head. Average built, but very good looking. He already had his cock out. He got on top of the table, kneeling over Ashley. Ever so slowly lowering his dick into her waiting mouth. Her small mouth was stretching as wide as it could go. His balls were resting on her face.

She soon found her rhythm as he faced fucked her, holding onto his hips to keep her balance. I watched as her tongue worked its magic. Licking, caressing, humming on his cock. The guys worked in tandem. Every time the black guy drilled into her, the other guy forced his cock deeper down her throat.

The guy kneeling over her suddenly pulled out, holding onto the wall as he aggressively started stroking his cock over her face. Soon letting out a deep sigh as he sprayed his load over her face and neck.

She felt a hand round her throat and his cock throbbing inside of her. She felt him growing bigger inside of her. He was about to blow. His face was scrunched up in concentration. His grip around her throat was getting tighter. He pulled his dick out as he was coming. Thick and white, he aimed it at her pussy. He was covering her cunt with his seed, watching it drip down to her ass.

I had a good view of her gaping snatch. I was impressed she took it all. But slightly pissed that she was loving it so much. But I only had myself to blame for losing $5,000.

We were there for another three or so hours. Guy after guy had their way with her. No breaks. Her mouth, ass, and pussy were used multiple times throughout the night. More members had come in through the back door. The bar was rammed with bikers of all ages and sizes. She was on all fours at one point, crawling over to different guys as they whistled to her. They were slapping her face before pulling it down onto their exposed cock. Some came in her mouth, others on her pretty face. The rest took turns coating her tits and ass.

Chris came over to me as she was taking the last guy. “Your debts have been satisfied,” he said. Not once breaking his gaze from her. “You have such a nice girlfriend,” he continued. “You’re welcome to bring her back anytime.”

“I’m sure she’ll love to take you up on your offer,” I replied. Thinking of other people I owe money to, and wondering if this was a way to settle those debts too.

Thanks for reading! You may enjoy the following:

Chelsea Rose Follow
« The Quarantine vs. Your Affair
Quarantined with Gabby »