The Boss Gets What She Wants 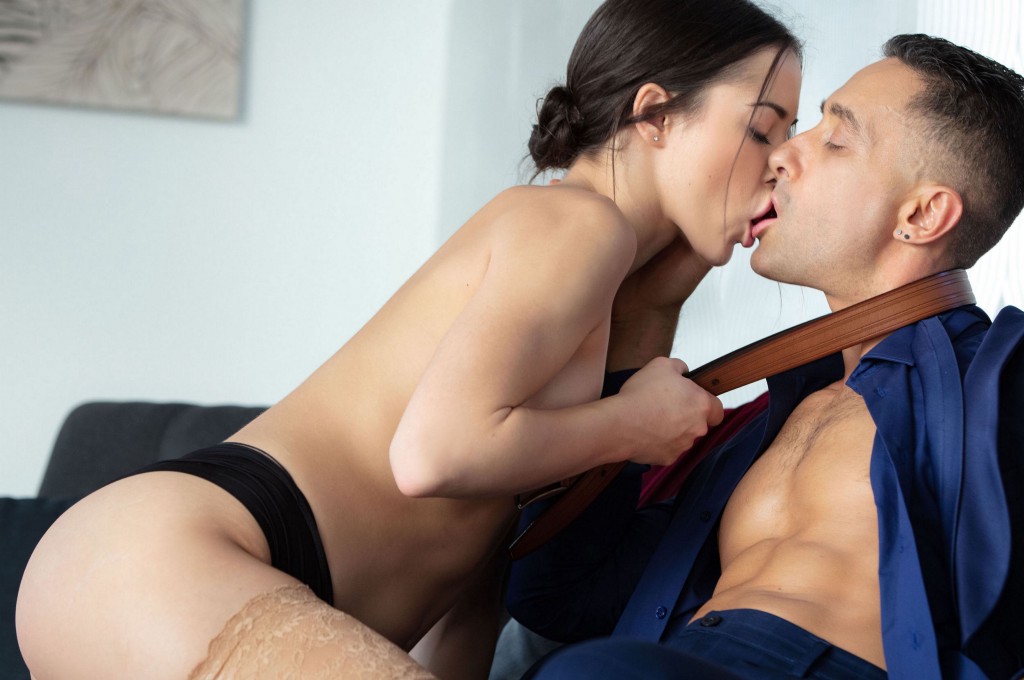 It was 10 P.M., and my lead analyst was working on the proposal for my imminent acquisition. I started in this business 20 years ago as a young analyst. It was nice to have an analyst working for me, now.

I hired Tony one year ago. He was a young and eager Finance major. Most importantly, he was fucking hot. He was a solid piece of muscle.

I knew we would be working late tonight, and so I wore a tight skirt and kept my blouse unbuttoned. I wore hot pink lipstick and made sure that my makeup was on point. I had my eye on him, and with the two of us alone in the office, I was going to make my move.

“What are your plans for the company, Ms. Russo?”

“They have $1.2 billion in cash and equivalents and no debt and a piece of shit business that is bleeding capital. When the shareholders vote to give me the board seats, I’m going to fire everyone, and I’m going to liquidate the cash for myself. The market cap is $700 million, and I’ll make a clean 71% over what I paid for the stock.”

My analyst looked horrified. “But . . . those people. You’re going to fire all of those people?”

I scoffed. “You’d better believe it. That’s how the world works.”

He looked increasingly uncomfortable. I smiled and looked his fit body up and down.

“I guess you’ve never encountered a woman like me. A woman who figures out what she wants and goes after it.”

He tried to laugh. “I guess not. Most of the women I’ve known in my life are more interested in being popular than just ruthlessly pursuing their goals.”

I stood up out of my seat and moved closer to him.

“You’re used to docile women, aren’t you? Women who just go with the flow.”

I got closer to him to make him uncomfortable. I knew that Tony was a big man on campus. He was probably used to having women as putty in his hand. Now he was putty in mine.

I touched his shoulders. They were thick, muscular, and athletic.

“I don’t take orders. I give them, and I fucking get what I want.”

I reached down and felt his thickening cock in his pants. I heard his breathing intensify.

“You want a woman who goes after what she wants, don’t you?”

“Yes, yes, I do,” he conceded as I gently stroked his cock through the thin layer of fabric that covered it. I breathed on his neck and watched him tense up. He felt like putty in my hands, and I loved every moment of it.

I took his hand and guided it between my legs. I inserted his finger into my slick pussy. I then leaned in and kissed his quivering lips.

“I get what I want,” I told him emphatically while looking into his eyes. “Do you want my pussy?”

“I thought you might,” I told him as I licked his ear and let him sink his fingers into my moist pussy.

He began massaging my clit while I kissed him. His body shook in anticipation of fucking me. My cunt dripped onto his fingers. I took him by the wrist and removed his hand. I pushed it up to his face.

He nervously inserted the fingers into his mouth.

“How does my pussy taste?” I asked him.

“Do you want to taste more of it?” I asked him.

I grabbed him by the tie and led him to my desk. I sat down on the desk and leaned back. I spread my legs and hiked up my tight skirt, unveiling my cunt. I wore no underwear and signaled to him with my finger to come closer.

He leaned in and began licking my pussy. “Nice, Tony, that’s what I fucking want. Lick my clit and put your fingers into my cunt.”

He obliged and began gently flicking his tongue upon my clit, as my juices dripped down on his face. He inserted two fingers into my pussy and finger fucked me while he licked me. I let out a sultry moan, and I released my breasts from my blouse and began feeling my nipples, massaging them, and stimulating myself. I bit my lip.

“You’re doing such good work, Tony,” I told him. “I want to see your cock.” I propped myself up on my desk and looked at him. “Drop your pants,” I said.

He dropped his pants and revealed a fat, eager cock.

“Stroke it for me,” I told him. He started stroking it fast and vigorously as he looked upon my voluptuous body.

He began slowly jerking himself, obviously hungry to go faster, but I forbade it. I made eye contact with him and started rubbing my clit.

“Do you like the way my pussy tastes?” I asked him.

I got off the desk and pointed at it. “Lie down and let me take your cock,” I told Tony.

He laid down on the desk with his hard cock standing at attention. I spread my legs and got on top of him, descending my juicy pussy around his fat, throbbing cock.

As I eased onto him, he opened his mouth and groaned. I ripped open his dress shirt and let the buttons explode throughout the room. I dug my fingers into his hard, heaving, muscular chest. I began gently bobbing up and down, letting his eyes feast upon my big, bouncing tits.

“Yes, yes, I like the way you fuck me, Sofia,” he said as my pussy gripped his hard shaft.

I smirked. “Don’t call me by my first name. I’m your boss — you call me Ms. Russo,” I commanded him.

He bit his lip as I bounced on his cock, and my cunt juices dripped down onto his hard body.

“What are you going to call me?” I asked him and ceased grinding against him.

“Ms. Russo!” he said emphatically, desperate for me to begin grinding on his fat cock again.

I lifted myself off of him and bent over a chair at my conference table. He gripped my ass and plunged into me. His sweat dripped down onto me, and the slapping of our salty bodies filled the room with our lusty pleasure. I gripped the conference table as my analyst pounded me, his fingers digging into my thick ass.

“You’d better fuck me harder if you want a good bonus,” I told him through gritted teeth. The pace of his fucking intensified as his body slapped into mine and made my ass shake with each heaving thrust.

“Yes, fuck, yes, fuck me harder!” I cried out as he pounded me hard.

After some vigorous fucking, I told him, “I want to look at you while you fuck me.”

He removed himself from me. I leaned in and kissed him, pressing my body against his. I felt his hard muscular chest and kissed him deeply.

“Look me in the eyes while you fuck me,” I told him as I lay down on the conference table and spread my legs for him.

He grabbed my legs and inserted himself into me, and looked down upon my tits.

I could tell it made him uncomfortable.

He spread my legs and stretched out my cunt as he began fucking me, with the splashy sounds of our fuck session filling the entire empty office.

He looked me in the eyes. “That’s it, fuck me, Tony!” He looked into my eyes with complete lust. We became lost in each other. I felt his cock begin to throb as he erupted within me.

“I’m glad I hired you,” I whispered in his ear, as he attempted to calm his breathing.