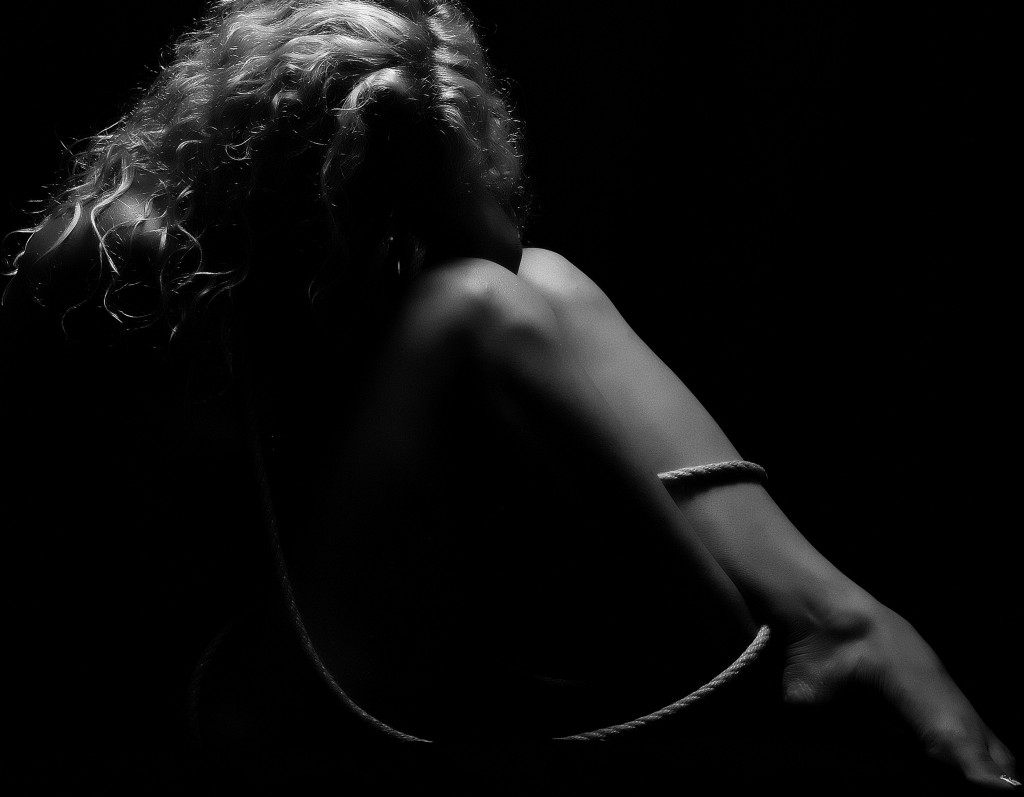 Jason had murmured briefly into his phone, which had made me jump: a demonstration of one of our “new toys.”

He controlled almost everything in his life — it sometimes seemed — from his smartphone.

We were walking along his private beach; I was wearing a bikini under a loose and gauzy summer dress, the bathing suit bottoms holding in two insertions that he had “gifted” me with, both of them Bluetooth-controlled: six sensory options each, yielding some number of potential combinations that I couldn’t calculate.

“What would it be like,” he’d muse, stroking my mons gently, “if I were to take a short leather strap to you here?”

And then — for the ensuing two weeks — he’d said nothing more on the subject.

But, every time we were together, he would be sure to stroke me in exactly the same way, saying nothing, but making a thoughtful humming sound, often staring directly into my eyes as he did so, languidly blasé, a scientist awaiting the response of his research subject with intense but patient interest.

He’d close to driven me crazy before, finally, I took the only option that I possibly could, frantically whispering, hoarsely pleading, breathily begging, for him to “please, please — please! — punish my pussy.”

At which point, he had graciously . . . acquiesced, satisfied my desperate desire, my ravenous hunger, my burning need for that “correction.”

A need — of course! — that he had so carefully planted and then assiduously cultivated.

I wasn’t sure exactly what was to happen with the insertions, but he’d presented them to me in a black leather case, lined with crushed velvet, which suggested that they were meant to “travel.” And, while he didn’t share this particular detail, I was sure that the devices could be controlled over the web, as well as via Bluetooth; I’d shivered at the thought of Jason “turning me on and turning me off” from afar, the jitter and flutter the idea induced disturbingly strong, tantalizingly terrifying.

The sugar-fine sand warm between my toes, I took in, then released, a long, slow, deep breath of salt-tanged air, allowed myself to observe and fully feel the welter of emotions and physical sensations buzzing and swirling around and through me.

I simply let my happiness swamp any and every other possible thought, feeling, or consideration.

What’s Love Got to Do with It?

“And so, you will now, what exactly?” Devya said, clearly holding herself back — clearly a degree of restraint that was not to last.

I’d had a good heart-to-heart with Genevieve just the day before, the two of us in her bed: her back against the headboard; legs straight out, over the covers; her sleek, white, satin and lace négligée making only a halfhearted gesture in the direction of covering her beautiful breasts, the hem not quite reaching the midpoint of her — creamy-pale — thighs; me perched near the edge of the mattress, wearing one of Jason’s unlaundered, long-tailed, black, sleeveless, nylon exercise shirts, and nothing else, leaning in awkwardly, my head more on her collarbone than her shoulder, squinting up at her face — when my eyes weren’t closed — which was difficult to focus on given how close it was.

Things were moving fast between Jason and me — and speeding up, week by week: we were beginning to “name” things, to get . . . specific.

The word Genevieve had used?

Not quite — well, not at all, really — that Jason had fobbed the conversation off on Genevieve; there were — as there had to be, given the situation — conversations across every configuration that could be formed between and amongst the three of us.

What he was doing?

You’d have to call it good management — although that put a cold name to a hot topic.

What was on the table, first up, was Exclusivity.

Jason was ready to make that commitment to me.

Was I ready make that commitment to him?

My impulse had been to instantly say yes; this was something Jason would not allow.

“We all need a little time,” he’d said, smiling at me, both hands raised as if to stop traffic, preempting my response.

I wasn’t jealous of Genevieve; rather, I was impressed.

Her attachment to Jason — and his attachment to her — wasn’t threatening to me at all. The degree of loyalty they showed for one another boded well, I thought at the time, for the future, however the future might be configured.

“You are,” I felt apologetic being this blunt but, “Jason’s . . . servant,” I’d said, a little tentative, hoping to get just a bit more clarity or clarification.

She’d flashed me a small, quick smile — fully at ease, my wording having dented her calm not at all.

“I serve my lover,” she’d said, just a hint of correction in her tone, voice briefly hoarse with passion. “As my lover serves me,” she’d added, eyes seeming to flash for a moment — in a gently amused reaction, I assumed, to my insufficiently squelched look of surprise.

She’d raised her eyebrows at me, given me a longer, warmer, smile.

“No One-Way Streets,” she’d said, voice almost down to a whisper. “Playtime is playtime and,” she gave an exaggerated shiver, “playtime is beautiful! But real, ongoing, sustainable relationships? They can’t always and only be about following orders. Just doesn’t work. That,” she’d added, “would be abusive,” almost a perfect echo of what Teddy had said to me, scant weeks before!

I knew Jason had been married — if only briefly, to a woman more or less twenty years his junior; I knew a good deal — of course, having come to meet him in the context of her lawsuit — about his relationship with Caroline Heatherington; and — the most surprising part of the whole thing, to me anyway — I knew, I had come to understand, that, at core, Jason Flood was a lonely man.

“He will — ” Genevieve said, “sometimes I will — discipline and correct you; within established and agreed parameters, as you have already experienced, you will be gifted the appropriate measure of physical pain and emotional humiliation, of the control and the absolution you so desperately need. The larger . . . architecture of the relationship will be subject to ongoing negotiation. And — ” she reached out, stroked the backs of her fingers down one of my cheeks, then traced her thumb from one corner of my mouth to the other, as if zipping-my-lips, “ — should the two of you wish a more formal and permanent relationship,” my heart skipped a beat at the prospect — in surprise and delight, in desire and fear, in anticipation and confusion, “the implementation of that decision will hinge on my concurrence.”

Well that was a well-wrought piece of legalese: implementation hinging on concurrence!

I blinked, unsure how to respond, an odd thought, unbidden, flitting through my head.

Genevieve simply read my mind — not that this was likely that difficult a feat.

“Yes,” she said, preempting me softly, with the slightest hint of a mocking smile. “You will have to ask me for his hand in marriage.”

The man we had both accepted as our Master was also her Sensitive Little Boy, the delicacy of his feelings — perhaps as well, some suspect aspect of his judgement? — requiring the loving supervisory attention of a woman . . . in his employ?

Her hand gentle on the back of my head, Genevieve brought my face up to hers; eyes dewy but steadily focused on my own, she gently kissed, licked, and nipped at my lips; reaching between us, she ran her thumb down one breast, pincered and pinched the nipple, then did the same to the other breast, thumb and forefinger sliding a little further, to grasp one of the fine gold rings with which Jason had personally pierced my nipples, giving a quick tug and twist before letting go.

The brief, sharp, searing pain triggered an immediate swell and throb in my clit, and I heard myself half-gasp, half-moan.

“If I were to give my consent,” she whispered against my lips, “I would be ceding the greater measure of my authority to you.” I nodded at this tentatively. “I would have to be convinced,” she said, voice going a little melancholy, “that both of you would be safe in each other’s care.”

“Of course,” I had warbled in gratitude. “Of course.”

As to the other important woman in my life . . .

Devya took recourse to my full name with the same inflection — and in more or less the same situations — that my mother had used when I was a child.

Hard not to call it a reprimand — and increasingly difficult not to take it as condescending.

I wanted a sounding board.

I did not want to be lectured.

“Now, now, now!” Devya pressed on. “I am hearing no decision. Is that not right? You have decided something? You have not decided? I am now confused.”

I choked back a burble of laughter at that.