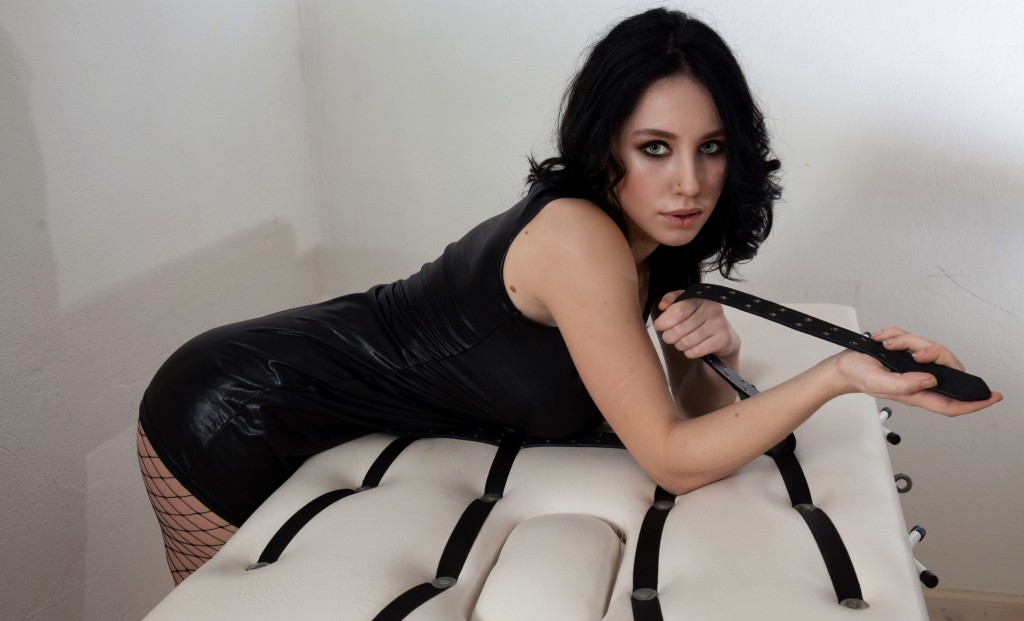 Where once there had been a single padded platform, like a mobile medical office exam table, now there were two, both tricked out with stirrups and restraining straps.

After our baptisms, Genevieve had herded us — both piss-wet and sheepish — to the outdoor shower, just off the house’s rear courtyard, and shooed us into the picket-fenced enclosure with a single bar of laundry soap and admonishment that we were to be allowed only cold water.

We washed each other, per instructions, carefully, thoroughly, and gently, using only our hands, then emerged to stand before her, side by side — my breasts and his ball sack contracted tightly in the cold, goosebumps pebbling our arms and our bellies, our outer thighs just barely touching each other — trying to suppress the trembling that was an amalgam of passion, of fear, and of cold.

Genevieve dried me off first, using a huge, warm, fluffy, white bath towel; the last patch of skin to which she paid attention: my recently denuded lower belly and inner thighs.

Using the same towel to dry Jason off, she first held it over his nose and mouth, his breathing in of my scent slow almost to the point of meditative reverence. Somehow feeling it improper to watch this fully, frankly, and openly, I felt a little shiver of satisfaction as I noted, out of the corner of my eye, the steady stiffening of his cock in response to my aroma — impressive given the amount and the intensity of both the pleasure and the abuse to which it had so recently been subjected.

My own breathing somewhat ragged, I nevertheless worked to follow his example when — her last point of contact with his body having been a similar, vigorous and thorough, toweling off between his thighs — she brought the cloth up and pressed it firmly against my face.

I felt my cheeks and upper chest flush hot as — in reaction, the completion of a pheromonal call and response — my clit popped free of its hood and the outer lips of my cunt engorged with a rapidity that was almost painful and I felt them part slightly, as if in hunger.

“Greedy little pussy,” Genevieve murmured in breathy observation. “Greedy little mouth. And look!” she cried, a hoarse, passionate whisper — the middle finger of her free hand having darted between my thighs, just barely grazed my taint, before flying back up to tap me, gently but wetly, on the forehead, “It salivates!” her voice thick with desire and bright with wonder, delight at the discovery of some intriguing and improbable natural miracle: a Font of Passion in place of Ponce de Leon’s Fountain of Youth.

Throwing the towel aside, she then — also using only her hands — coated the two of us in unscented oil, from our necks to the tips of our toes, excluding only the soles of our feet, buffing off the excess with a fresh towel before she led us down into the dungeon.

Needing no instructions, we lay down, side by side, the gap between the two platforms wide enough that, our arms outstretched, we could barely graze each other’s fingertips — before Genevieve gently separated us, slowly, methodically, and meticulously binding us to the point of almost total immobility: wrists and ankles softly cuffed; legs in stirrups and canted slightly outward; belts across thighs, belly, and upper chest.

She stood back for a moment and just looked at us silently, her breathing calm but her eyes getting a little misty. Then, sighing softly as if in regret, she turned her attention to Jason’s “tie rack” carousel of implements of punishment, hesitating only slightly before taking down the thin, black, silver-buckled, snakeskin belt that I had come to both love and fear.

Shrugging off the short, black, silk kimono that was her only garment — while he did not always do this, Jason had often said that the nudity of a disciplinarian was a mark of respect for both the penitent and for the ritual itself — Genevieve took up a position between the two exam tables, extending the belt to each of us in turn, to reverently kiss.

“The snake is commitment,” Jason said, voice soft but clear, thoughtful but sure.

“The snake is commitment,” I echoed unbidden, in a tremulous whisper.

Genevieve padded slowly to the end of the table and stood between Jason’s outstretched legs. Leaning down, she lightly kissed his cock — rampant, reddened from what he had done to me with such vigor, a little tear of pre-cum leaking from the tip, pointing toward his chin — just below the crown.

With a little mewl of what might have been regret, she moved perhaps half a pace away, cocked one arm back — her hand poised above her shoulder, the belt hanging behind her, just to her waist — and lashed Jason three times in rapid succession, the belt actually making a swishing sound in the air, the first two blows yielding little ticking sounds as they contacted the flesh of his inner thighs, the third something of a splat! as it completed a triangle, landing on exactly the spot she had just kissed.

Moving quickly to his side, again between the two tables, Genevieve leaned down to whisper in his ear, loud enough for me to hear clearly — her free hand alighting between his legs, index finger and thumb ringed above his balls, which she held tight in the palm of her hand; the hand with the belt, just below the level of the table, between her own legs, those fingers in subtle, furtive movement.

“Painful, Little Jay-Jay?” she asked, as if curious and concerned — although, in both cases, only slightly so.

“Yes . . ?” she repeated with quiet menace, tightening her grip and eliciting a sharp intake of breath.

Genevieve gave a little hum of satisfaction and approval.

“You like pain?” she asked, voice now sounding drowsy, as though the question was interesting but ultimately not all that important. “Not just giving it but being gifted with it as well?”

Jason’s response was as indeterminate as it was inarticulate, not much more than an ambiguous sound, really.

“Do? You? Enjoy? Pain?” Genevieve said sharply, as if just coming awake, punctuating each word with a hard squeeze that elicited little, incompletely suppressed, yips of pain.

This drew a neutral hum, as though she were evaluating and digesting the information.

Turning away from him for a moment, she leaned down to whisper wetly in my ear, a giggly girlfriend sharing gossipy news, “Sometimes,” she matched his hiss, “he likes pain!”

She gave my ear lobe a quick, unexpected, nip and I heard myself unleash a small, strangled scream — and felt, between my legs additional, painfully intense swelling and another spurt and trickle of arousal.

Resuming her position between Jason’s legs, she cocked her arm again.

“Good boy,” she said soothingly. “And then?”

“And then,” he replied voice lit by an audible uptick of joy, “you’re going to give me to Mama Maura.”

“I am,” Genevieve said, tone thoughtful — perhaps a little wistful around the edges — then amending, “I’m going to give you to each other.”

She paused and looked over at me; we locked eyes.

How many months earlier?

Genevieve had been clear almost from the start: if Jason and Maura were to wed? It would not be him asking permission of Maura’s father — an archaic tradition none of them would have any part of.

It would be Maura that had to ask for Genevieve’s blessing.

My own climax she all but wrenched from my spastic, sweat-sheened body, her technique like Chinese water torture or the relentless ticking of a clock, just the very end of the snakeskin belt, the tip a sharply pointed triangle, which fell with metronomic precision and finely calculated intensity — over and over and over and over again — at the very uppermost edge of my swollen, hungry, increasingly, embarrassingly wet, denuded cleft, until, having screamed myself hoarse, I simply came apart.

Unbidden — still gasping for air — I babbled my gratitude: “Thank you, Mama Jenny! Thank you!” but she brushed that aside with a smile, her forehead too sheened with sweat I noticed, when she lightly grazed my cheek with her lips, assuring me that the honorific was not necessary.

“More sisters now, I should think,” she murmured.

“Siamese Sappho Sisters,” Jason opined, still bound beside me, not quite leering.

Genevieve was out of my field of vision for a few moments and I heard water running.

Then she was back, first swabbing my face gently with a cool, wet towel, then moving to Jason and doing the same for him.

Gone again for a moment, she was quickly back, with the squeak of rubber wheels, between the two tables again, a small cart before her, the top surface covered with a surgical towel.

“And now,” she said, a low-key game show announcer, voice tinged with happy mischief, whipping off the towel like a magician doing the crucial reveal, “the rings!”

She pierced me through the clitoral hood.

She pierced Jason just below the corona.

But — whether our respective lashings had sparked an endorphin high or a counter-intuitive, local anesthetic effect — it seemed like what we both experienced was more a surge of triumph, satisfaction, and love than anything else.

“I now pronounce you,” Genevieve intoned, surveying her work with seeming satisfaction as she unbound us, “officially affianced!”

Then, still eschewing clothing, we all went upstairs and shared an excellent bottle of Champagne.