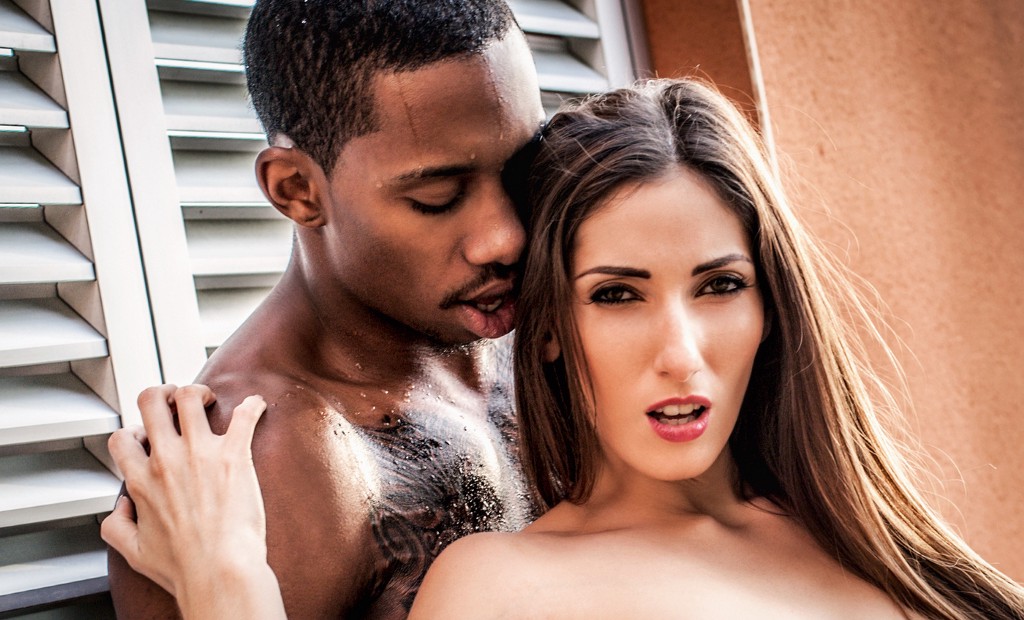 It was a hot day, and I couldn’t bear to wear clothes. When the doorbell rang, I frantically wrapped a decorative piece of fabric around me like a sarong, hoping I wouldn’t have to open the door.

When I looked through the peephole, what I saw was tall, dark, and handsome. I cracked the door open, peering through the gap, and said, “Yes?”

My eyes took in his tall form, long strong legs, a round ass outlined by his khaki dress pants, a broad chest, and a smile that made me melt. He didn’t say a word, but I swung the door wide and locked it behind him.

His eyes bore into me, barely noticing the fabric I had draped not so gracefully around my naked form. The air conditioning was blowing fiercely, yet the heat from outside was suffocating. Sweat was dripping from his forehead. I wanted to taste it.

I moved toward him, tempted to tear the shirt off him completely, but instead slowly began unbuttoning it while staring up into the depths of his dark eyes.

His voice broke the silence. However, I was unaware of the words he was speaking, I just let the vibrations of it slide over me, silky sweet, and I shushed him. Once his shirt was off I started on his belt buckle. Sweat was flowing freely from his body, and he appeared to be quite uncomfortable. He wasn’t making any moves toward me, and I knew why.

But I didn’t care. As his pants dropped to his ankles, he stepped out of them and his shoes at the same time. A tall, strong body like a magnificent decorative statue, erect and stiff. He wouldn’t sit down; I could see. I had to take the lead. I let the fabric slip, leaving me exposed for his eyes. His body was responding quickly, and he smiled. Again he spoke, but I was too deep in the trance of seduction to bother deciphering the words.

My body came to his, slippery and wet. He moaned in frustration, feeling both the desire and disgust at the same time. When I licked a trail of sweat off his neck, he laughed out loud.

“Come on, let me shower,” he pleaded. His booming voice broke the trance this time.

“No way,” I objected. “I love you just like this.” My hand moved to his cock, where he was already hard and ready. His mind and his dick didn’t agree on the situation.

I love hot, dirty, sweaty sex. I know he’s into soapy skin, so I was fresh from the shower, but I wanted to have him before he washed off.

I licked a horizontal line around his neck, standing on my tippy toes. He grabbed my waist like he wanted to lift me off my feet and away from his sweaty body, but I wrapped myself around him in protest.

“One time,” I pleaded. “I want you like this, right now, in the doorway, hot and sweaty.”

I reached between his legs, massaging his balls, and he let out a groan half in protest; but when his head tilted back in defeat, I took my opportunity and dropped to my knees, backing him up against the wall. I took his shaft between my lips, wanting to savor the flavor of his cock.

I swirled my tongue around the mushroom tip, teasing him by only giving my attention to the head until he began to move his hips a bit to encourage me to allow more inside my mouth. I let him in easily, swirling my saliva around him, letting him slide to the back of my throat. I relaxed my jaw and moved my head to stroke his whole cock with the inside of my mouth until I needed a breath of air.

When he slid out of my mouth, he took a quick breath of air and muttered, “Fuck.”

I knew I had him then. I backed him into the bedroom and onto the bed before I climbed on top.

His musky scent was intoxicating, and I wanted to taste every inch of him. I swirled my tongue around his balls, gently taking them into my mouth and sucking the soft sensitive skin. He was no longer thinking about his sweat and just wanted to be inside me. I felt myself being tugged up for a kiss, and then his cock was sliding along my wet slit. He gently teased my clit with his shaft while I enjoyed the feeling of his hot salty skin beneath me.

He tilted his hips just right, so he popped right inside my tight opening, stretching me wide with his deep thrust. I moaned into his mouth and then settled my face near his neck while he thrust into me. I moaned and shivered with delight and relished in the slippery friction between our bodies. My tongue was in a frenzy, licking, sucking, and nibbling on his neck, collar bone, and shoulders.

While I was bouncing on top of him, his hands came around to grab my ass and pull me onto him. I loved his strong arms wrapped around me and licked down to the elbow of one and back up again.

He placed his thumb on my clit, making it easy for me to explode, and then it was time to switch places.

I lay back, breathing heavy while he maneuvered my legs and took full control. He threw my feet over his shoulders and coiled me into a shape that allowed him to go even deeper than when I was on top, and I heard tiny gasps of pleasure escaping my mouth.

Then he got aggressive, flipping me over to enter me from behind. But first, he gave my ass a hard slap. I yelped, not expecting it but surprised by how much I enjoyed the jolt.

And he obliged. He spanked me and fucked me until I was writhing on the bed with the most intense orgasm of my life.

“I could have swallowed that, you know,” I said, reminding him of my preference.

“And I could have showered,” he retorted.

Melody Moons Follow
« Your Place Or Mine?
Anything for Dix »