Love in the Stacks 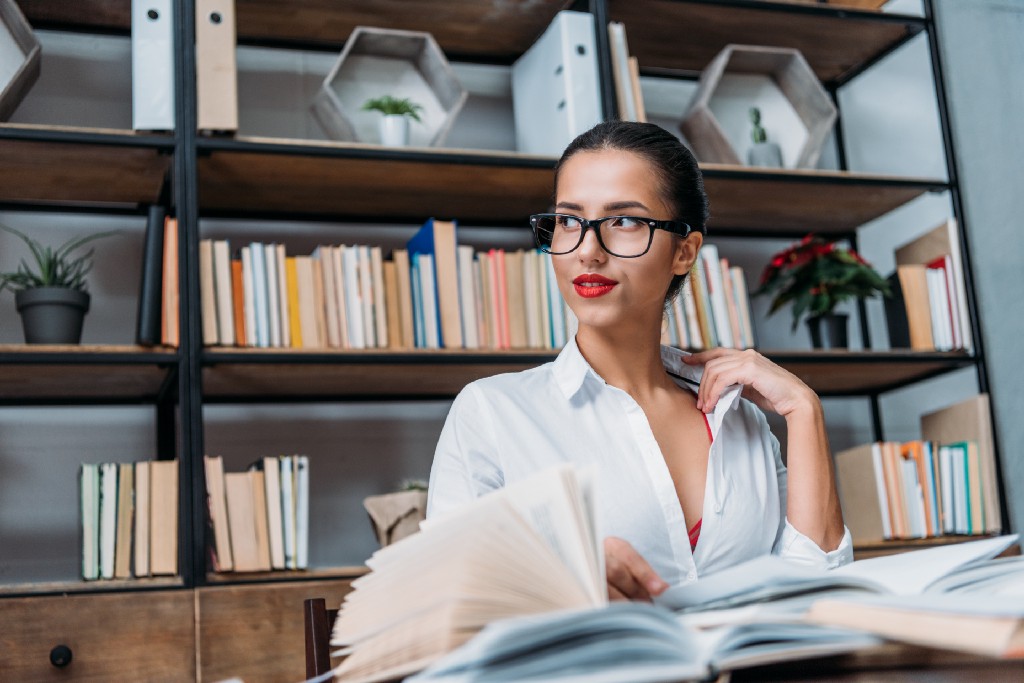 Brenda slid her glasses up and rubbed at her tired eyes. She’d been working on her thesis for a year and the end was in view, but she’d been staring at manuscripts and pictures of ancient documents for too long. She looked at her watch and squinted, wondering why it was blurry, before she realized her glasses were still on her forehead. She put them back on and saw that it was almost time to leave. The library would be closing soon and she didn’t want to hold up the staff.

There was a knock at the door to the special collections room. Then the door cracked open.

“Everything alright, Brenda?” It was Jacob’s voice. He was the chief librarian and was a gorgeous, kind, and brilliant man; and a widower. He poked his head in, black hair showing just a few strands of gray. Horn-rimmed glasses did little to hide his hazel eyes.

Just seeing his smile and the care in his face made Brenda blush a little, even after having gotten to know him over the last several months. “As alright as everything can be.”

“Well, what does that mean?” He came in and closed the door behind him. The smell of sandalwood and leather followed him.

“I’m stressed out. I think it’s only because I’m tracking down books that might not even exist any more.” She stood up, still a full foot shorter than the handsome librarian. She was a little self-conscious that she had on gym shorts and a tee shirt. She dressed for comfort for these long library sessions and it meant she could jog here and jog home. It was that routine that had given her a nice pair of legs and a firm bottom.

“Well, I know you know it’s closing time, but if you want to stay a bit longer and work some more, I’ve got things to do. It would be just you and I in the building. If that’s okay?” Was that a blush?

She nodded. “I’d like that. I need to take a short break but I feel like I’m so close to a breakthrough.” She rubbed at her shoulder. “I’m just so tight.”

“I’d be willing to give you a shoulder massage.” As soon as the words were out of his mouth, it seemed he regretted them. “That was too forward.”

She shook her head. “Not at all. You’re a good man, Jacob. I trust that you won’t do anything I don’t want you to do.” Brenda’s face warmed as she knew precisely what she’d like him to do. She’d like to be kissed by him and maybe more. She’d wanted to for months but didn’t have the nerve. The library was empty. Maybe she’d see if she could entice him.

His strong hands rested on her shoulders. “I have to say, it’s been nice getting to know you over the last year.” He began working at the knots in her shoulders.

Her nipples stiffened and strained against her sports bra. Just from that one touch. “It’s been nice getting to know you too.” When he worked on one spot on her right shoulder, she moaned. It was an almost embarrassingly naughty sound. “That feels so good.”

She put a hand on his working hand. “Jacob.”

“Did I do something wrong?”

She didn’t know if it was the fatigue or the knowledge that they wouldn’t have another opportunity like this, but she turned and stood. “No. But I want you to.” She grabbed him by his shirt collar and pulled at him. She pressed her lips to his and they were so warm and soft.

Jacob was hesitant at first, his motions stiff. When her tongue found his, they molded together. He tasted like coffee and spearmint. He bit her bottom lip and sucked it into his mouth.

Brenda moaned against him and could feel a hard heat pressing against her stomach. He wanted her as much as she wanted him. She ran her tongue over his teeth and her fingers nested in his hair. One of his big hands found a home at the small of her back, close to her waistband. The other cradled her jaw. She didn’t know how long the kiss lasted, but after a delicious eternity, Jacob moved his lips down to her jaw and then her throat. He nipped at her soft skin.

“Oh, Jacob, I’ve wanted this for so long.” She stared at the ceiling, shivering at his touch.

His hand grew bolder and squeezed her left breast. “I have too, darling.”

The pressure on her nipple made her stomach clench. “I want your mouth on me.”

Not wasting a moment, he brought her shirt and bra up and over her head. He nuzzled her dark nipples and suckled on them. Her sighs and whimpers grew louder as he kissed his way down her flat stomach and took down her shorts and soaked panties.

“Yes. Oh, yes.” She sat on the edge of the table and threw her legs over his broad shoulders. His hungry mouth on her damp flesh made her tingle all over. It had been too long since she’d had anyone down there and even then that person hadn’t half the experience Jacob must. He used his tongue, teeth, and lips to drive her crazy in just minutes.

She guided his head with her hands and soon felt his fingers probing and sinking into her. They hit just the spots she needed to be stroked, as his massage had earlier. The cool air on her skin and the heat from his fingers and mouth made her head spin. Soon, she felt the orgasm roll through her body like storm clouds. When she heard a distant rumble of thunder, she jumped and that movement took her over the edge. She came hard against him and cried out again and again wordlessly.

After the peak of pleasure receded she could hear rain and wind lashing against the sides of the old building. Jacob had taken her into his lap in the chair she’d been studying in only a half hour before. She’d never look at it the same way again.

“I hope you’re relaxed now?” Jacob’s smile was glossy from tasting her. “Sounds like I may need to give you a ride home.”

She patted his shoulder. “Now Jacob, don’t be presumptuous. I don’t take just anyone home with me.” She patted the table. “Besides, why go anywhere when you’ve got a perfectly good flat surface here?” They laughed and kissed some more as the storm howled around them.