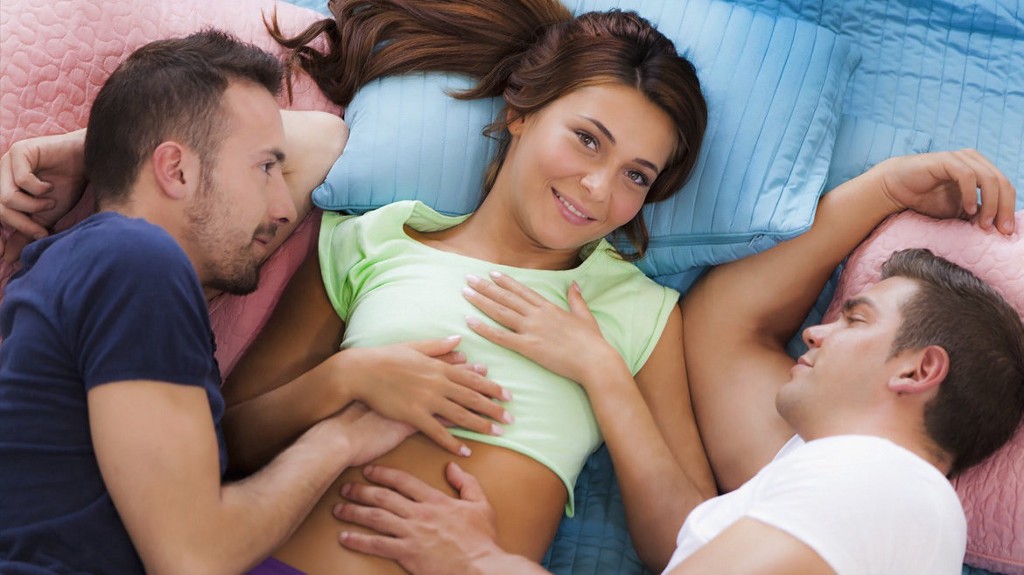 Part one: Mila is tag-teamed during a meet-and-greet with her online friends.

The night had started with ice-breaker games and a few rounds of shots, but it had culminated in Mila sitting tipsily on the bed in lingerie and being felt up by two of the men she’d met through her online circle of friends. She knew what the group was about — hell, she joined it for a reason — but somehow she still couldn’t shake the feeling of unbelievable luck as the handsome near-strangers gently caressed her body.

“Here, lie back for us,” Q, one of the men, said, gently pushing her down and pulling open the silky robe she wore. Underneath it she was bare, and she felt herself blush shyly as the two of them gazed down at her body. But between the booze in her system, the atmospheric red lighting of the room, and the music playing softly in the background, she found herself melting beneath the sensual touch of the two men.

Hunter, the other man, said nothing as he sucked one of her nipples into his mouth. She arched her back and moaned as Q joined in, both men lapping and swirling their tongues around her sensitive buds. Their hands continued to caress up and down her body as she writhed with pleasure.

“So sexy,” Q murmured as he pulled away from her and positioned himself between her legs. “Lift your hips,” he said gently, sliding off her silky panties and baring her wet pussy. With practiced precision, he began to lick her sensitive clit and hummed his approval as her hips bucked involuntarily. Above her, Hunter squeezed her luscious breasts together so he could suck and nip at both of her nipples. Her moans grew louder as their talented tongues made sparks of pleasure dance from the V of her thighs to her nipples and back again. The erotic sounds of her buds being lapped wetly and her pussy being sucked and licked drove her pleasure even higher.

“Please,” she begged mindlessly, close to the edge but not quite able to find her release. Q knew what she needed though, and slowly slid two fingers inside of her, tilting them just so while his tongue swirled her clit. At the same time, Hunter gently bit down on her nipples and licked the pain away. She began bucking her hips again, now in time with Q’s fingers. Finally, she came on the firm thrust of Q’s hand, riding the wave of pleasure for what felt like minutes.

When she finally came down, Q was on his knees, cock in hand and slowly finding his way inside her. His width and length lit up pleasure centers all along her channel, and all she had the power to do was lie there and take his delicious, merciless thrusts.

Hunter put a hand around her neck and began whispering in her ear. “Give it to him, go on,” he encouraged. “Come around that dick.”

But she was already there, squeezing Q like a vice as she came and came, pussy gushing and sucking him in greedily. She was helpless to the demands of the two men — pinned to the bed by her neck, legs spread wide, and pussy being thoroughly used. And she loved every second of it.

“Squirt again,” Q demanded while Hunter still had her pinned. “I love that shit.”

She didn’t know how many orgasms the two men were able to coax out of her by the time Q pulled away and left her limp and quivering on the bed. She didn’t have long to ponder it, however, because then Hunter was kissing her long and deep, massaging her breasts as he did so. With a hungry expression, he pulled away and looked down at her.

He pulled her into a kneeling position on the bed and immediately slid himself inside of her warm, slick pussy from the back. Hooking his arms under her underarms, he pulled her shoulders back so that they were upright with her back arched and breasts pushed out. She realized with equal parts arousal and embarrassment that the other members of the group had gathered to watch. Her pussy gave an excited, involuntary squeeze as she realized Hunter meant to fuck her in front of everyone.

“Oh, you love this,” he whispered as he pumped into her, the sound of him slick and wet. “You love being watched, girl. That pussy is so wet.” He picked up his pace, slamming into her from the back as her breasts bounced and jiggled in time with his thrusts. “Tell them you like being watched.”

She looked at the crowd with faraway eyes and obeyed. “I love being watched.”

“No, say ‘please watch my little pussy get pounded’,” he commanded, his pace getting even faster.

“Please watch my little pussy get pounded,” she moaned loudly, the excitement and humiliation sending her towards the edge again. Around the room, she heard murmurs of appreciation and encouragement. This was happening. She was getting fucked in front of an audience!

Lying her down on the bed, he gave her a peck on the lips. “Take a break, sweetie. The whole room wants to fuck you now.”

Don’t forget to follow me here on Medium for more sexy stories.