Interlude on a Subway Train 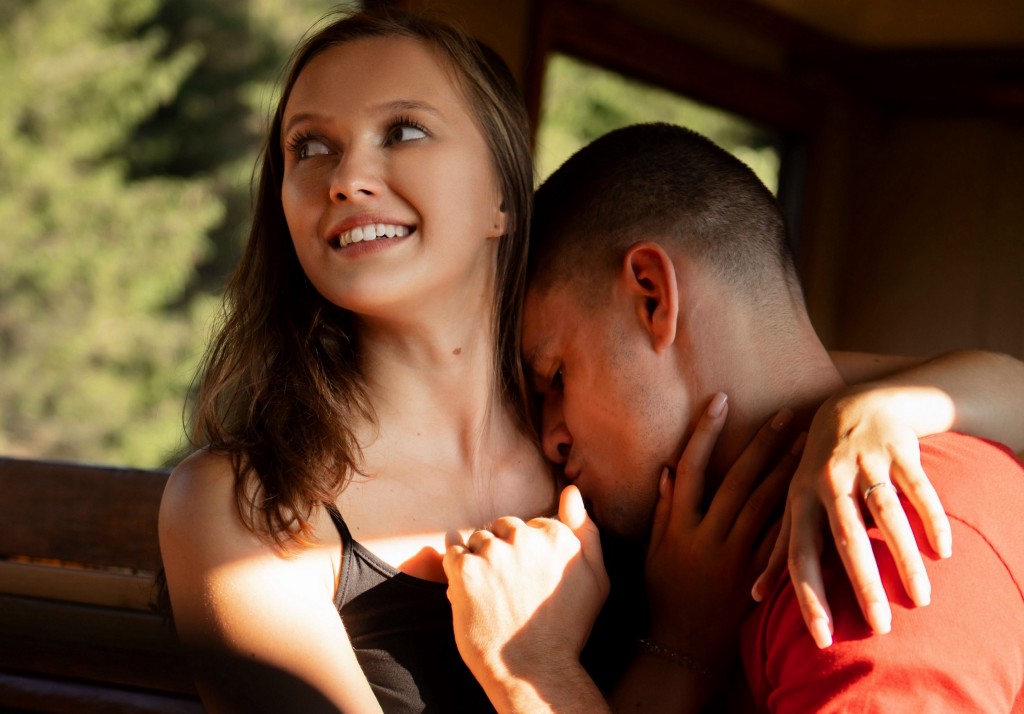 I’m sure they were married even though they never said so. In fact, they never uttered a word to me except for those she whispered into my ear at the very end. But there were signs. Some were obvious like the matching bands on their fingers. Others were more subtle, as in the way they looked at each other.

They communicated with simple glances.

It was past midnight. I had been studying at the school library far longer than I had wanted to. I was tired.

The train was hurtling through a tunnel. This was the longest stretch between stops. The dim interior lights flickered occasionally. The thrumming sound of the subway as it raced over the tracks, along with the gentle rocking motion of the car, had been lulling me into a mellow hypnosis.

They had entered the train at the last downtown station.

She was a pale goddess in a little black dress, all legs and flowing dark hair. He was a mountain, square-jawed and confident in his Italian cut tuxedo, the bow undone and hanging loosely. Perhaps they had just come from a show?

The couple had seated themselves, facing me, across the aisle. We were the only passengers in this car, perhaps the entire train.

At first, I thought I was hallucinating when I saw him reach for her bare knee to slowly part her shapely legs.

Her eyes were smoky and seductive. His were kind. They were both smiling at me.

She lifted the leg that was closest to him and placed it on top of his thighs. The hem of her short dress fell back and with her legs obscenely spread, I could see her cunt clearly, glistening with moisture and parted slightly in wicked invitation.

Hers was not a modest pussy.

Her cunt lips did not hide chastely between a protective sleeve but protruded proudly and aggressively from the mound of her perfectly smooth skin. Dark, fleshy and wrinkled, they demanded to be licked, sucked, stretched open, and tugged at. I swallowed nervously and looked back up.

She was beckoning me with her finger. In surprise, I turned to him but he was nodding encouragingly.

I found myself kneeling between her outspread thighs as if in prayer at the altar of the sacred feminine.

She shifted her hips forward, draping her long legs over my shoulders. I heard her sandals drop to the metallic floor behind me. She used the heels of her bare feet to pull my body into that wondrous nether space between her open, creamy thighs.

Her aroma was intoxicating.

I caught hints of a floral sweetness that was her natural perfume along with the tangy saltiness of her sweat. I breathed it in and felt my cock stir insistently in my jeans. My tongue flicked out, making a tentative pass over the rough texture of her lips.

She tasted better than the best dessert I’d ever had.

I bit down gently and pulled my head back, stretching her like taffy until she twitched and tightened her grip on my head with her thighs. Hungrily, I wrapped my mouth around her cunt lips and sucked them entirely into me. Swirling my tongue amongst the fleshy folds, I relished the sensation of having so much pussy inside of me.

As she started to moan quietly, I felt his hand, big and rough, grab the back of my head and press it firmly into her cunt. With nowhere else to go, I parted her swollen lips and struck a motherload of creamy wetness deep inside. Using the tip of my tongue, I scooped it up and greedily swallowed. My hard cock strained painfully against its imprisoning denim as the delicious essence of her sex slid down my throat.

I shifted upwards to find her clit.

It was as large and audacious as the rest of her pussy.

I had no trouble tracking it as I circled all around its engorged circumference. When I used the hard tip of my tongue to methodically flick it back and forth, she started to gyrate her hips around my face. Her clit grew thick and long with my ministrations until I could eventually suck it whole into my mouth like I had her pussy lips.

Somewhere above me, I thought I heard the sounds of their kissing but I couldn’t be certain. I was in complete darkness and near silence, in the void of her crotch, with her powerful thighs pressed tightly into the sides of my head.

Her moans turned into primal, throaty gasps as she started to buck her pelvis, fucking my mouth with the length of her clit. All the while, his powerful, unrelenting hand made sure to keep my head firmly in place. There was nowhere I could go — although in truth, there was nowhere else I wanted to be.

It wasn’t long before I sensed that she was going to come in my mouth as her breaths grew short and the unrelenting grip of her thighs became almost unbearable.

I felt myself getting light-headed from lack of air but I couldn’t bring myself to pull back. I wanted only to breath her and drink her and consume her. In that moment, my reality consisted only of my mouth sealed tightly around her pussy.

He suddenly let go of me and I felt her grab the back of my head, snaking her delicate fingers through my hair to press me violently into her. It was as if she was trying to push me whole through the tight portal of her throbbing cunt.

And yes, I still wonder, at times, if it wasn’t all just a dream.