Hot Night at the Drive-In 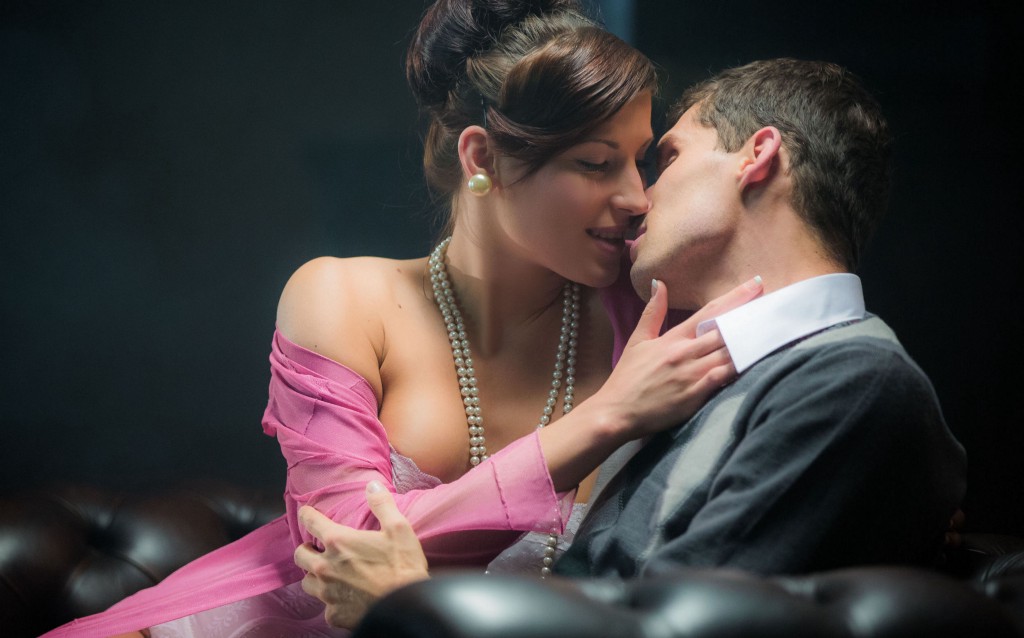 A Sequel to Annie’s First Orgasm.

Three rows back, in David’s 1949 Plymouth Special — top-down to get relief from the heat — Annie opened her legs a little wider to make room for David’s hand which had slowly made its way up her leg and was now wedged between her thighs. She squeezed her legs together, locking his hand into position, without taking her eyes from the screen.

David let out a soft groan. Annie took this to mean he’d discovered her secret — she had nothing on under her skirt — and had soaked through the thin cotton.

It was not her habit to go out without underwear and she felt downright wanton — in a good way. Annie had been sitting at her dressing table, daydreaming about tonight, and the things she’d let David do to her now that they were officially engaged, when her mother had knocked on her bedroom door to tell her David had arrived. She’d slipped off her damp panties and tossed them into the laundry hamper. Liking the feel of soft material on bare skin, she’d made the impulsive decision not to put on a fresh pair.

Now, Annie wiggled her hips seeking more contact. David’s hand curved around the fleshy part of her thigh, his pinky finger pressing so deeply into her most private place that she felt her swollen lips separate right through her skirt. The little nub buried within her folds hardened, her face flushed and her heart raced. Annie squeezed her thighs together and began to gyrate, the movements so subtle that she was certain no one — not the person in the next car over, or anyone who happened to pass by with refreshments — would notice.

Her eyes closed on their own and she brought her hand to her mouth, biting down hard on her finger, to keep from making any noise. Her hips moved faster, lifting up off the leather seat as she pressed harder into David’s hand. She was getting close, so very close when an unfamiliar male voice jolted her from her goal.

“David — I almost didn’t recognize you.”

Annie relaxed her thighs, instantly releasing David’s hand. She was mortified when he offered that same hand to the man standing at the driver’s side window.

“Benjamin. It’s been a while. How you doing?”

“It’s been rough you know, real rough. I’m getting by though. You?”

David made introductions and Annie gave the man a little wave.

Benjamin offered his congratulations. A car horn honked and someone called out for Benjamin to quit blocking the screen.

“I guess I’d better get back to my girl. Let’s get together sometime.”

“Sure,” said David, in a tone that indicated he didn’t mean it.

Annie was about to ask David how he knew Benjamin when she saw, by the light of someone’s flashing headlights, the crutches and the stump where Benjamin’s right leg should have been.

“He was in Korea with you?” Annie asked.

It had been five years since the war ended, more than six since David had come home to recover from his injuries. Annie hadn’t met David until last year. All she knew about that time in his life was that he didn’t like to talk about it.

“That was close,” David said, giving her the smile she loved so much. “Almost busted.”

Annie wrapped her arm around his neck and kissed him hard. They were full-on necking when someone passing by the car called out, “Ooh, la la.”

David put the key in the ignition and brought the engine to life.

The movie was only half over.

“Where are we going?” Annie asked.

By the time they reached David’s apartment, Annie had started to worry. Yes, they were engaged, but they hadn’t even set a date. Until recently she’d been certain that she’d wait for marriage to go all the way. She didn’t want to be the girl trying to convince her relatives that the seven-pound baby was born prematurely. Her parents would be mortified if she were the subject of rumors. Just being here alone with…

“Stop worrying,” David said, as he poured them each a screwdriver.

Annie took the glass and chugged down half of it.

“Don’t make yourself sick. That wouldn’t be any fun at all.”

Annie was more than ready to have some fun. She set the glass on the kitchen counter and wrapped her arms around David, molding her body to his. She could feel him hard against her belly.

“Annie, there’s something I have to tell you.”

Startled by the seriousness of his tone she looked up at him.

“You know I was injured, right?”

“Yes, though you’ve never told me how or where…”

“The scars…they’re not pleasant to look at. I’m afraid — ”

“Don’t be. You know I’ll love you no matter what.”

Annie tugged his shirt out of his pants and slipped one hand onto his warm belly. “Show me.”

She looked down at the front of his pants and back up to his face. He nodded. She’d never seen David look so vulnerable. Annie unbuttoned his pants. David helped, lowering his underpants as well, letting both slide down his legs and come to rest at his ankles.

The sight of his erection distracted her, and she touched it right away, wrapping her hand around its width, brushing her thumb across the silky head. It jumped in her hand, alive in a way she hadn’t imagined a penis would be. David groaned and swayed a little.

Annie saw it then, the wrinkled skin on the left side of his shaft, the deep and ugly scar that covered his hip. Even the heavy sack had been damaged.

“I lost one, but the other one works. The doctors say I can still have children.”

Annie looked up into his eyes and saw the fear — fear that she would reject him because of this.

He’d won a medal — she knew this only because his sister had told her. He’d saved another man’s life. Just as important in her mind — he’d survived.

Annie dropped to her knees on the cold tile floor. She ran her hands up his thighs all the way to his hips, tracing the scar with her fingers.

She pressed her lips to his scar and then used her tongue, licking the rough ridges.

She switched to his sack, kissing the damaged side first and then the healthy one. Using both hands she lightly stroked his organ.

Annie thought of David himself, damaged but not broken, still able to smile after all he’d been through. She started to stroke harder, but David stopped her. He helped her to her feet and led her to his bed.

With trembling fingers, Annie unbuttoned her blouse and dropped it on a chair, while David sat on the end of the bed watching. She removed her brassiere and discarded it as well.

“You’re beautiful,” David said, grasping her hips and drawing her in between his knees.

He pushed her skirt down, took in her damp pubic hair, and smiled. “And full of surprises.”

Annie took his face in her hands and brought him closer. He planted a kiss on her softly rounded belly before moving onto her breasts, cupping them and gently sucking her nipples one at a time.

He released her breasts and dropped his gaze. “You’re ready aren’t you?”

He spread her open with two fingers and touched her clitoris. It was so sensitive that a direct touch was too much — almost painful — and her hips jerked backward.

David gently eased her onto the bed and stretched out beside her. With his fingertips, he stroked her gently in a circular motion.

It only took a few strokes for Annie to climax.

Before she’d even caught her breath, she reached for him, wanting him inside of her.

When he turned away she asked, “What are you doing?”

David placed a pillow under her bottom and knelt between her spread legs. Annie kept her eyes open, watching as he guided his sheathed cock to her opening. First, he pushed a finger into her pussy.

It was a tight fit.

“I want this,” Annie whispered. “I’m not afraid of a little pain.”

Not until after, lying naked in his arms, a bit sore but in no hurry to leave his bed, did it occur to her that David must have been expecting this to happen. Not sure how she felt about him being prepared, Annie asked, “How did you know I’d be willing?”

“Oh, Annie,” David laughed softly. “Did you really think you were hiding your desire from me?”

Annie blushed to know just how transparent she’d been. “Let’s not keep anything from each other, okay?”

“That won’t be easy,” David said, his voice turned serious.

“I know. But let’s try.” She reached down and touched his scarred hip. “You can start by telling me how it happened.”

David nodded and started talking. It would be hours before he stopped.

Let’s keep in touch! I’m on twitter now, and I’ve started a newsletter. Links to both are on my profile. https://medium.com/@rebelrainewrites