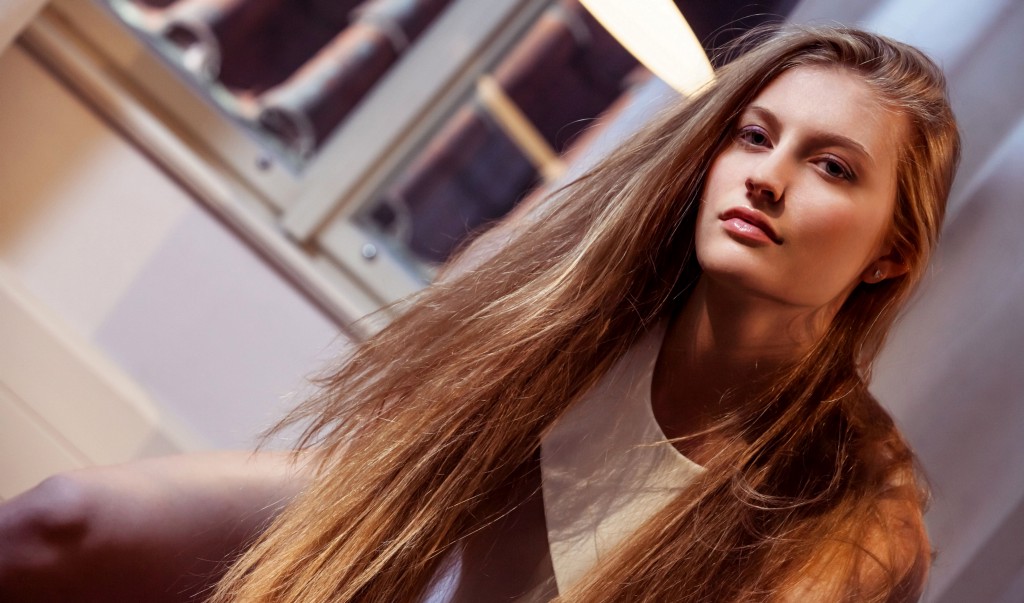 I worked from home about twice a week and I assumed he did, as well. At least, it would make sense for him to be leaning over his balcony, pensively drinking coffee at 11am, if he worked from home. My desk window faced a large picture window of his and I surreptitiously observed him every week. Not stalking, that would be creepy. But he was there, right across from me, on this narrow tree-lined street with pre-war brownstones. It was hard not to observe him.

He liked to run. I would see him coming back from one in the late evenings. He had a dog that clearly adored him. He seemed to read books more than he was on his phone. Maybe that was to counteract the hours spent on his laptop. I could sympathize. Sometimes your eyes just needed a break.

It got to be a bit of a routine. On the weekends he would head out with the dog just as I was getting home from the diner. On weeknights he would do pushups on the balcony, after his run. That was a rush. Sometime he was shirtless and I would hide behind my curtain, savoring the sight of those lean muscles as long as I could. The weather grew warmer and the whole street left their windows open late into the night. He had blinds that never seemed to be shut and my diaphanous curtains once again concealed me as I looked across, trying to piece together his life through the little squares afforded me.

He liked nice things. His apartment seemed clean. There was a guitar hanging on the wall and one afternoon I heard him playing it. Sometimes there was a chair on the balcony and the dog would curl up at his feet during the sunset. What a great guy, I thought. It’s incredible he seems to be single.

One night I got up late for a drink of water and checked on him on the way back to my bedroom. That had become my new routine, seeing where he was and having an imaginary conversation with him in my head. Oh, those pancakes you made look so good, honey. How about a few more? But not until you kiss me first! I blushed at my stupidity and scanned the windows. They were dark…no, wait.

The TV was on in the living room, casting an eerie blue glow over the dark form on the couch. That was him. Maybe he had fallen asleep there. I was about to turn away when I caught his hand moving between his legs. A small motion from this far away but still noticeable. He was lying away from me, top of head to window, but the angle allowed me to just look down on him. He was definitely rubbing, slowly, but I couldn’t see his cock, only the motion of his hand. I could tell by his stroking that he wasn’t small. My face burned, wondering what he was watching on the TV. Once again the angle frustrated me. I couldn’t see the TV, his cock, his face, just his arm and hand moving in an unmistakable rhythm. I watched for as long as I could, heart pounding, until the arm stilled. Perhaps he had fallen asleep. I tiptoed to my bed (why I did that in my own house I couldn’t understand) and tossed around, thinking about the handsome man falling asleep alone on his couch, cock in hand. Such a waste.

A few days later I thought I ran into him at the corner drug. It was tough to be sure. I hadn’t seen him up close before, just from across the sidewalk. The hair, the eyes — it had to be him. And he stepped aside to let an elderly man go ahead of him in line. What a sweetie. Now I had that to think of along with everything else. The dog, the runs, the guitar and books, the mysterious TV and the unseen cock which seemed to get attention from only his hand. My days grew anxious and my nights frustrated.

I should really introduce myself, I thought. But what to say?

Hi, I live across the street and I’ve been watching you. Yeah, right. Hi, you’re so hot and I’d love to run with you sometime. Run? I did well to get through one yoga class without falling over. And so it went. I wondered what books he had on those shelves, what color his bath towels were, what was in his fridge. Would we get along? Did we have the same tastes and interests? In my mind we did. There was always plenty to talk about, we laughed and joked with each other, and his eyes smiled at me in the dark.

One week there was a girl walking the dog with him. Finally, the girlfriend, I thought. Maybe she was away for work. And a few nights later they bounced up the sidewalk together, clearly coming back home from a party. She had a balloon in one hand and it bobbled in the doorway before the heavy door shut behind them. I closed my curtains. They will have a fun night together, I thought. In the deepest recesses of my mind I imagined them fucking all over every flat surface, for hours and hours. A runner like that would have incredible endurance. I shut my window and turned on the AC. Maybe she was a screamer.

I got up in the pitch black, once again for some water. I peeked across the street out of habit and everything seemed dark. Impulsively I turned off the AC and threw up the sash. These old windows had the deep-set cornice and iron bars that made it almost like a tiny balcony. I could sit on the windowsill and be out in the night air, listen to the rustle of the trees. That’s what I needed. The quiet of the street covered the interstate bustle just a few miles away and I sat there, bathrobe falling open, welcoming the breeze.

There it was again! My heart pounded as I caught the blue TV glow, this time coming from his bedroom. I sank back against the bars and found the perfect spot through the trees. It WAS him. The angle let me see the bottom portion of his bed. He was alone? How could that be? Again my heart pounded as I watched, expecting the girlfriend to show up any moment. She didn’t. The TV faced the bed from the opposite wall, the window between it and the bed. I couldn’t see his torso but his hand was there, squeezing his cock through the sheets. My mouth went dry as a siren blared in the distance. I held my breath, straining for every detail I could find. The curve of the sheets over his legs, the flicker of the TV, his hands appearing and disappearing in the corner of the window, just out of my reach…and for a few precious minutes, nakedness. He pushed the sheet down and I saw him, hand curved around his cock, the head just visible above his closed fist. Hot and cold flashed all over me and there was nowhere on earth I wanted to be more than in that bed with him, rolling around with my legs locked around his waist.

Then everything went black and I looked down at myself. I was sitting there with spread legs, touching myself bare as I sat on my own windowsill, open to the night and the light shining through the branches. I was wet and my hand was buried inside my pussy.

I looked down at myself as if he was actually there, my body tense and trembling, holding onto one of the window bars for support. My breath was short and focused, a film of sweat covering my skin as I got closer. He was standing up now, spreading my legs wider, spearing me deep with that cock in the quietness of the night between the trees. We didn’t care who saw. He wanted everyone to see him possess me. I was his. Who wouldn’t want to watch us fuck, grabbing and biting at each other, trying to control our passion but noises spilling out from mouth glued to mouth. The angle was perfect, he was perfect, I didn’t need to teach him, he just knew…and he didn’t stop, even when I clamped down on him and shook. That only spurred him on and he braced himself, driving through the spasms. I knew he wouldn’t stop until I was spent, until I had given him every last shudder and tremble, and then he would cum, filling me up so much I would overflow and splash onto the tile beneath us. The sound was like a waterfall in the night, a nuclear blast that shook the sleeping birds from the branches and splintered the windows.

I sat there, quietly panting and gathering myself together. The breeze floated over my sweaty skin and I closed my eyes, tilting my face to the sky and slowly pulling my soaking fingers from my pussy. It was quiet again except for the whoosh of my heartbeat in my ears. It was some witching hour by now, past midnight, the depth of the night heavy in the coolness.

I tipped my head forward again and opened my eyes. His balcony was directly across from me and one of the doors moved. Still in a trance, in slow motion disbelief I watched him step out almost naked, a towel around his waist and his gaze shooting like an arrow straight between my legs.