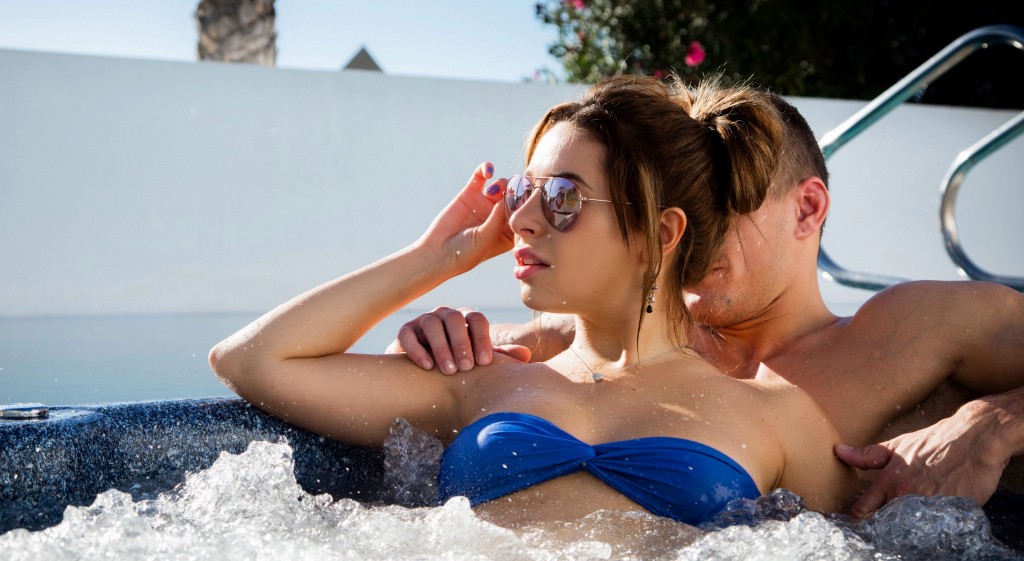 The owner gave me one rule for using the hot tub — turn on the fan and keep the atrium door closed to prevent unwanted visitors. I’m assuming she meant Casanova, the neighbor’s cat, who thinks he owns the place.

I’ve taken the liberty of wearing Miranda Kane’s white silk robe. It’s a form of foreplay in itself — a sensual caress on my bare skin as I make my way through her beautiful home, getting everything ready. I’ll be taking some liberties with her jets too — it’ll be the closest I’ve come to sex in months.

I drape the robe over a chair and flip the switch for the fan. Nothing happens. I try it a couple more times, with the same result. It seems I’m going to have to break a rule. But isn’t it better to open the door than to let the room steam up?

The French doors open into a small, private courtyard. A gate separates this backyard from the neighbors. With the doors fully open, a cool breeze sweeps over me, hardening my nipples. Something soft swishes against my calves. It’s Casanova, strolling into the house as if I invited him. I suppose I have.

I don’t mind the company.

I put my feet into the water, and sip my chilled Chardonnay. Behind me, the cat purrs and rubs his face against my lower back. I reach behind me with one hand, stroking his fur. A strong breeze whips into the atrium and I shiver. Heat. I need heat.

I know from past experience that a properly placed stream of water will bring me to a quick climax, no hands required. I’m not looking for quick, not tonight.

Without turning on the jets I slide into the tub, lean my head back, and close my eyes. I think of ex-lovers, favorite actors, and my cousin’s husband, who happens to be one of the hottest men I know, but none of the usual fantasies feel right. Not even the old favorite, the one where Professor Maxwell needs to punish me for turning my paper in late, is going to do it for me. I’m not in the mood to be a bad girl in need of a spanking.

The water laps at my breasts. I’m pinching my nipples when I hear a whooshing sound. The jets are on. How can that be?

There’s a man standing at the edge of the tub. I take him in, every delectable inch. He’s older than the college guys I’m used to — mid-thirties at least — slim and fit. The strategically placed small white towel is held on with one hand, leaving his right hip exposed.

“I thought the jets were broken.” He releases the towel and slips into the tub before I can respond.

“But the door’s open,” he says as if this explains everything.

“The cat wanted to come in.”

He laughs softly. “Casanova isn’t the only one who is allowed to come in when the door is open.”

“Oh.” Miranda’s warning makes sense now. “This is a bit awkward isn’t it?”

“It doesn’t have to be.” The seduction in his voice ignites my desire.

He spreads his arms out along the sides of the tub, casual as can be. “I didn’t realize Miranda was traveling this week. She used to be so good at keeping me updated on her work schedule.”

“I don’t think this is work-related. She said she’d be in Vegas for a few days, and then LA.”

“Well, that explains it. She must be seeing her ex again. And after swearing it’s over for good this time.”

“You don’t seem particularly bothered by it if you don’t mind me saying.”

A smile spreads across his lips and I imagine those sensual lips encircling my nipples, slowly, one at a time. “Lover is such a quaint term. I’m surprised to hear it used by someone so young.”

“I’m not as young as I look.” I reach for my wine glass, intentionally rising up out of the water, giving him a good view of my small but perky breasts.

“Miranda usually hires college girls, many of whom aren’t yet old enough to drink.”

“I’m a grad student. Plenty old enough to buy it, drink it, and even offer to share it with a stranger.”

“I would love a glass of wine. Shall I fetch a glass or are you willing to share that as well?”

I stand up and move into the middle of the tub, with the wine in one hand and the glass in the other. His fingers brush mine when he takes the glass. He swishes the liquid around, his gaze resting on my breasts, before taking a sip. “A little too sweet for my taste, but not bad.”

Instead of handing me the glass he sets it behind him, leaving his arm along the edge of the tub in a wordless invitation to sit closer. I accept.

We exchange names (Mark and Vanessa) and small talk as if we’ve just met in a bar and aren’t already naked and very much alone together. It’s clear where this is headed — we won’t have to bother with such questions as ‘your place or mine’ — it’s only the details that await us now. I’m very anxious to get to the details.

It’s taking him far too long to make a move, and I’m feeling particularly bold tonight. It might be the wine, it might also be the throbbing in my clit, which is feeling sorely neglected of late.

Mark’s lips are moving, but I’m not listening. I’m focused on his full soft lips… “I want your mouth.”

A slow sexy smile parts those lips. “Where? Where do you want my mouth?”

I stand up, move between his knees, and offer my breasts, one at a time. The man knows exactly what to do with a nipple. How could he not with a mouth like his? Lips and tongue, slow teasing strokes followed by total immersion in his hot mouth. I’m started to sway from the wine, the heat, and my need when he stops sucking and starts talking.

“It’s time to dry you, off little girl, and put you to bed.”

“I don’t want to go to bed.” My voice comes out a girlish whine, not something I planned. “I want to stay up and play.”

“It’s too late for that and I don’t want to hear any arguing. Put up a fuss and I might have to spank you.”

“No spanking. I’ll be a good girl.” I take his face in my hands and kiss him once on the mouth. “I want a dozen good night kisses.”

“Your mouth will get sore if I kiss it a million times.”

“Then kiss me somewhere else.”

His hands are resting on my hips. I grip his biceps, enjoying the game, though the heat is making me dizzy. “Everywhere.”

“That’s a request I’m happy to grant.” Mark helps me out of the tub and proceeds to dry me off with the towel. “We can’t have you dripping water all over the rug, can we?”

I look deep into his light green eyes. “I am very wet.”

His hands curve around my ass and he presses his hard cock against my belly. “You’re a naughty girl, aren’t you?”

“Yes, but no spanking, only kisses.”

He kisses me once, thoroughly, before leading me into Miranda’s bedroom where he unmakes her bed in one quick motion, leaving only a bare white sheet.

“Lie down on your belly, and close your eyes.”

I do as he says, my body quivering in fear as well as anticipation. I’ve never felt so vulnerable with a man. I hear him moving about the room, opening and closing a nightstand drawer, and my fear increases. I’m imagining tools of torture — what if he and Miranda are seriously into kink? My clit tingles at the thought, but my mind isn’t so brave. I turn my head and open one eye.

The objects on the nightstand ease my mind. Lubricant and condoms, a candle. He catches me looking and touches my cheek. Those perfect lips curve into a reassuring smile as he lights the candle. I close my eyes. The overhead light clicks off.

Mark starts at my feet, kissing the sensitive arches before moving on to my calves, and then the backs of my thighs. He kisses my ass, licks along my crack. I’m gushing. I’m going to leave a wet spot on Miranda’s sheet.

Mark’s moving on to the small of my back, leaving a trail of kisses along my spine. When he reaches the back of my neck I turn over, seeking his mouth once more. He gives it to me, but not for long.

Shamelessly, I spread my legs.

Mark gives me a sexy smile. “What’s the magic word?”

“Say it. Tell me exactly where and how you want me to kiss you.”

As if my face wasn’t hot enough, I’m blushing now. I’ve never been one to talk dirty, never even considered it. “Lick my pussy, please.”

Mark chuckles softly, whispers, “Good girl,” and moves between my legs. He spreads me open and flicks at my clit with the tip of his tongue. I let out a moan and slip my fingers into his wet hair, urging him to continue.

Mark is in no hurry. He dips his tongue into my opening. “You taste so good.”

I spread my legs wider and lift my hips, but his teasing continues. I’ve been eaten before, but never like this — as if my pussy is a rare treat to be savored.

I want it to go on forever. I want —I need — release. When I can no longer stand it I hear myself whisper, “Please…”

Mark moves off me, and I let out a guttural groan — a sound I’m quite sure I’ve never made before. Sitting on the edge of the bed, he looks over his shoulder as he tears open the condom. “I’m not going anywhere, sweetheart.”

“But I was almost there…”

I watch him roll the condom on.

“Yes. Very much. But I never come that way.”

“Let’s see if we can change that.”

We’re trying out our third position — I’m on top, riding him so hard my thighs are burning — when he presses my clit with his thumb, massaging in a circular motion. I’m getting close, and I know it’s going to happen this time, when Mark says, “It’s time little girl, time for you to come.”

His magic words send me over the edge — my cries so loud they startle poor Casanova who jumps from the dresser where he’d witnessed everything.

We’re in Miranda’s kitchen eating her brie and crackers, and starting on another bottle of her wine, when Mark says, “You’re not so young as I first thought.”

“Neither. Just an observation. Do you want to go out sometime?”

“You mean besides fuck?”

“When you put it that way — I don’t really care what else you like to do. We can do this — fuck — again and again.”