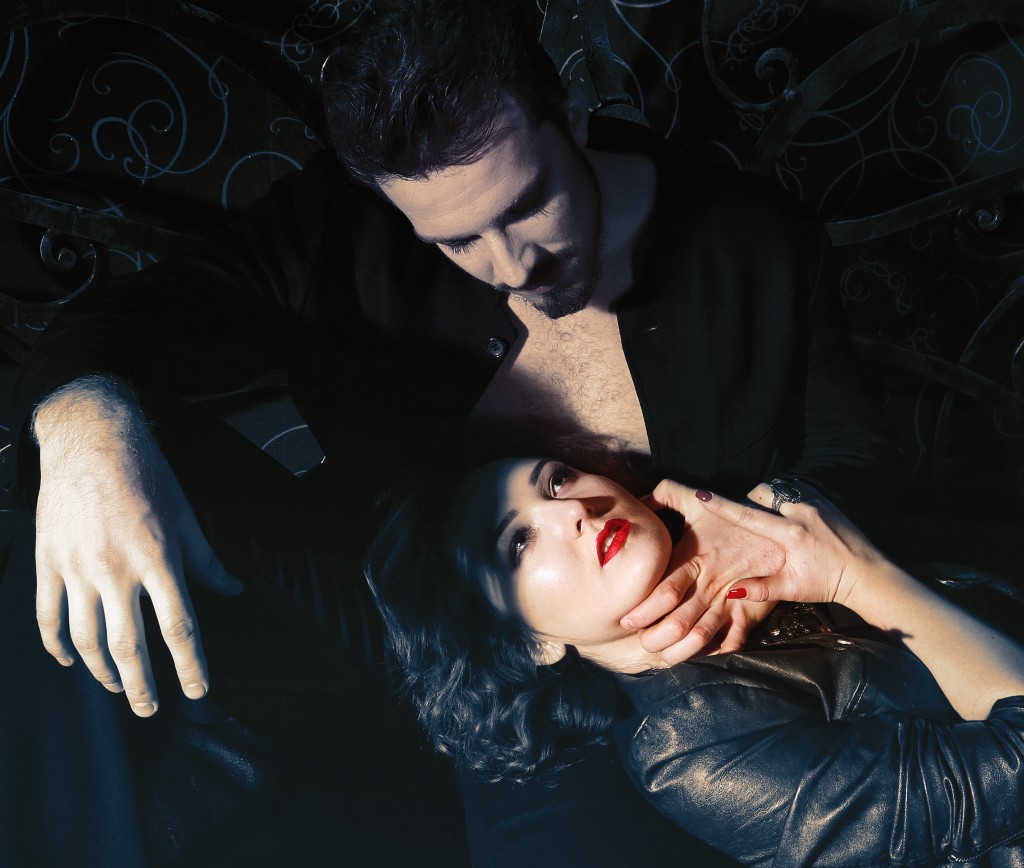 He had flicked my nipples with his razor-sharp nails — the wounds painless but deep — and he had then suckled there tenderly, drinking down my blood like a man too long in the desert and desperate for water, needing his thirst not merely to be slaked, rather: needing fluid if he were to have any possibility of survival.

I had tried to hold his head to my breasts, wanting only to give him more, tried to stroke his sleek and shining hair, to caress his ears, his cheeks, his neck, but it was as if there were a halo, a nimbus, of energy — static electricity, a magnetic field — that held me back; my hands instead helplessly, desperately, pawing air, scant inches away from touching him in the way that I ached to touch him.

In the way that I had ached to touch him for decades — for as long as I could remember.

With me — but I could not fully be with him.

In me, but would not let me fully take him in.

And yet would not completely allow me to be part of him.

The violence of my orgasms, as he suckled — a seemingly endless, body-wracking, freight train of pleasure — was even more than I could possibly have imagined.

I see-sawed dizzily between the attempt to “remain present,” to drink down every drop of the pleasure he was feeding me — as he hungrily and relentlessly drank from my body — and a yawning abyss that seemed, simultaneously, both to beckon me and to warn me back.

I felt called to jump.

With a growl, he released my nipple, pulled back to gaze at my face, small trickles of my blood tracing down from the corners of his mouth to his chin.

His eyes were a fiery blood-red.

The color of passion.

The color of love.

The color of death.

And whatever he wanted — my passion, my love, my death — I wanted, with excruciating desperation, to give him, to offer to him, to surrender to him.

I would package my heart in silk and wrap it in velvet ribbons, give it to him on my knees, pray, with the fervent sincerity of an atheist, that he would accept and consume it.

If he wanted to consume my heart?

I would give it to him.

I would celebrate, I would revel in, the privilege; I suspected — I had little doubt at all — that would be the greatest orgasm of all.

How pallid, foolish, and lame.

What could possibly be more glorious?

Let us not play low-stakes games, I thought.

Such foolishness is for mere mortals.

His gaze was suddenly — chillingly — cold.

And, interrupting that cascade of pleasure, I felt a fast, icy, wash of fear — a bone-chilling, body-shuddering terror, that flashed through me like a full summer of sunburn in a single moment.

He growled — which was music to my ears — ducked his head down my body again.

I felt two quick nips at my sides.

The only way I knew them to be symmetrical wounds was the slow trickle of blood that I first felt and then, looking down, saw — there was no pain.

I have wanted; but I have never “asked.”

I have yearned for — but never really believed I would ever see, thought it impossible that I would ever experience — what happened next.

His tongue was like cinnamon-coated sandpaper: a long, hot, sinuous, endless snake.

He slid it so quickly, completely, and deeply into my ass that I thought he could have simply eaten my heart that way, coaxing, or simply pulling it, from my body.

And when he stabbed it into my pussy?

I felt like it was tickling and teasing and threatening my very soul — the one that, with no reservation, I believed not to exist.

I knew we were not in any normal place — or time — but still worried that my shrieks and spasms, my begging and pleading, my convulsions and my cries would . . . perhaps wake the dead.

He licked and assaulted my clit — teased it with his lips, with his shark-like teeth, with that lithe, rough, and stinging tongue — in ways I was not entirely sure I would survive.

Then his chin was in the valley between my breasts.

His blood-red eyes were holding my gaze.

And he was actually talking to me — a sound he had only ever before projected into my head; words, ideas, feelings, but no vibration — his voice a hoarse, grating, angry growl.

“I have not eaten it,” he said, the words themselves bitten off, “that gorgeous little morsel, that blood-swollen little incitement.”

I don’t know why: I sobbed.

For a quick moment, I wasn’t sure.

The word not just resounding in my head but rattling my entire body, with something I had to think was close to an epileptic fit.

“I will wait,” he continued. “I have waited before.” He ducked his head down for a moment, tongued a trickle of blood from one of my nipples. “I can wait again. I am. Patient.”

He might have paused there for something approaching a decade.

A time during which I found it impossible to breathe.

“And — ” I finally managed to choke out, my voice an odd sound to my own ears.

He closed his eyes for a moment and gave only a deep and resonant hum.

Then he opened his eyes again and — again — a kind of icy, liquid, horror subsumed and swallowed my entire body.

I tried — though I was not sure why — to make some kind of noise, and heard only the sound of myself gagging.

“What will you beg for?”

To say that he coaxed would make a mockery of that word.

I resisted the answer.

Each word a sledgehammer.

I didn’t mean to — I hadn’t expected myself to — talk.

Hearing my own words was the most horrific thing that had ever happened to me.

His voice now gentle: “No.”

“Yes?” his voice now velvet-smooth, sounding almost curious about what it was that I might be about to say.

My throat was closing; my heart was stuttering; I couldn’t breathe.

How different that phrase would have sounded — how different it had sounded — aimed at a previous boyfriend or lover, at . . . another human being, when the footnote that I meant what I’d said figuratively, not literally, would have been laughably unnecessary.

His smile was warm, his eyes were cold, as he leaned in and just flicked that sand-papery tongue over the two puncture wounds in my throat.

“You will,” he said, his voice having become somewhat dreamy and distant. “And then — ” I heard, I felt, something like a rumble of thunder; I saw something like flashes of lightning, “you will be totally and irredeemably — ” the thunder and lightning intensified, reaching a crescendo, “mine.”

The sounds and flashes became too much.

Jonzelig Follow
« Guiding You: For Him
Good Girls Behave »