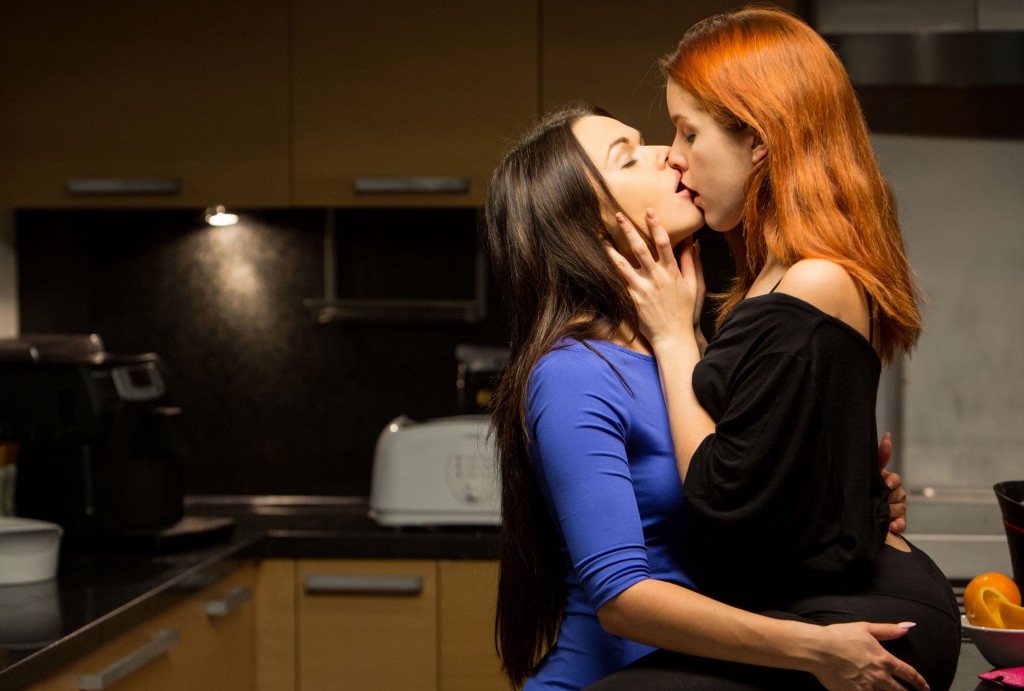 The thick, beautiful scent of apple pie filled the small kitchen as Jess opened the door, fetching the tin.

“That smells amazing,” Lilly said, resting her hand on her eight-month pregnant belly. “Thank you again for giving me a hand. I don’t think I could have done this bake sale stuff without you.”

“You’re welcome. I’m glad to be out of the house. I was going stir crazy.”

The two girls shared a giggle.

“I’m glad to have you. I can’t wait to have this baby; being pregnant is misery.” Lilly groped her belly, glowing.

“Do you think we have enough? Do you want to try one?” Jess asked, smiling.

“I think we made plenty. Hell, yes. I am eating for two after all,” Lilly said, chuckling.

Jessica pulled one of the pies off the stovetop and brought it to the table. She set it down and fetched plates and silverware, skilfully cut and served the pies. The two girls had been bonding over baking nearly all day.

“It looks incredible,” Lilly said, holding up a fork with a piece of pie on the end. “Cheers.”

Jessica smiled, returned the gesture, and they sunk their teeth. Jessica watched Lilly closely, hoping to win her approval. When she smiled, Jessica felt better. Ever since meeting Lilly, Jessica had wanted her support and friendship.

“I agree.” Lilly prepared to take another bite when some slipped off the fork and landed on her chest. “Crap,” she said. Some of the filling landed on her cleavage. At first, it was hot, but Lilly didn’t mind the heat. It reminded her of a time when she experimented with candle wax.

Jessica walked over and fetched some paper towels. She grabbed a handful and wiped the pie from Lilly’s chest, taking time to catch the crumbs and try to make the stain disappear. Thoughts were stirring in Lilly’s mind.

Jessica sat back down and ate her pie. She didn’t know what she’d just done and wasn’t aware that she’d just woken a beast inside.

“Can I talk to you about something?” Lilly asked.

“Something is going on with this pregnancy. My hormones are out of control, right?”

Lilly set down her plate and fork. She stared at Jessica, watching her eat, noting the puffiness of her full lips. Jessica had a nice polo shirt on, which exposed her mountainous tits. Lilly tried to keep eye contact, but she couldn’t help herself. It was hard not to look when they were poking out of her shirt.

There was a moment of pause, as Jessica contemplated what she might say in return.

“I haven’t let Brett touch me in weeks because we are still fighting.” Lilly made eye contact again, trying to gauge the situation.

“I’m sorry,” Jessica said. She didn’t know where the conversation was going, so she tried not to assume. “Sounds like he is missing out.”

“It’s crazy. I think about sex all the time. I’m going insane. The thing is, it’s not only about men.” Mercilessly, Lilly continued. She was gaining ground, and she didn’t feel as shy. “It’s even getting into my dreams.”

“For instance, one was about you. It was a wild dream, but I’ve got to tell you, I can’t stop thinking about it.”

It was Jessica’s turn to blush. “I don’t know what to say.” She shifted nervously.

“I was wondering if you have ever had a similar dream?” Lilly hoped this would be an opportunity to find out something about Jess. She was hoping there had been some experimenting during her younger years, something that could feed her imagination the next time she was alone in the bathtub, using the detachable showerhead.

Jessica thought long and hard about it, but she couldn’t think of a single example. She knew she had to have, but none were coming to mind. “I can’t recall,” she said.

“Have you ever, umm, kissed a girl before?” Lilly asked.

At this, Jessica couldn’t fight off a smile. “Well, no, but I have thought about it before.”

Lilly reached out, touching Jessica’s hair. “Is that something you want to try?” Her soft, fragrant hair smelled like green apple shampoo.

Jessica bit her lip, trying not to jump at the opportunity. She did want to try it but didn’t want to come off too eager. “I do,” she whispered.

Lilly had been with a girl once, long ago. They’d had a lot of fun together, and Lilly fantasized about that night a lot. She wanted to relive her lesbian encounter. Lilly took Jessica by the shoulder and leaned in, slow.

The fragrant scent of the vanilla body spray Jessica used and the smell of the pies blended. Jessica closed her eyes, waiting for the moment. Lilly puckered up, pressing her lips against Jessica’s, feeling the sweet kiss.

“How was that?” Lilly asked, pulling away.

There was a pause. Jess got up and began sliding the pies into the tins and placing them into the fridge. She was wrapping up intending to go home. It wasn’t awkward. They both gave each other polite smiles and spoke a couple more times before Jess left, taking one of the pies back, per request of her husband.

The following day was the bake sale. It was Lilly’s project, but she assured Jess they would play cards after and catch up on all the gossip. Jess was a homebody who enjoyed the chatter of the school.

When Lilly got home, she slapped the two pies that didn’t sell into the fridge and got out of her shoes. She loved being pregnant, but she didn’t like what it was doing to her body. Her back always seemed to hurt, and her feet always seemed to be swollen.

Brett was quick to go to bed, as he did most nights when he worked doubles. He worked hard. Overall, he was a good man, but she didn’t want to have sex with him, couldn’t. She temporarily hated him.

Lilly realized while she was setting up to play cards, she’d been thinking about Jess all day. That one kiss did more for her than her husband had in a long time. She couldn’t stop thinking about the way Jess looked, the smell of her hair.

The knock made her smile. When she called for Jess to come in, she thought she’d sang the words. Jess was wearing a skimpy little yellow dress. Immediately Lilly knew that it wasn’t going to end with them kissing. She knew that Jess had been thinking about it too.

Jess walked into the room, nearly floating. She looked more beautiful now than she had before, which seemed impossible. Lilly wanted to lick her skin.

“How’d everything go?” she asked, sitting down.

“It was easy. I sold almost all the pies. There were two left. I think Brett will make short work of those.” They both laughed.

“Jess,” Lilly said after another pause. She didn’t know how to conduct her following words. “I have to tell you something.”

“You can tell me anything,” Jess said, expecting a conversation about their kiss.

“It has to do with the hormones. I can’t stop thinking about you. Our kiss, it got to me. It got me riled right up. I would like to tell you that it isn’t
anything major, but I downplayed the dreams about you. I think about you, and all I want to do is light candles and sit in the bathtub.”

“I don’t know what we should do,” Jess added. “Kissing is one thing, Lilly, curiosity. Sex, on the other hand, that’s cheating on our husbands, and I don’t know about you, but I don’t think it’s a great…” Jess’s mouth snapped shut just in time to catch Lilly’s lips.

“We shouldn’t,” Jess said before kissing her again.

The kissing started soft and supple, but quickly grew into a passionate grope fest. Lilly had been dreaming about cupping Jess’s breasts for a long time. They felt even better than she expected.

At first, Jess seemed apprehensive about the hand on her boob, but she made no effort to move it away. After the kissing got hot and heavy, Jess returned the gesture, grabbing Lilly’s boob, which had swelled up from being pregnant.

“Your hands feel so good — squeeze,” she said.

While she fondled the breasts, she felt the bra go loose. Lilly took it upon herself to unclip it. Things were heating up. The kissing had escalated just like their wild heartbeats. Jess loved the feeling and pushed her tongue into Lilly’s mouth, groping, twisting, and sucking. In a moment of bravery and passion, Jess pulled the bra from under Lilly’s shirt and dropped it on the floor. Now they were free, and Jess could see the nipples cutting imprints in the shirt.

Jess groped at her nipples, squeezing and rolling them. It was clear the actions were giving Lilly immense pleasure. It didn’t take long before Jess began to wander to other regions. Her hand slid to the front of Lilly’s pants, skirting the baby bump. The buttons unfastened slowly, revealing a pair of yellow lace panties.

“Are you sure you want to do this?” Lilly asked.

Before exploring her pubic region, Jess played with Lilly’s nipples, lifting the shirt and taking them into her mouth. It was beautiful, feeling them roll on her tongue. They tasted great and pulling on them and playing with them was fun.

When the moment presented itself, Jess pulled the panties aside. Lilly laid back, eyes closed, enjoying the moment. Jess had never played with another vagina before. She rarely played with her own. At first, it was odd, but she adjusted and began having fun with it. Jess flicked it, rubbed it, and eventually sunk a finger inside the slit. It was wet and warm, like an apple pie.

“Your fingers are magic,” Lilly said. She was biting at her lip, staring down at Jess, who was approaching with her mouth. “Do it, please do it.”

Jess was apprehensive at first, but she dived. Lilly had a beautiful floral aroma, and Jess lapped at Lilly’s sweet vagina, playing in the juice. She loved the feeling and the taste. Jess immediately knew this wasn’t going to be the only time. Already, she was thinking of another way she could get into this situation.

“That’s so good,” Lilly moaned. She didn’t want to wake her husband.

When they stopped, they agreed they could never do it again.