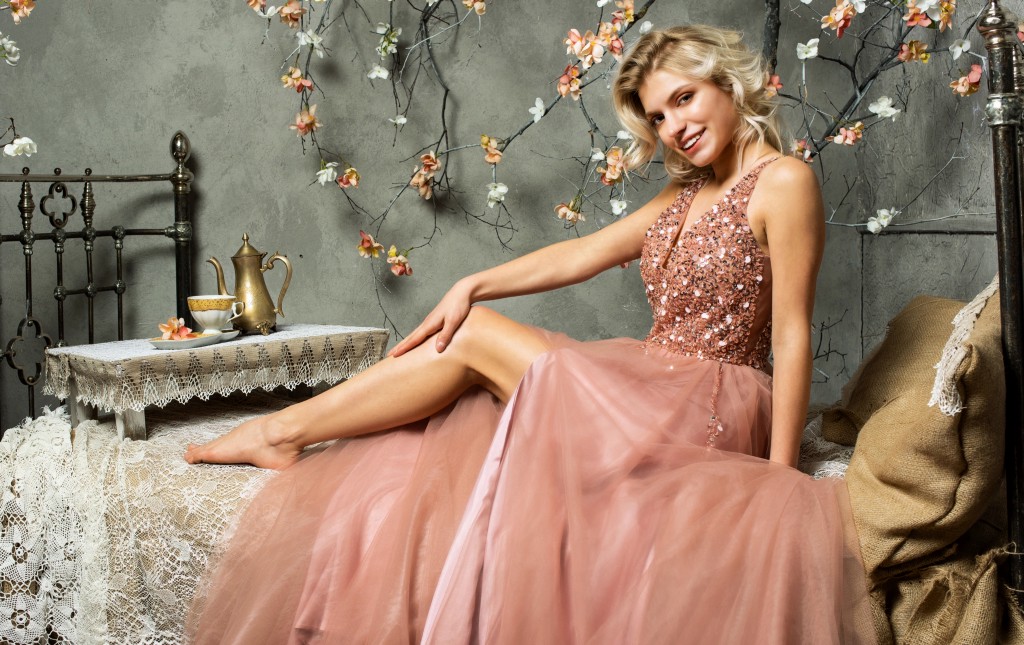 Her hands against the wall, the full length mirror reflecting her southern belle look in that new dress. Her Teddy behind her, holding her by the hips as he pumps his loving into her. She catches a glance of his hungry predator eyes that look at her full of desire. But she has to close hers to concentrate on her upcoming orgasm, and doggy is a quarante for an intense one.

Her imagination takes her to the panhandle. 1920’s, she is a cowgirl who spots this tall, dark, handsome stranger driving a Ford Model T down the gravel path by her farm. She is now riding him in cowgirl, her dress still on, as it would have been if she had taking him to her secret spot by the lake behind the farm.

His mouth is traveling through the rolling hills of her anatomy. He is discovering her territory, kiss by kiss. He is fascinated by the sweet innocent look that she projects. Her beautiful long hair rolling down her shoulders. It has been a few days since they last saw each other, and the anticipation that has been built is showing.

He starts his tour at her neck, slowly discovering every single spot on the path from her shoulders, across her collarbone and on the way to her breasts. He loves the way her breasts feel. Wobbly and soft yet perky, crowned by erect nipples. His kisses explore all around, but stop short of touching the tips.

She moans with desire as she feels how he moves to the other breast without having touched her nipples. The teasing is driving her wild. She closes her eyes and is back in the panhandle. She has invited him for dinner at her place, knowing that her dad would love to see the car he is driving. She is sitting at the table opposite him, and while following the conversation she keeps catching this look he’s throwing her way. It is a dance of courtship, heaping up expectations for what is yet to come.

She sent him pictures from the dressing room where she was trying the dress on. She knew then he would make her wear that dress for him. She said she’s channeling Dolores from the show Westworld, and she indeed looks the part. His wild instincts took over as she first put the dress on in front of him. As she stood in front of the mirror he approached her from behind, pulled up the skirt, his hands caressed the roundness of her hips as his hardness found its way into her.

She loved when he penetrated her like that, with a stiff but still growing erection, just to have it become harder and bigger with each thrust inside of her. Their dance had started and she was holding with both hands to the wall as he was pumping her from behind. He held her across her chest, while his other hand found its way into her mouth.

She knew what he had in mind and she wet his fingers with saliva. Her moaning intensified as he moved his wet fingers to caress her clit in their dance of pleasure. The touch of the soft fabric of her dress on her skin added sensations to the pool of pleasure that was about to overflow. She tensed her back as her orgasm struck. He was holding her firmly in his arms. She knew she could let herself go, and with a strong moan she fell into the magic they had built from their desire for each other.

I want you to ride me in cowgirl…

He wished. She gladly obeyed and mounted him, the dress covering them, his hands holding her head as he looked deep in her eyes. As she closed her eyes she was transported again to the panhandle. It was night and she had been throwing little stones at his window to call him out. They had walked to her secret spot by the lake, with the full moon showing them the way.

They were lying in the grass as he was telling her about the wonders that technology would do. His hand on her breast was turning her on, and the spirit of the nights adventure took a beautiful turn when in one moment he turned around to kiss her.

She was now moving up and down his shaft. She would stop with his tip barely at her entrance as she played with her tongue on his lips. She loved the way his mouth felt, their kissing was like an anchor point in their lovemaking. She would then push him all the way inside of her, and their dance would start again.

It is always that circular motion, when he’s deep inside of her, that does for her. As if she is trying to unlock a secret code, the rubbing will always get her. And boy did it get her this time! The anticipation they had built all these days had worked its magic. The contractions on his pulsating manhood drove him over the edge and the both collapsed and melted into each other.

And the southern belle dress, like a silent witness, lay in the grass, under the starry sky shining upon the lake.