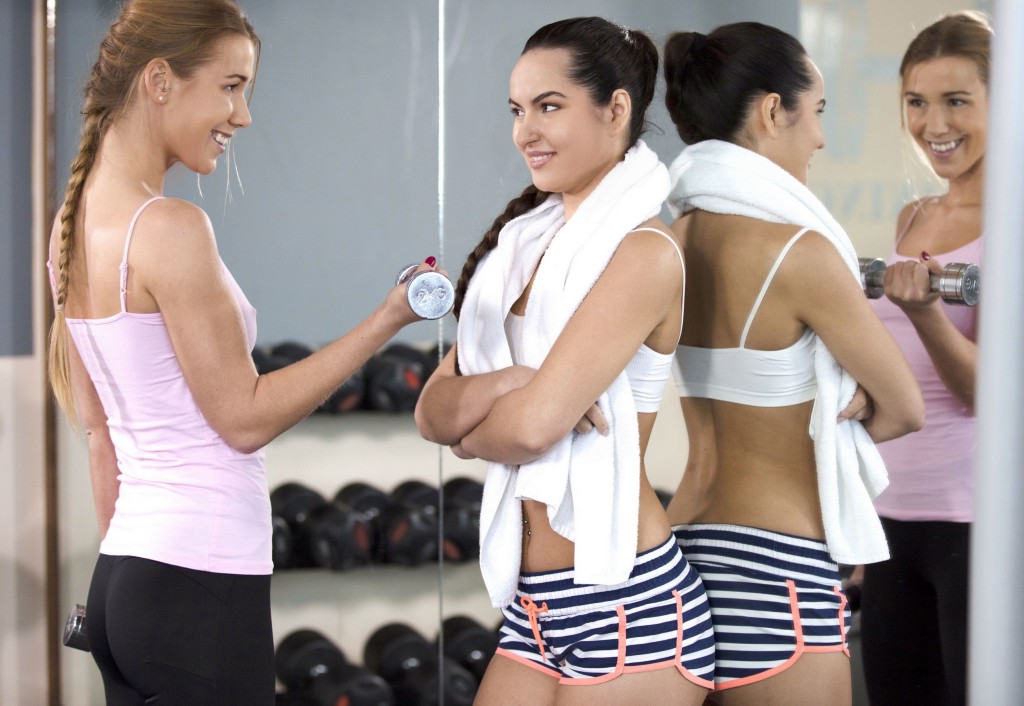 Alyx is finally alone with Lexie at the gym. Things get steamy in the locker room.

Alyx pulled up at the deserted gym. Early morning offered the best chance of running into Lexie, her old acquaintance from school. Although they weren’t the closest of friends back then, they got along just fine.

Lexie had left their small rural town after college, returning recently a whole different person. A successful businesswoman and openly bisexual. She was a breath of fresh air compared to Alyx’s group of friends.

The cool air felt good as Alyx entered the air-conditioned room. Lexie was the only one there, her heart-shaped ass bouncing as she powered through her workout on the treadmill. Alyx admired it as she walked through to the locker room.

Alyx returned her greeting, hoping she hadn’t just been caught ogling Lexie’s ass. Sure to keep her eyes on the ground, she rushed to the lockers.

The changing room was a comfortable place. The modern design was clearly built with privacy in mind. Tossing her bag down she pulled out her workout clothes, and began undressing. It had been a long road for Alyx. Four years of grueling workouts and martial arts had seen her tone her body to where she was finally happy. Her asshole ex and the barmaid, long forgotten.

She watched herself in the mirror as she changed, proud of her progress but still overly critical of her looks. She imagined what Lexie would look like naked, as she pulled on her shorts and a sports shirt. She turned, checking out her spandex covered ass. She enjoyed the feel of the material as she ran her hand over her cheeks, cupping them and giving them a jiggle. One day I’ll get an ass like hers, she thought, feeling her dampness growing at the thought of Lexie.

She glanced over her shoulder, guessing Lexie had at least another half hour before finishing her workout. The ache in her pussy was too much to ignore as she slipped her hand into her shorts. She was surprised at how wet she was.

Alyx closed her eyes, picturing Lexie and her powerful thighs wrapped around her head as she devoured the brunette’s pussy. She grabbed her own tits through her top, imagining how the weight of Lexie’s larger boobs would feel compared to her own. Her fingers slipped inside her slick folds, thrusting as the pressure built up deep inside. She tasted her wet fingers and wished it was Lexie’s juices covering her tongue.

“Well, you don’t see that every day!”

What the fuck, Alyx thought, flustered. Trying to pretend she was doing something else.

Alyx, burning with embarrassment, straightened her clothes and went to leave. She stopped short as Lexie blocked her way.

“I didn’t mean to interrupt,” Lexie said, reaching for her wet hand. “I feel bad you didn’t get to finish.”

Alyx, still not comprehending what was happening, stood dumbfounded as Lexie took her hand. She let her bring it up to her nose and smell her glazed fingers.

“At least let me help you finish,” Lexie winked, “you smell great.”

“I should probably get to it,” Alyx said, wishing she could just curl up and disappear.

“Hey, nothing to be ashamed about. I was enjoying the show.”

Alyx turned a deeper shade of red, unable to look Lexie in the eye.

“Let me help you,” Lexie whispered, emphasizing the words with a kiss on Alyx’s wet fingers.

Scared that even a word would shatter her fantasy, Alyx nodded her consent.

Lexie stepped around her, fingers tracing along Alyx’s waist as she led her to the shower’s changing cubicle. She held the door open, gesturing her inside.
Alyx watched as she locked the door behind them. No longer needing to steal glances, she made note of every inch of her. “Your body is amazing.”

“Please, I would kill for yours,” Lexie said, pushing the changing benches together and covering them with a towel.

Alyx pounced, needing to feel Lexie’s tits against her own, months of pent up frustration and fantasies washing away as their bodies crashed together. Lexie wasted no time working her fingers through Alyx’s blonde hair, finding the nape of her neck and pulling their lips together with abandon.

Alyx took off her shirt and bra between kisses, giving Lexie better access to her tits. Alyx moaned as the hot mouth wrapped around each in turn, tongue dancing over her sensitive nipples.

Lexie hooked a thumb in Alyx’s shorts, making sure to get her panties too as she pulled them down. She followed their path with her lips.

“I’ve wanted this for so long,” Alyx panted.

“You’re not the only one,” Lexie said, guiding her to lie down on the bench and planting more kisses around her pussy, teasing her inner thighs.

Alyx sighed as she wound her fingers through Lexie’s hair, impressed with the mouth on her pussy. Her orgasm was quickly approaching. She certainly knows her way around a woman, Alyx thought. Pulling Lexie harder into her, she begged Lexie to slow down, “I’m gonna come!”

The extra pressure sent her over the edge. Her pussy gripped down hard on her friend’s expert fingers. Her orgasm crashed over her. Lexie licked up the juices running down her friend’s slit, extending her pleasure as long as she could.

Panting, Alyx propped herself up on her elbows. “That was probably the best I’ve ever had,” she gushed, watching her friend savor her juices.

“Please, that was nothing,” Lexie winked, “just a warm-up.”

Alyx grabbed the brunette and pulled her close, eager to taste herself on her friend’s lips.

“How about you sit that sexy pussy on my face?” Alyx said, breaking their kiss. She ran a hand over Lexie’s firm stomach, her pussy just out of reach.

“I can shower first if you prefer?” Lexie offered. “It was a hard workout.”

“Shh, come here,” Alyx said. She was desperate to bring Lexie the same pleasure she had just received.

“You asked for it,” Lexie teased, as she positioned herself over Alyx’s face, her long legs either side of her head. Bending at the waist, she enjoyed the look of lust on Alyx’s face as she kissed the athletic body below her, keeping her own pussy hovering just out of reach.

Unable to take it any longer, Alyx reached up and pulled Lexie down onto her face. She was instantly rewarded with her sweet and sweaty essence. With Lexie’s hot juices running down her tongue she probed the swollen entrance. She was determined to give her an amazing orgasm in return as her second built quickly.

Lexie sat up on Alyx’s face and moaned. Knowing how sweaty her ass was from her workout, the extra sensation against her puckered hole was driving her insane. She ground down harder, rocking back and forth as she coated her friend’s face with her juices. Her orgasm was fast approaching.

Lexie was close. She shoved Alyx’s fingers into her pussy as she let her weight fall on the invading fingers beneath her. She felt Alyx’s hand pushing up, meeting her thrusts, stretching her as her tongue gingerly teased her rosebud. Lexie couldn’t take it any longer and cried out, her pussy pulsing as she came hard. Her juices ran down Alyx hand into her waiting mouth.

Lexie sighed and collapsed on top of Alyx, unable to hold up her weight in post-orgasmic bliss.

Alyx laughed, struggling to breathe, “OK, that was amazing! But you don’t have to kill me.”

“Sorry,” Lexie giggled, “it’s your fault.” She slid off onto shaking legs.

“Well, I think I’d better take a shower before I get started,” Alyx smiled, her face glistening.

“I think you look quite divine.”

“I don’t think my clients would approve.”

“Never know, you may get some tips,” Lexie winked, pulling on her clothes.

Alyx laughed, spinning the lever for the hot water.

“Well I’m gonna head home, and replay this whole thing in my mind,” Lexie said, as she watched Alyx step into the shower. “Same time tomorrow?”

Alyx agreed, smiling. She was curious to see where this new chapter would lead, as the warm water washed over her body.