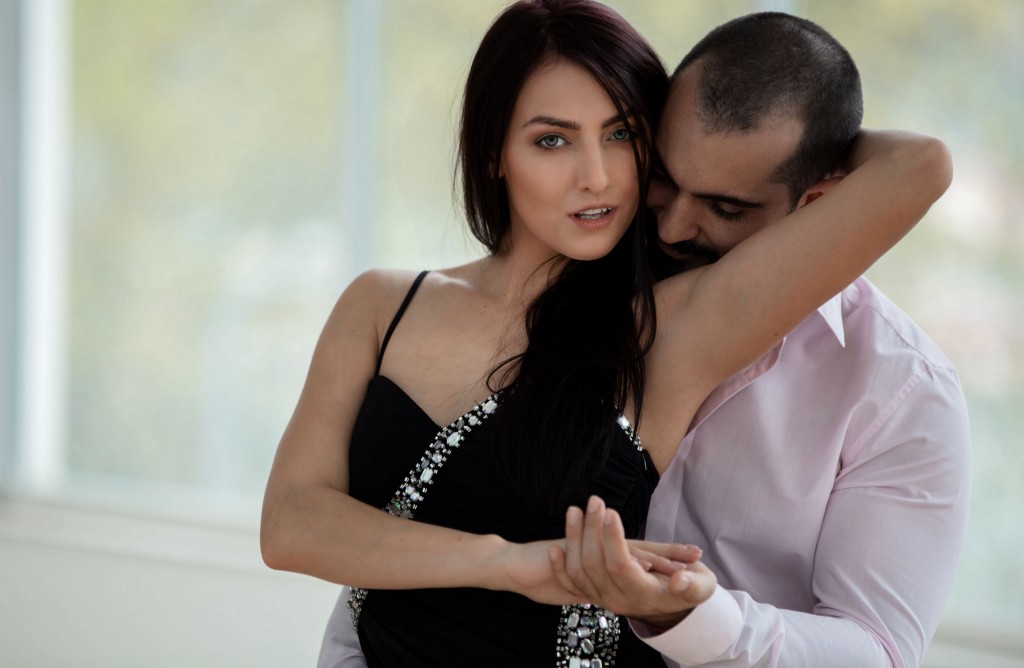 There was nothing Carla enjoyed more than dancing with Juan. Well, almost nothing. As the song was finishing, bringing that evening’s practice to a close, she could feel his length against her hip for what seemed like the third or fourth time this evening. Her eyes flashed and she curled her lips into a wicked grin.

“Are you focusing, my love?” She spoke at the low end of her range.

She moaned into his full mouth. Her tongue darted in between his lips. When she felt his hands on her voluptuous ass, she knew he wasn’t playing.

He broke the kiss long enough to pant, “I love you so much. I want you.” They were in their studio and the doors were locked. Their last student had left an hour ago.

She pushed him back and back, his shoes clicking on the wood floor.

His coordination didn’t waver, even in his lustful state. He turned the movements into a dance. Finally, she backed him into a chair, where he sat dark eyes flashing.

She reached behind, unzipping her long, black dress, allowing her breasts to spill free. “Are you going to unzip or shall I do it for you?”

Without answering, he unbuckled the thick leather belt and unsnapped his pants. “I am ready for you, my love.”

Her dress pooled around her high heels, she pushed her panties down and stepped out of both. Naked except for her dancing shoes, she stepped to him and ran long fingernails down his cheek. “You’re as handsome as the day we met.”

He unzipped his pants and pulled his length free. “And you’re as beautiful.” They’d been dance partners for fifteen years and lovers for ten.

She straddled the chair and lowered herself, enveloping his thick flesh. That he was still clothed thrilled her. She rode up and down, luxuriating in the feel of his silk shirt against her breasts and his pants under her thighs. She wanted him to fill her as she came around him.

In response, he rose up to meet her and the pounding of their flesh formed its own rhythmic music. Her cries were the guitar come to life and his grunts the bass line. He slapped her firm ass in time.

She reached down between her legs and rubbed her clit as he buried his face between her breasts, licking and sucking the salt of her skin.

He stood and held his hands under her, still inside her. He put her back against the wall and drove into her harder and faster.

She clawed at his shoulders, nearly shredding his shirt with her wicked nails. Her orgasm came on her and she covered his face with kisses as she clutched his length in her dripping core. Together they grunted and sang as he shot into her.

Together they slid down to the wooden floor, Juan turning to cushion her body with his. “Te amo.”

Sweating and spent, they relaxed in their dim studio until the sweat on their bodies cooled and forced her to dress so they could go home and shower, only to start their dance again.