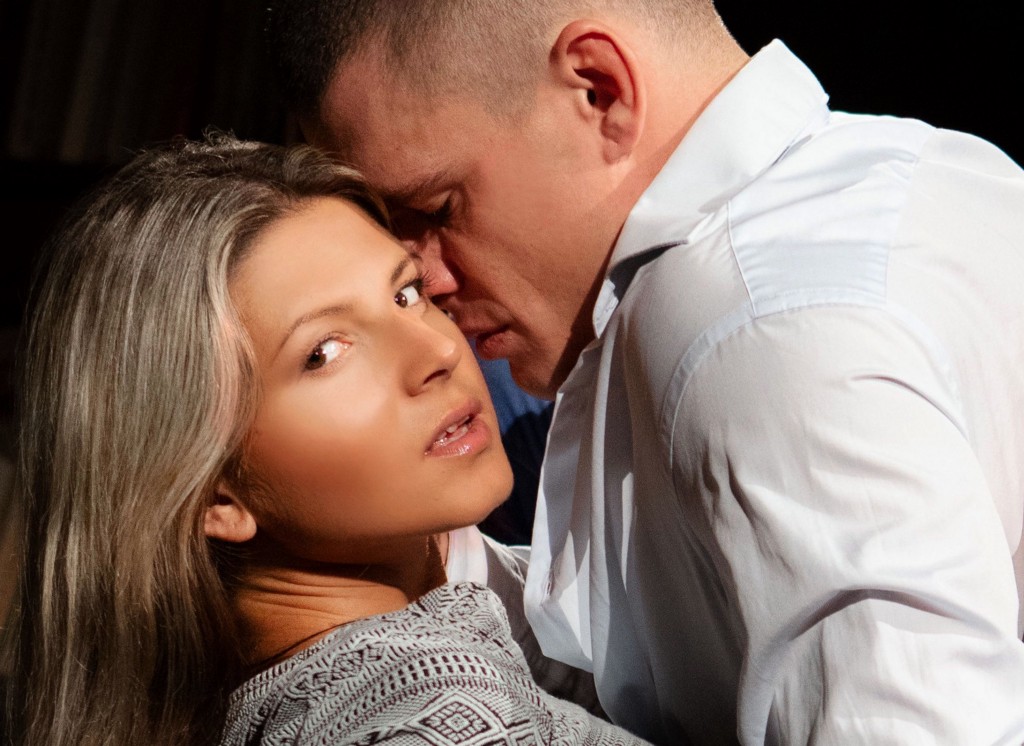 I wonder what it would be like, Danny thought deeply as he watched the new stock girl bending over to place cans of beans on a shelf. It was only her second day, and she didn’t know everybody, yet. Danny had been asked to keep his eye on Becca, and that’s exactly what he had been doing. He had been ogling her in those yoga pants since she clocked in.

Becca was a cute blonde with a messy ponytail and a pair of blue glasses. It was her first time working at a grocery store, so she didn’t know the drill, but she was catching on quick. She had a cute face with a sharp nose. Her body was unbelievable. Whenever Becca would bend over, he could see the Y shape of her thong through the unforgiving yoga pants.

Damn, I love this job sometimes, Danny thought, remembering some of the other girls he’d fucked. There had been a couple of customers, too, who had been looking for help and slipped him their number after he tracked down the right brand of coffee or whatever.

From her position on her knees, she looked at him over her glasses. Danny had a vision of what it would be like if she were on her knees in front of him, and he liked what he saw. His wild imagination even went a step further, allowing himself to see his cock in her mouth.

Danny had to move away because he was afraid of going further into the fantasy. If he had stayed, he would have gotten hard right there in front of her. It would have been an awkward second day of work. Her amazing body and tight, sculpted ass made it hard not to stare.

The floors were cleaned, and the aisles stocked. Danny walked to the front of the store to check on the cash registers. Two registers were open with minimal lines, not enough for him to jump on. The store hadn’t been busy because a thunderstorm was brewing. Earlier in the day, Danny heard the thunder crack a couple of times, and Tammy told him the rain had come in about twenty minutes ago.

Tammy was another one he had slept with, once. The sex was wild. They had both been drunk. She was clean shaved under those jeans, no panties either. Just the way Danny liked it.

Becca was still in the aisle tending to the pallet in the center of the floor when he returned. Danny didn’t feel like standing by while she did all the work. It wasn’t like him. Instead, he began down stacking the pallet and stocking the shelves beside her.

“Tell me about yourself,” Becca said.

“This isn’t it for me. I box on the side, with hopes of going professional someday.”

“I guess that explains why you’re sculpted like a Greek God,” she mumbled. At first it came out a little sheepish, but also slightly flirty.

It felt like his heart skipped a beat because it certainly seemed like she was hitting on him. The words rolled through his mind several times. Is she making a pass at me?

“Are you single?” Danny asked. There was hesitation in his voice because he was wary of overstepping his boundaries.

Becca stopped working for a second, looked at him with a lifted brow. “I am.”

A smile turned up on Danny’s face. The way she was now undressing him with her eyes was a sure sign she was interested in him. She was looking at his biceps like he had been looking at her in those almost transparent yoga pants.

Outside the supermarket, thunder clapped, and lightning ripped across the sky.

“My last boyfriend couldn’t handle me,” she said. She bent down, making unwavering eye contact. While she bent over the pallet, she pulled at the front of her shirt, allowing his eyes to trail down to her chest for a brief second. “It’s hot in here,” she said, unsnapping the top button of the blue uniform shirt. Her cleavage was smooth and creamy. Danny wanted to see more and had to keep himself from drooling.

Another crack of thunder and a bolt of lightning, then the inside of the supermarket went completely dark.

As they trailed toward the back hall, Danny extended a hand in the barely lit soup aisle, finding her ass and grabbing it. The cameras were off, and they were free to do whatever. When they got into the hall behind the milk fridge, Becca turned and grabbed Danny’s crotch. She felt the bulge in his pants.

“We don’t have much time,” Danny said.

There was a slam as Danny pushed her against the wall. The inside of her mouth was nice. Danny felt around with his tongue, playing leisurely with hers. Becca was slim, not weighing much. In the dark, Danny groped at her, feeling her ass and tits. He reached down, swiping a hand at the front of her yoga pants. With the tip of his finger, Danny caught a feeling of her mound. The single digit had slid right between the lips. Even through two layers, Danny would have sworn he touched a puddle.

Again, Danny groped at her. During their heavy kissing, he lifted her into the air, which made her legs weak. When she returned to the floor, she had pulled down her pants and thong.

“Take me,” she said, breathing heavily.

Through the pitch black darkness, Danny groped around, finding her mound again. Between her lips was already wet and sticky. Although they couldn’t see, Becca heard when Danny’s zipper went down. He was hard as steel.

The only light in the back hall came from an orange exit sign. Neither Danny nor Becca could see what they were doing, but it felt amazing. Danny had her pinned against the wall, pants around her ankles. He had already penetrated her deeply and was slamming his body into hers.

Becca had to bite her lips to keep from screaming; from past experiences she knew she could be loud. They would have heard her in the front of the store. At one point, teetering on the verge of an orgasm, Becca clasped a hand over her mouth.

“Don’t stop,” she pleaded, forcing her voice out of her closed throat. “Oh my god,” she cried as the orgasm ripped through her body. Her legs began to shake and wobble.

Danny bent down, planning on grabbing his pants, but she reached out and grabbed his arm, stopping him. Becca had gotten off, but Danny hadn’t. It wasn’t fair. Under ordinary circumstances, Becca was a generous lover.

Becca grabbed his cock in the darkness. She pulled up her pants before dropping down onto her knees. Danny’s cock was dripping with a combination of his pre-cum and her cream. When she was positioned on the floor, staring up at him in the red light, she slid his cock in her mouth, tasting their mixed juices.

Her warm, tight cunt had been great, but Danny hadn’t been prepared for her oral skills. Becca had the perfect combination of suction and hand work. She stroked as she slurped, pulling at his cock with every motion of her head.

From the softness of her hair under his hand, to the smooth wet feeling of her lips, Danny was hypnotized. If it were up to him, they’d be doing this again. With a hand behind her head, Danny guided her up and down, back and forth. Becca was more than willing to participate. Danny leaned back, head rolling on his neck in pure, raw ecstasy.

A twitch occurred in Danny’s leg, signaling it was about to happen. Do I warn her? Danny wondered. With a quick grunt, Danny came.

Becca didn’t remove her head. Instead, she stayed and swallowed.

The lights began to flicker on. In a hurry, Danny and Becca clothed themselves, hoping not to get caught. When the lights came back on completely, Danny was looking at Becca, who raised from her knees. Danny motioned there was a little dribble on her chin, which Becca traced with a finger and sucked off.

“We’d better get back to work,” she said seductively, leaving him with a wink.