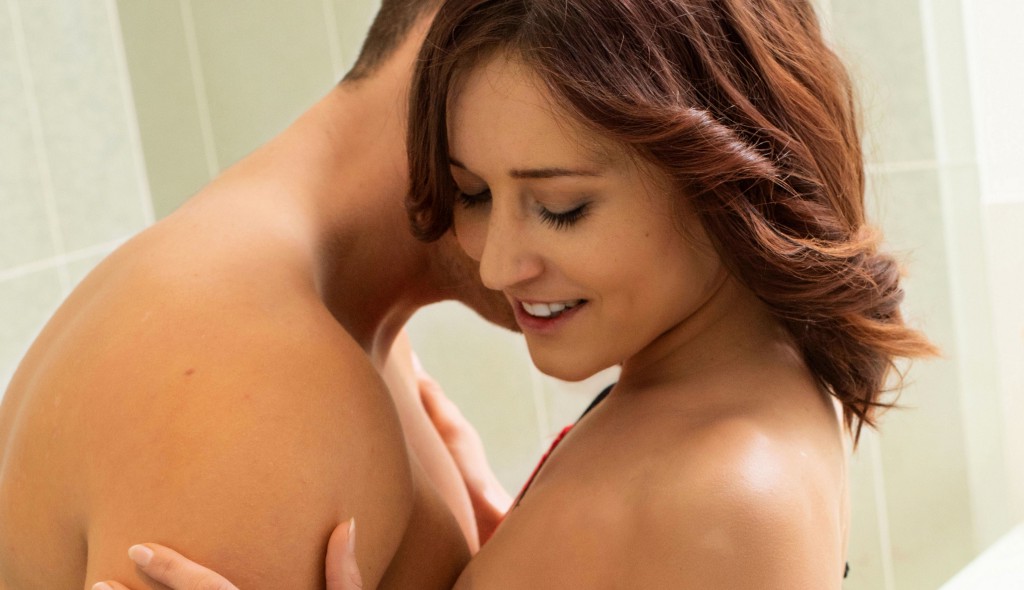 But last week she was swiping through the news app on her phone when she saw him: Harry Spencer, adorning the cover of GQ. Ten years ago, no one would have believed it. Sure, it was predictable that he would be featured in Scientific American or the MIT Technology Review. But seeing him looking like a million bucks on the fashion and culture magazine had brought back the memory of something that only Claudia knew: inside the geeky boy was a dormant stud with an amazing cock. The biggest secret she ever kept from her friends involved Harry Spencer, a lost pair of panties, and the boy’s locker room.

A week before the end of Senior year, Claudia had showered after gym class and was trying to get dressed when she realized her panties were missing. She panicked. It was a daring prank to steal people’s undies and do something embarrassing like fly them on a flagpole or nail them to a classroom wall. She looked around frantically but had to put on her uniform commando. When her friends left the locker room, she stayed behind to search more. Then Claudia decided to try the boys’ locker room. It was a desperate move, but the class was about to start, so it should be empty. She sneaked in, looking everywhere quickly, then heard running water and froze. Leaving would have been the right thing to do, but she was an eighteen-year-old, and her hormones got the best of her.

Moving slowly, she peeked inside the shower, and her eyes met the dark gaze of Harry Spencer, his slim body naked and wet. Her eye caught a hint of movement, and she watched entranced as his half hardened dick grew into a long, thick, rock hard pole. She gasped audibly, glued to the spot. Slowly, gauging her reaction, he rubbed the tip with his fingers. Her mouth made an “O” shape, and her tongue caressed her upper lip.

Harry wrapped his cock with his hand and stroked it slowly at first, sliding the palm from base to tip and back. Then he held it up to reach with the other hand and grab his balls. Claudia gave a shaky exhale, and her hand slid in between her thighs, finding her soaked core.

“Fuck yeah,” she heard him say as he picked up the pace, stroking with abandon. Her hand rubbed her clit vigorously. She moaned loudly, lifting her skirt to give him a show. The view made Harry’s cock tense even more, and she watched fascinated as the magnificent member pulsed, spilling thick white strings that covered his belly and chest. Claudia came, her core convulsing in waves of pleasure that almost made her lose her balance. As soon as rational thought came back, she ran away; and avoided Harry for the rest of the term.

Over the years, Claudia thought about that day many times, understanding more and more what had happened until it became her favorite sexual fantasy. Every time she wanted an orgasm on the run, imagining what it would feel like to get fucked against the locker room wall, that thick cock stretching her pussy, did the trick beautifully. Then she saw the magazine cover with the picture of a very put together Harry Spencer and the title “The New Silicone Valley and the Bachelors That Rule it.” With that, her decision to attend the reunion was made.

Claudia put her empty glass on the bar, and when the flirty bartender offered another, she declined.

“Pity,” a low voice said behind her. “I was hoping you would have at least one drink with me.” Harry Spencer, wearing a perfectly fitted suit and horn-rimmed glasses, gave her a mischievous smile. “Hello, Collins. Remember me?”

“I remember you, Spencer,” then she boldly looked at the bulk in his pants. “I remember every part of you.”

“You ran away from me that day in the locker room.”

“We all have done things we regret.”

“So, you regret not staying with me in the shower?”

She smirked. “I didn’t know what else to do back then.”

He leaned to speak in her ear. “What about now? Do you know what to do?” His erection brushed her thigh.

She whispered back, “Nowadays, I do know what to do when a hot guy points his hard cock at me, if that is what you are asking.”

“I bribed the janitor to borrow the key to the locker rooms. Interested?”

“Depends. What are you planning on doing there?”

He chuckled. “Remember how that day you lifted your skirt and showed me your glorious pussy? For ten years I’ve been trying to imagine what it tastes like.”

She grinned. “I guess you are about to find out.”

As soon as they were inside with the door locked, he commanded, “Take off your panties.”

“What panties?” she asked with a smirk.

“Fuck. Are you naked under that dress?”

“I thought I might run into you,” Claudia said, undoing her zipper and letting the dress slide to the floor, leaving her in her thigh-high stockings and pumps. “I wanted to return the favor.”

“So thoughtful. Then climb on the massage table behind you,” Harry said, while working on taking off all of his clothes. She obeyed and sat on the table. “Show me the pussy I dream of,” he demanded.

Claudia lifted her feet, so her heels were on the table, legs completely spread. He dived in and ate her with gusto, savoring every fold and suckling the hard, delicious nub. The smacking sounds gave her whole body chills. Harry slid two fingers in and out the warm, soaked channel. With every stroke, his pinky finger would tease her asshole. The pleasure was almost too much. She came hard, squeezing around his fingers and crying for more. Harry happily obliged.

“Ready?” he asked with malice in his voice as the head of his dick poked the dripping entrance.

“Stop teasing and fuck me with that thick cock. Ten years is enough waiting!”

“Feisty little thing, aren’t you?” he said and rammed his dick inside her, following with a relentless pounding that made her scream in delight. “Where do you want it, babe?” he asked when his balls started to tense up.

“Fuck yeah,” Harry grunted, covering her with his release, then sliding back inside. Her walls clenched around him, reveling in their shared ecstasy.

“This is not over, you know?” Harry said, leaning next to Claudia on the massage table.

“I hope not,” she purred, pulling him in for a kiss.