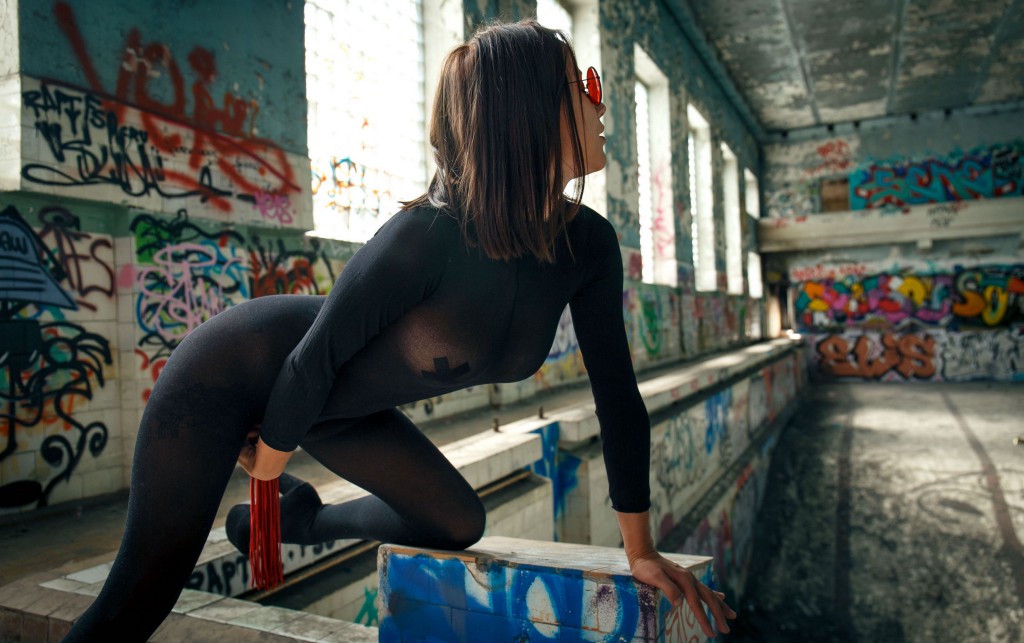 The abandoned schoolyard is a perfect spot for letting out some mental steam. Paula’s loose shirt and baggy jeans conceal a darker fantasy swirling inside her devious mind.

She demands respect. She longs for control. She wants to be desired by a gang of women.

At some point, our social structures will collapse. In 15 years? 10? Next week? Paula closes her eyes to the future.

This generalissimo of the streets wears round glasses like Lennon but with an orange tint to watch the world burn. She’s got no bra underneath her sheer bodysuit. Four pieces of black electric tape crisscross over her nipples to avoid chafing. Her black suede boots with high heels are an extension of her apocalyptic uniform. The finishing touch is her exposed crotch. Her pussy already bulges with anticipation.

Paula rides with a dedicated group of women that dress like a discordant bunch of cheerleaders from the year 2050. They’ve ditched their pom-poms for leather flogs. Their boots have razor-sharp spurs. Their standard-issue black and silver uniforms were salvaged from a busted-up delivery truck that was on its way to restock a lowbrow lingerie shop. The nylon fabric comes with rips and a variety of discolorations. The uniforms have a permanent smell like fire.

There is some choice involved in wardrobes. The women can choose between boy shorts and a bra or a bodysuit with a thong. Many of those with thongs wear the mark of the gang on their ass: a fiery rose. When it gets cold out, Paula hands out pairs of thick black socks that go up over their knees with white stripes at the top.

Gangs like Paula’s emerged as a natural counter to the growing infestation of incels. Paula’s gang is known for its cruelty. Showing off their tits and ass is like rock salt in the wound of their undersexed rivals. The women say they wear this shit for comfort, but with a smirk.

Touch them and be prepared to lose an appendage. Unless you’re part of the gang.

After returning from burning down a gun shop that sold weapons to some psychos who attacked them, the girls need a release. Everyone knows why Paula is calling a special meeting — they bring soft blankets and pillows.

The women gather around Paula, who speaks atop a diving block overlooking a pool full of nothing more than old newspapers and raccoon piss. The indoor public pool is a reminder of the failure of the leadership structure, which is to say a failure of men.

Everyone gets a drink in a recycled soda can. The room temperature glass of vodka goes perfect with a splash of rosé. They raise their aluminum to Paula. She is a good leader. She knows she needs to keep the toast short and to the point.

“Ok, my dear sluts,” she says, raising up her orange Crush. “Are you ready for some pussy?”

They cheer and drink and fuck.

Paula takes a seat. She says she wants to make sure the rowdy crowd behaves. But she won’t deny that she likes to watch her Pussy Posse.

The women gather in smaller groups at first with gentle touches and soft kisses. The groups inevitably combine into larger groups — entropy has no place here. They make love with anonymous fingers, nipples, toes, and tongues in assholes. Some of the women grab strap-ons hanging from towel racks alongside the pool. Faux dick is quite popular.

Squirtin’ Jane, as she calls herself, walks through the gang-bang looking for anyone who wants to be blessed with the help of her magic wand. A woman curls up from the masses with her mouth open to taste Jane’s holy waters. Paula can’t hear Jane’s splashing orgasm over the chorus of moans.

It’s sex in the aggregate.

The women know when Paula wants to get involved. Rubbing her wet pussy and licking off the taste is a sure sign for the posse to come to her aid.

Paula knows her girls well. Even when she is surrounded and smothered she knows each person connected to her.

Genie rips Paula’s bodysuit down over her breasts, which have a tan line the shape of a bikini top — that’s what Paula wears for her top when she goes on Harley runs. Genie starts to kiss Paula on the neck and under her ear, sucking Paula’s mace earring like a lollipop.

Cassie is sucking her tit hard and has three fingers over her clit. Tonya has two fingers inside her pussy and one in her ass.

Emma keeps flogging Paula’s nipple with her pom-poms but Paula wants it sucked. She rips it away, taking the pom-pom by the handle with her teeth. She pulls Emma into her bosom.

“You better leave a mark,” she says.

Paula opens her legs to let Cassie and Tonya fight to get a tongue in her pussy. They come to a truce in their tongue war, sharing her labia like good girls.

Kate and Liz arrive with an offering. They hold up Ena — one hand each on her ass and one under her knee — with her legs outstretched. Kate and Liz guide Ena’s pussy within the reach of Paula’s tongue. Ena is desperate to come. Paula clamps her mouth over Ena’s clit and presses her tongue downwards and back up. She suctions and sucks on Ena’s sensitive ball of skin between her teeth.

Paula holds Ena in her mouth until the pulsations in her pussy subside. She crawls to an open spot on the cold, tile floor and cuddles with a stranger. Her eyes feel heavy as she drifts asleep to adoring whispers.

“We’re waiting for you, Paula,” says a woman lying next to her.

The woman looks like a co-worker, Paula thinks. She sits up and claps her hands in Paula’s face.

Paula opens her eyes. The sky is bright. Paula checks her watch. She’s already 15 minutes late from her lunch break. She heads back to work slowly.