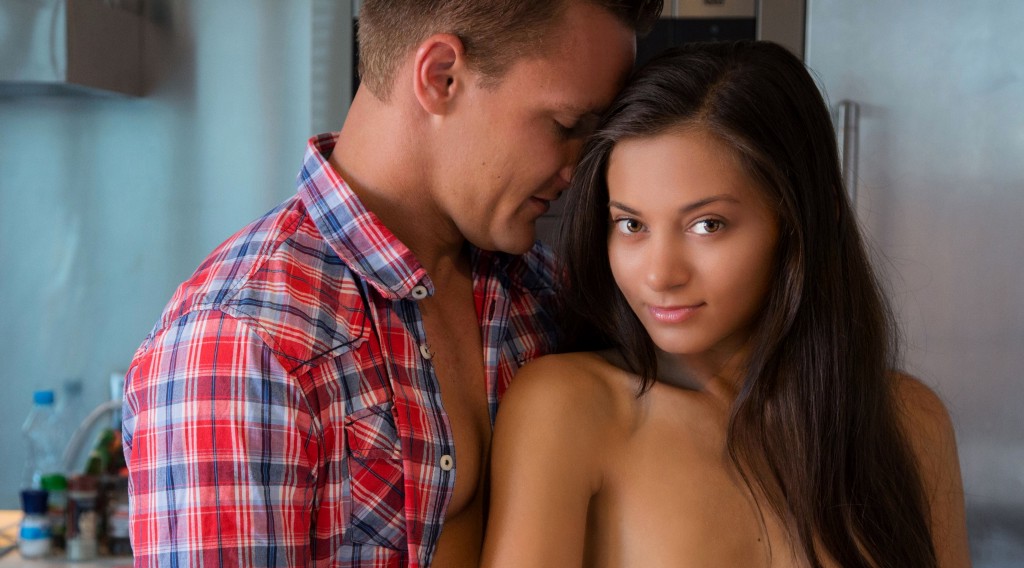 I pulled up to the house, exhausted. It was the Sunday of the big game, and I was returning from the ridiculously busy grocery store. It was “my job” to buy all the snacks and food for my husband and his friends. I even made a trip to the liquor store, purchasing two 30 packs of beer for them.

I entered the house carrying bags of groceries, trying to balance everything. I’d left the house in sweats, my hair in a ponytail, no make up, with glasses because I didn’t have time to put in my contacts. When I walked through the front door, my husband was sitting there in his recliner watching TV.

“Oh, I can’t, I have to get my bets in for the game,” he said, pointing to his laptop. The laptop could barely stay balanced on top of his fat gut while he stuffed his face with potato chips.

Sweating from carrying and putting all of the groceries away, I sat down in the living room, looking at my lazy husband in disgust.

“Are you going to take a shower and put on some makeup?” he asked me. “I don’t want the guys at work to think that my wife is sloppy.”

“Are you fucking serious?” I asked him. “Yes, I’m going to take a fucking shower. Do you plan on doing anything today but sit on your fat ass?”

I rolled my eyes and went upstairs to get ready for the party. I thought about what my husband said, and it pissed me off. Who the hell was he to judge how I looked or how I dressed? That’s when I decided that I was going to drive his friends wild. Not only was I going to look good, but I was also going to look fucking hot.

After my shower, with my robe draped around my naked, dripping body, I looked into my closet. I assessed my options. I looked in the back of my closet, and I saw an old red dress. It was short, could barely fit around my ass, and left my back bare. I smiled, thinking about the fun times I used to have at the clubs wearing that dress. It took me back to a time before I was married, before the kids, work, and responsibility. It was a fun, carefree time.

I contemplated whether I should wear this thing. Would it even fit? I decided to give it a try.

The dress fit like a glove. I guess all the time that I spent on the elliptical had paid off. I looked in the mirror and smiled. I felt like I was 23 again. As I looked at my tight, curvy body rocking that dress, I thought to myself, “Why the hell did I ever settle for a bum like Pete?”

I heard the doorbell ring and went downstairs to answer it.

It was Bill, Pete’s boss, and his wife. Bill’s eyes widened as he took in my dress. He started to mumble over his words and managed to say, “Wow . . . um, I mean hi, Tiffany.”

I smiled and puckered the scarlet lipstick I was wearing. “Would you like a beer, Bill?” I asked him with a wink.

I walked in front of him as I led him into the kitchen, letting him stare at my ass swaying back and forth. I bent over at the refrigerator to get his beer as he watched me slack-jawed. His wife was standing next to him, pissed off. I smiled, genuinely amused at the situation.

Pete stumbled off his fat ass and wandered into the kitchen. “Hey, Bill,” he said monotone, and then he saw me in my dress. “Tiffany, that’s . . . um, that’s quite the dress.”

“I wore it when we met. Sentimental value, I guess.”

He sighed and went to the refrigerator to get his beer. The doorbell rang again.

When I opened the door, I gazed upon a young, delicious specimen of a man. “Hi, I’m Daniel,” he said, smiling at me in a flirtatious manner.

He wore a tight polo shirt and his muscles bulged out, with the sleeves barely able to contain his strong, muscular arms. He was tan, clearly someone who spent some time at the beach. His whole body was quite the sight, with strong, broad shoulders. To top it all off, he had a firm jawline and deep, brown eyes. By the way that he was looking at me, I could tell that the attraction was mutual.

“So nice to have you here. How do you know my husband?”

Daniel was exactly what I needed. Here was a virile man who could fuck me the way that I wanted to be fucked. He had the body I wanted. I decided to be forward. I walked right up and let my hand caress his muscular arm. I whispered into his ear, “I’m Tiffany. Do you like this dress?”

He laughed nervously. “Um, yes, I do, Tiffany.”

When the game started, my husband and his friends sat down in the living room, eating snacks and drinking like the drunks they were. Daniel nervously drank a beer, obviously enamored at our encounter a few moments before.

I walked out into the living room. “Hey Daniel, do you think you could help me with the sandwiches?”

He smiled and nodded. When we went into the kitchen, I told him, “Oh darn, I have more beer down in the basement. Want to come and get some with me?”

He smiled and nodded.

I walked in front of him down the basement stairs, making sure that his eyes soaked in every wiggle of my tight curvy ass.

At the bottom of the stairs, I moved in close to him and caressed his chest.

He nodded. “I don’t fucking care,” he told me as he smiled devilishly.

I leaned in and kissed him. He was hesitant at first but quickly began kissing me back. His hands grabbed the back of my neck as he drank in my lips. I reached down and felt his growing cock that was filling out his jeans. I reached underneath his polo shirt and moved my fingers over his rippling abs.

I pushed him against the washing machine, allowing my hands to dig into his firm chest.

I whispered in his ear, “Do you want me to suck your cock?”

He nodded as I dropped to my knees and unbuckled his belt. I felt his hard dick within his pants.

I decided to toy with him a bit. I licked the denim, heightening the anticipation of the cock sucking. “But it’s so bad; I’m a married woman! I’m your boss’ wife!”

I stood up, grappling his cock between my fingers.

“I don’t fucking care either,” I told him as I gently stroked the bulge in his pants and looked at him straight in the eye.

I dropped to my knees again and unleashed his hard cock. It was at least eight inches long and thick. I smiled, looking upon his girth.

I took my mouth off of his cock and spat on it, then began stroking him.

“Do you want this pussy?” I asked him.

I sat down on my clothes folding table and spread my moist cunt for Daniel. I pulled him in by the shirt, and his cock slowly entered me. Adrenaline pumped through my veins, and I let this young man stretch out my tight, wet cunt. He took his shirt off. I marveled at his chiseled, tan physique as he entered me.

He began to move in me slowly at first, but gradually he began to ease into a faster rhythm as his fat cock stretched out my inviting hole. He touched my breasts as he fucked me and started gently flicking my nipples. He then leaned in and kissed me, kissed me with pure lust, the way that my husband used to back when he was younger.

I gripped my fingers around his tight torso, allowing my thumbs to examine the curve of his rock hard abs. I looked up at him and stared into his eyes.

“I’m wet for that hard cock,” I told him. “You’ve wanted to fuck me since you first saw me in this tight dress, haven’t you?”

“Yes, Tiffany!” he cried out, as I could hear the sound of his balls slapping against my wet cunt.

I started rubbing my clit as I looked at this vigorous man. He was such a sharp contrast to my flabby husband. I liked watching this firm, muscular body slam against me.

“Fucking give it to me,” I said as I worked my clit and felt the pleasure crescendo within me. “Fuck me like you fuck your girlfriend,” I told him.

He started fucking me harder. “Yes, yes, oh my fucking God, yes,” I cried out. His sweat began glistening all over his body as I worked myself into a lusty frenzy. I felt the warmth of pleasure course through every cell of my body, as if everything within me was screaming, “Yes!”

My moans echoed throughout the basement, and I could only hope that the loud TV upstairs muffled my screams as I creamed all over his cock. As my pussy clenched around his fat shaft, I could feel him began to spurt within me.

“We’re going to have to do this more often,” I said as our lips parted. Daniel smiled and nodded.