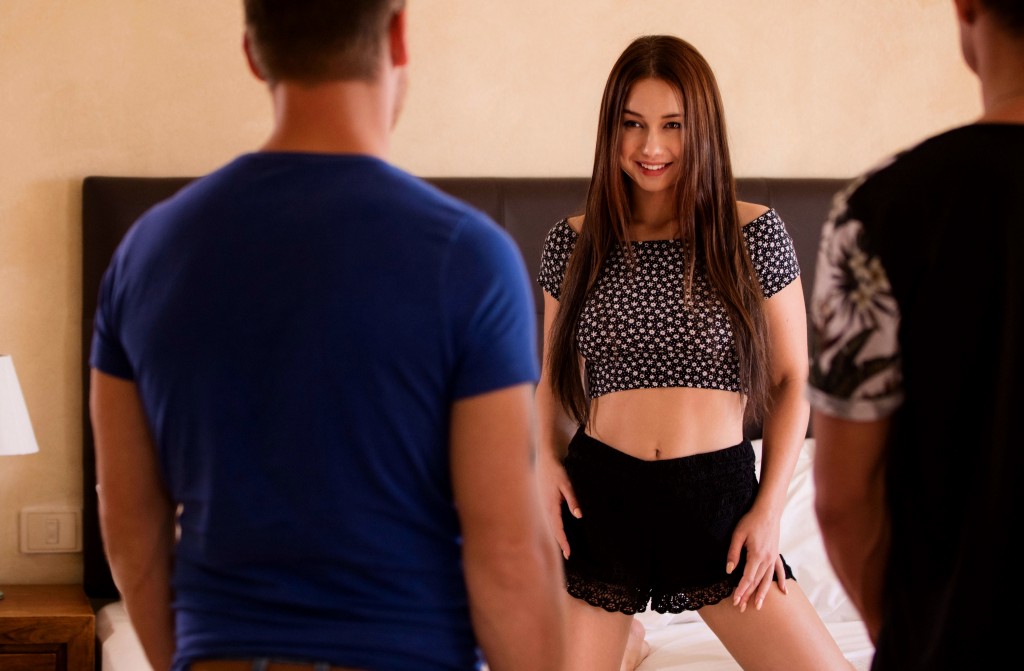 All the words began to fall into place. My friend from college said a lot over dinner, crossing boundaries our friendship had never crossed before. His wife, also my friend, Kim, had been acting unusually shy. The conversation had been difficult to follow after he said “affair” and “keeping our marriage together.” At these words, Kim lowered her head.

It wasn’t until we’d finished the cheesecake we had for dessert that I put it together. The Simms hadn’t just invited me to dinner because they missed me. Arthur had been having an affair with his secretary, and they were trying to keep their marriage together.

I’d had some wine with dinner, which was still swimming through my veins. I wasn’t too drunk to understand that they were propositioning me for something.

“Are you willing to do it?” Arthur asked.

Kim, who I had always found attractive, was staring into the placemat, avoiding eye contact. I might not be the dean of a college like Arthur, but I am smart enough to know that two affairs won’t fix a broken marriage. It didn’t matter. I could tell there wasn’t any talking them out of it, and I didn’t want to.

Kim had plump, thick lips, and long slender legs. Currently, she was wearing a white dress. The kind of dress that zips from the back. Under the table was a pair of tall heels, black.

“Are you asking if I will fuck your wife?” I asked boldly.

At this, Kim perked up. A smile crossed her face, showing she had been thinking about this for a long time. Now, she wasn’t looking away. Her eyes locked on me, and I could feel her undressing me in her mind. Blood pumped between my legs, lifting my penis until it became constricted by my jeans.

Arthur took a giant gulp of wine and forced himself to smile. It was clear he wasn’t excited but was willing to go through with it for the sake of justice or fairness. “She’s always had a thing for you,” he muttered. Earlier in the dinner, Arthur had told me about the dreams she had about me.

Kim was staring across the table at me with her big brown eyes, licking her plump red lips. I had fantasized about sleeping with her a lot in college, but I’d never predicted it would happen. I wondered what was under her white dress, what was the color and style of her panties. I speculated about the trim of her pubes. My imagination was already running wild. The question that begged an answer most was how wet she already was.

“Before you go through with this — do you mind if I watch?” Arthur asked.

Voyeurism is a big thing for some couples. Some people get off on being watched. I had never had someone else in the bedroom that wasn’t participating. The idea concerned me some, but I figured he might not let me sleep with her if I said no. There wasn’t much I wasn’t willing to do to sleep with Kim Simms.

Kim took my hand in hers, and led me away from the kitchen. My head was still swimming with wine, but I wasn’t too drunk to know that I was following the hottest girl from our college. She’d maintained her figure, too, long after graduation.

In the bedroom, Arthur pulled up a chair in the corner, sitting there, hands in his lap. He wasn’t saying anything, simply sitting patiently, waiting. He checked his phone for a second. For one terrifying moment I thought he was going to film us. I wasn’t sure I would have agreed to that, but with Kim standing seductively before me, I might have.

Kim pulled off the white dress, tossing it on her husband’s lap. Underneath was a set of matching pink bra and panties. She still had the same firm body she’d had in college. Her long legs seemed to stretch invitingly. Her smooth skin shimmered in the light. Before engaging, she did a runway style spin, modeling the lace outfit.

She sauntered across the room and put her mouth next to my ear. “You don’t know how many times I have thought about doing this,” she whispered. Her breath was warm and inviting against my neck. “I have masturbated to the thought of you, several times.” After saying this, she withdrew, and I could see the blush rushing across her face.

I didn’t need any more inspiration. My dick was standing at attention. My heart hammered in my chest as I stared at Kim, who was climbing onto the bed. Through the pink lace, I could see the crevice of her lips.

Kim wasn’t shy like she had been before. She was quick to usher me onto the bed and even quicker to unzip my fly. Judging by how fast my pants were on the floor, I guessed she really had fantasized about this before. Kim was a woman of few words, which added to my lust for her.

The whole thing felt forbidden and unforgivable. The entire encounter felt intoxicating. It felt wrong, but it felt right.

When her hand first gripped my cock, I jumped. I hadn’t expected it to be so cold in a warm house. It felt nice. Those honeypot brown eyes stared into me as she wrapped her lips around my dick, pulling it back in her throat on the first try. The unwavering eye contact as she slurped and sucked turned me on, more than anything before. Her throat felt endless.

My cock slid in Kim’s mouth with ease. She rested her lips on the base of my pubic mound, making my dick disappear. She began to hum, the vibrations jostling me, making my body tremble with pleasure. My eyes rolled back in my head for a second, and I thought if she kept that going, there wasn’t going to be any intercourse.

She pulled off for a second.

The bra slid off, and so did the panties. Kim climbed back onto the bed and spread her legs, looking at her husband, as if asking permission. Arthur smiled at this. Her beautiful pink pussy was spread open. Kim tested the water with a single finger, sliding it up and down on her clit, leaning her head back in pleasure. “I’m wet,” she whispered. When she pulled her fingers away, they glistened.

I was eagerly yanking down my boxers. When I slid into Kim, I couldn’t think of anything but her warm, wet pussy. I got in, adjusted myself on the bed, and began to pound into her as hard and fast as I could. I half expected Arthur to call it off at any moment. I wanted to get as much fun in as I could before he pulled the plug.

Her body felt soft under me. I grabbed one of her tits and pulled at the nipple, playing with it. The nipple instantly got stone hard. I couldn’t resist bending down and taking it into my mouth, rolling over it with my tongue, tasting her skin. The very scent of Kim was intoxicating. Playfully, I bit her nipple and pulled it with my teeth. I could tell she enjoyed it because her body responded very well.

The first moan was nice and soft. The second was louder and more intense. After a few minutes of heavy pounding, Kim screamed with pleasure. I ran my fingers through her long hair, tugging at it.

Kim turned over, moving into the doggy position. Now, I could see her husband over her back; he was watching intently. There was a lump forming in his pants. I wondered if he was going to ask to join in. It was clear by the expression on Arthur’s face that he was getting restless.

Kim was backing into me, pushing her ass against my cock, creating the motion. She found the rhythm quickly. I didn’t have to bend at the hips much because she was doing all the work.

I slapped her ass, hard. From behind, I grabbed her hair and pulled. She loved it rough. She told me so in a gasping whimper. It became clear she was having fun torturing her husband. There was a smile on her face.

“You feel so good,” she shouted.

Her words encouraged me to go harder and faster. Now, I wasn’t letting her do all the work. I was crashing into her hard, making her squeal with pleasure.

She stopped, looking up from the mattress at her husband. She beckoned him with a single finger. My dick was still inside, but neither of us was moving for the moment.

Arthur rose from the chair and walked over, unzipping his pants. When he was close enough, he slid it into her mouth.

Arthur was hammering away, pounding her like an animal, grunting and moaning. It was clear she was enjoying herself by the mile-wide smile. “Oh baby,” she muttered before wrapping those beautiful red lips around my dick.

The pressure inside was building. I could feel myself on the verge of exploding. I didn’t want to yet, but there wasn’t much choice. It was coming soon. I leaned back my head, staring at the ceiling as the fan whooshed above. I focused on enjoying the sensation of her head bobbing in my lap, those lips working miracles. I looked down again, trying to capture the image in my mind because I was afraid this moment wasn’t going to happen again.

My leg began to twitch. Kim noticed and doubled down. She grabbed my cock with one hand and began milking it, quickly. She shoved it deep inside her throat and viciously sucked. There was nothing left to do but unleash.

Euphoria passed through my body in waves. My leg twitched, and my body shook as I felt it coming. Kim had plenty of notice but didn’t move her head. I thought she swallowed, but when I looked back down, there it was. Her mouth was open, and she showed me the load before she swallowed it, even licked her lips after.

“Are you almost ready?” she asked her husband.

He pulled his dick from her pussy, and she turned around.

Kim grabbed him and popped it into her mouth and did the same thing to him she had done to me just minutes earlier. She worked hard, pulling and sucking. Arthur looked up as his body began to convulse. Kim swallowed his load too.