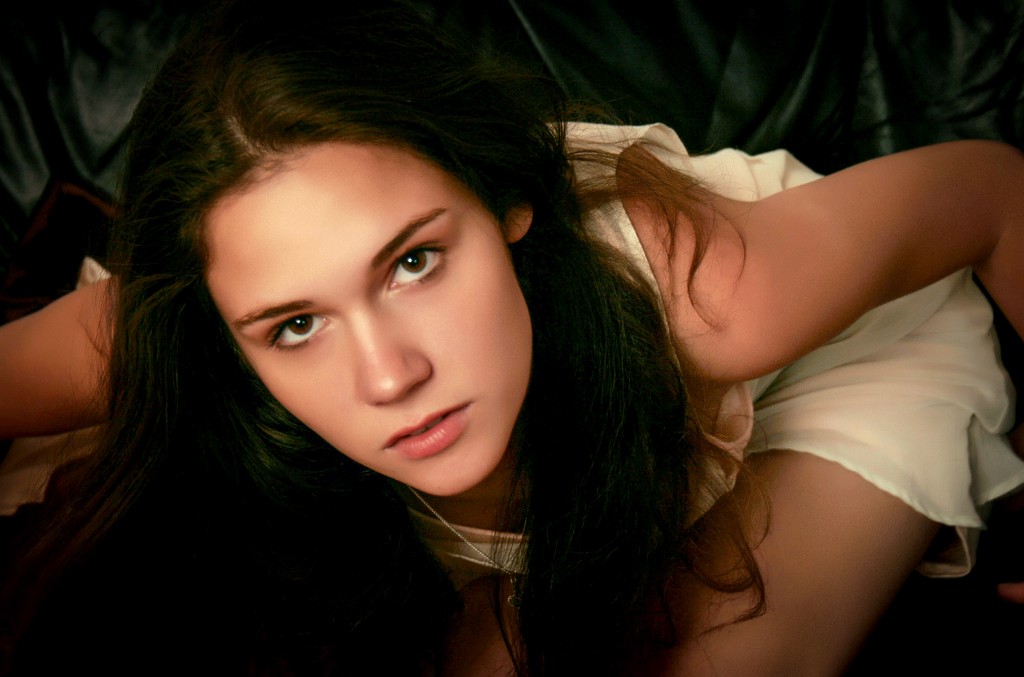 I’d shared with my boyfriend that I was turned on by pain, and he’d made me his submissive, his willing slave. So far, the experience had blown my mind.

Now his hands reached under my tee to hold a nipple between his fingers. I arched my back in anticipation, knowing what was about to come. He pinched my nipple until it was hard, his touch growing more insistent with each passing second. My body was responding frantically to his pinching and releasing. Just when I thought the pain was too much to take, he leaned in and put the other nipple in his mouth. He started sucking it hard, almost biting, his fingers still pinching.

His tongue swirled around wildly, while his teeth were clenched down, not letting me move away. I grabbed his hair in response, biting my lip so I didn’t end up moaning out loud from the pleasure. His pace got faster, his pinches harder, and the mouth sucking on my nipple so demanding that I had to close my eyes and whisper, “Aaaah. I’m coming.”

When I could hold it back no longer, he pressed his hands down hard on my neck to choke me. My body shuddered as a massive orgasm racked my entire being.

When I was done, I was sweaty and panting. The skin on my breasts felt sore and raw. He had beads of sweat on his forehead too, but the craving in his voice made my pussy tingle anew.

“No, slave. I’m not done with you yet. I’m going to fuck you now like the slut that you are, do you understand?”

So lost in his eyes was I, that it didn’t occur to me to reply. A hard slap on my right cheek brought me to my senses.

He sat up straight and pulled out his rock hard dick. It was too beautiful a sight for me to stop myself from taking it in my mouth. I had only intended on giving the tip a nice lick. But I got carried away and slobbered all over his beautiful dick, drenching it with my saliva. The sharp intake of breath he took made it difficult for me to take it out of my mouth and put it in my pussy. By then, my mind was in a whirl, and my body couldn’t decide what it wanted more.

“Ride me. Ride me, whore,” he breathed, but to my crazed senses, his words sounded more like a plea than a command.

I couldn’t decide which pleased me the most.

I pulled down my panties and sat on his erection, facing away from him. I was so wet that his dick went entirely inside of me with one thrust.

I slowed down, feeling his sweet love juice come out in spurts and fill me up from inside. There was a deep satisfaction in my body, but being as greedy as it was, it still craved more.

Moaning softly, I ground my hips, slowly at first, feeling his still hard dick twitch in response to my movements. My bare ass was rubbing against the hastily removed jeans around his thighs, and I reached down to pull the fabric away so I could touch his bare skin. In an instant, I felt him grow hard all over again.

I turned around to face him, and grabbing his hair for support, started moving faster. He moved his hips too this time — thrusting his hardness inside me deeper than I could have gone by myself. I rode him as hard as I could, those tender boobs bouncing against his chest, my body screaming out for more. We gasped and moaned together, each desperate to cum, yet greedy enough to hold back for just a while longer. He dug his fingers into my back, I pulled on his hair hard, and when we came together, it felt as if a million colours exploded all at the same time inside of my head.

I was exhausted, drenched in sweat. My legs felt tired, as if they had run a marathon. Panting, I pulled his body closer to mine in an embrace. He hugged me back and breathed deeply into my hair and on my neck. Our sweaty bodies intertwined and our chests heaving, we held each other for a long moment. I had been in a state of constant orgasm for a long while, but now my muscles relaxed, utterly satisfied.

Anamika Follow
« Waking her up
Cock-tales on the beach »

The Devil’s Triangle With Two Angels

Never Too Busy To Fuck