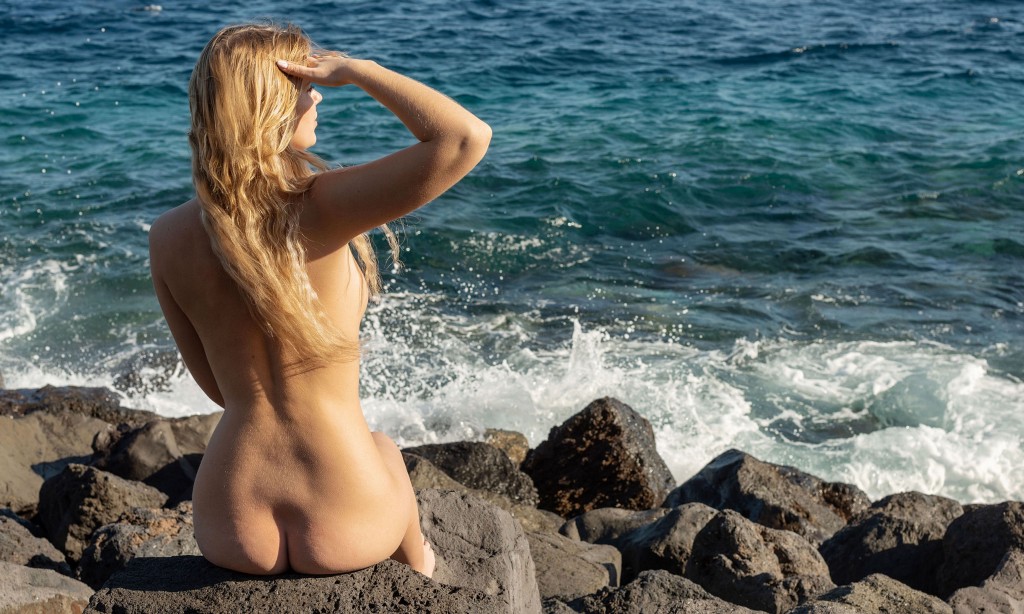 The neon pink rides the windy surface while she tries to keep afloat, balancing on all fours, her tan knees and elbows pressing dimples into the see-through plastic. We bought the inflatable on the way to the beach at Estérel, south of France. I am paddling right behind, looking up at the hovering view of her naked body, as the proverbial carrot.

I watch her pussy peeking out like a perfect peach from an angle that I have not yet seen. A cinematic image standing out amidst the background of shiny warm skin kissed by sun, sand and sea. I am doing my best, trying to reach the hidden, private cove to the right of the main beach. I can’t wait to get a piece of that peach.

We have been beach hopping for the past week, trying to scout the best locations along the coast. After the marinas and their white painted restaurant terraces overlooking the docked yachts, the rocky party beaches featuring fruit plates and boozy lemonades, and the sandy but busy public beaches, we decided to discover the local gem of secret nudist beaches. Not only for their promising serenity but also for the sake of Bunny’s tan which she wanted to keep free of bikini lines.

That day we woke up extra early, hoping to catch the sunrise upon arrival. The ride along the coast was a dream. The windy road overlooks the sea of the bluest blue and its numerous calanques — the cozy little beaches on the rocky seashore, accessible via steep downward paths carved straight into the rock.

When we arrived, after a lengthy and exciting search, there were already a few couples setting their umbrellas and towels on the narrow half moon of sand, laid perfectly among the dark rocks of the shore. I might be biased, but Bunny must have been the star of the place, the hottest girl of them all. The sea was of the brightest blue, flashing patches of turquoise where the sand on its bottom shone through, and alive with shoals of the most colorful fish, fleeing and coming back together over and over among the swimmers. Taking the first dip we stayed close to the beach, playing and chasing each other, Bunny diving deep and bringing stones from the bottom of the sea for me. At some point, upon hugging me playfully from the back, her hand came across an unexpected hardness. She proceeded to play with it, and wondered:

“Is this what it feels like to jerk off?”

I supposed so and thus she continued bringing my erection to its peak. Growing restless, I pointed to the secluded cove we’d noticed earlier, hidden from the sight of our nudist neighbors by a string of rocks and beach wood. Bunny’s eyes met mine in an eager agreement and so I find myself like the old man and the sea, pushing the boat (in my case the inflatable) with my prize to the promised land.

We arrived safely at the tiny speck of land, which was completely covered in dried algae. It was layered so thickly it felt like the entire beach was one giant mattress. We dragged our inflatable and ourselves back on land and Bunny proceeded to lounge over it, slowly drying in the sun. Once she decided to turn over and tan her belly for a while, I seized my opportunity. After all, I needed to protect her pussy from being sunburn…

The mix of salty water and her wetness gave me an instant hard on. I tasted summer as I felt her lips all the way up and down with my tongue, sucked in her clit and dived deep inside of her. I could not hold it anymore when she started moaning my name. She reached with her hands to me and motioned for me to get on top. She took a peek to make sure our folks on the beach could not see what was happening. Soon I was entering a symphony of flavors, she was so wet and ready for me that I started thrusting myself hard inside her immediately.

Missionary is low profile, perfect for what we needed. The cushion underneath provided the bounce and the sea breeze took away the heat from our skin, bringing the salty, intoxicating aroma of the Mediterranean.

Sometimes orgasms take a while to build… And sometimes they just go from 0 to 100 without changing gears. The mix of excitement and adrenaline forced us into an incontrollable release of the accumulated sexual energy. Bunny grabbed me as hard as she could, fighting her own spasms, her legs squeezing and echoing my quivering body as I filled her up, letting out a cry of the sweetest pain.

The swim back felt refreshing although it took longer as we floated on our pink inflatable, overcome by the post-orgasmic exhaustion. Collapsing back on our towels we recharged in the sun, catching that unspoiled bronze we came here for in the first place. Our fellow nudists were cool cats, nobody seemed to have noticed a thing.

We knew that nudists beaches were special. The sight of Bunny’s sun-kissed body spread on the white beach mattress in the rocky embrace of the cove is bound to become my favourite souvenir from the south of France.

21st Century Loving Follow
« After the Show, Before the Party
Her demon fortress~ »