Goddess and her Angel 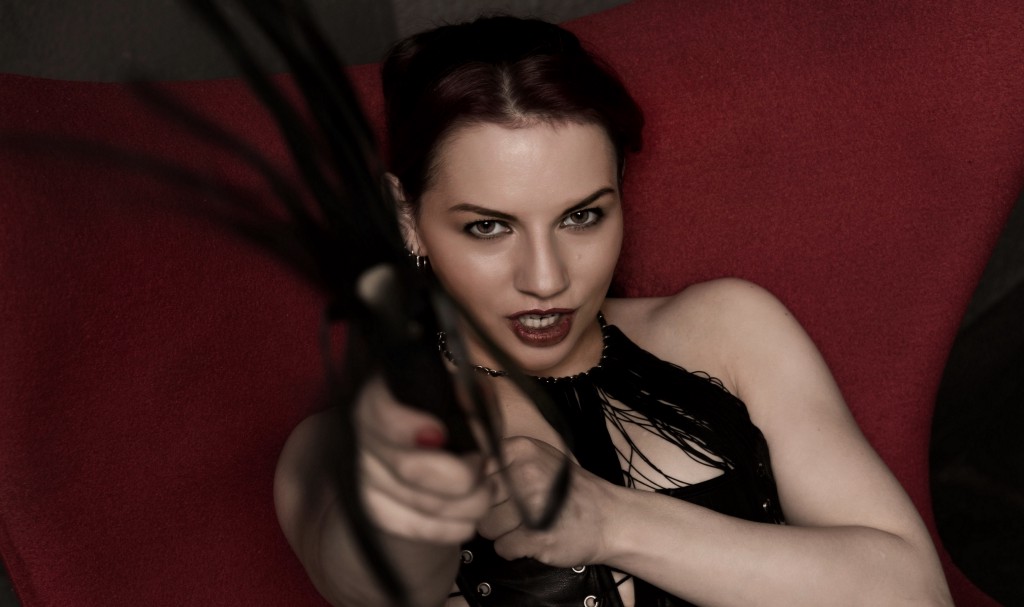 Goddess dragged the boy, clad in loose black, up the warped steps of the goth club. He lifted his feet with each verbal warning (“Step!”) and managed them blindfolded, wrists bound. She steered him through the graffitied door and into the dim cavern of their mutual pleasure. His nostrils flared as he took in the familiar scent: incense masking sweat, stale beer, and sour wine.

She removed the blindfold, his eyes wide, eager, baby blue.

“The Darkroom?” he asked with surprise. This was where they’d met two years ago, her bitter and black-haired, corseted in her goth armor, fresh out of a long-suffering vanilla relationship. When she’d spotted him, the blond boy swaying under the purple wash of laser light, she’d hoped to fuck he was at least a bottom.

That he was, and then some. His puppyish enthusiasm for submission under her guidance had been matched only by her hunger for bending him to her will. Their courtship had been brief before they’d settled into cozy cohabitation.

Angel’s black-lined eyes swept the club. They were the only souls present. Goddess had rented it out for his birthday. The electric throb began between her legs as Angel bit his bottom lip, eyes crystalline with tears. He’d long fantasized about being used in The Darkroom. He craved a night inside Goddess’s darkest heart, inside the blood-red heaven promised by the flinty eyes that captured and drowned him when they danced here.

Angel sank to his knees, holding her gaze. “Thank you, Goddess.” She hooked her finger through the O ring on his collar, pulling him to his feet, parting his lips in a hungry kiss. Her caress, as always, was invasive and thorough, her fingers snagged in his silky blond mane, teeth sunk into his neck, thigh between his legs teasing the hardness at his center.

“All alone in here,” she purred in his ear, loving the answering whimpers. “No one to hear you scream.” She gripped his throat, pinned him down with her eyes. The fear and arousal were one and his body vibrated with it, pupils blown and lids heavy. She could eyefuck the boy for days.

She slid her hand up under his shirt. “And all this pretty skin for me to mark.”

She led her shivering Angel onto the dancefloor. Green and purple lights streamed through smoky darkness, programmed to the music on her carefully crafted playlist.

She held him captive in her gaze as she yanked his arms over his head, securing his cuffs to the chain she’d rigged between two steel beams.

Her red-lipsticked mouth curved in a smirk as she produced a carbon fiber pocketknife from her skintight vinyl pants. She clicked it open in his face. Angel writhed in bondage, eyes dark with lust, begging to be torn open.

The blade slid beneath his black button-down, cloth parting in a swift surgical stroke. Buttons flew and scattered. She traced the blade over the smooth pale skin, faint lines of red across his torso, ending at his deliciously bony hips. Goddess tasted him, the copper and the salt, and his hips bucked uselessly in midair.

Growling, she ripped away the rest of the shirt, yanked the black jeans down to his ankles. He was bare beneath.

She feasted on the sight of her boy bound in darkness, the brutal throb of KMFDM weaving a spell that made her want to rend his flesh with her teeth and hands.

She went straight for the paddle, an inch and a half thick and leather-wrapped. With no warmup other than her hands molesting the creamy skin that was her pride and obsession, Goddess immediately went to heavy blows, tanning his ass red, the shadows echoing with leathered thuds and cathartic cries.

She paused, her blood singing with arousal, and stroked Angel’s back with her cool fingertips, gently squeezed his flaming ass cheeks, stroked his cock roughly. His makeup-smeared lashes fluttered, teeth sunk into bottom lip. Her sinuous slide from gentleness to sadism drove him utterly mad.

Paddle was switched for flogger, soft suede tails ending in small metal beads. She brushed the tails over his wounded ass, smirking at his shudder, and rained down swift, stinging strokes. Angel gasped, tears spilling over, back arching into the pain. That tender white skin, welted and bruised by the paddle, was now lashed with red, and Goddess shivered with bloodlust. She raked black stiletto nails over his abused bottom, grinning as his cry ascended from pain to bliss.

“I’m not done with you yet,” she said flatly, producing her next weapon, a flogger with lengths of heavy chain attached to the grip. She laughed as his cock jumped at the sight of it, and slithered the chain up his thighs, over his abdomen. He reeked of sex and prey. A deep kiss, her hand thrust between his legs, working his red and weeping cock. His gasp and desperate whimper. “Close, Goddess.”

She gave his neck one last suck and released him.

The first blow knocked the wind out of him, and Angel’s knees buckled.

Goddess pulled him upright by the hair. “You’re mine, Angel. Mine to hurt and fuck and love. Mine to destroy, if I want. And I love having the power to destroy you,” her whisper like rough black silk against his ear. His eyes glittered, lovedrunk, wet with gratitude. They’d needed this badly. It was easy to slip into a rut, into the workaday complacency of suburban death, even when you had a St. Andrews cross in the bedroom. For creatures that thrived in darkness such as they, ruts could be fatal.

Over and over she broke him down with chain and muscle, softening her strike to allow for the weight of the chains. Angel’s thighs, back, and ass were splotched crimson, the bloom before the bruise.

He sagged in his restraints, a long incoherent moan uncurling from his throat.

Now there was a soft fur mitt soothing his skin, followed by ice and ointment. His face was flushed and eyeliner-streaked and fucking beautiful, eyes dopey with subspace. She fed him a bottle of water, unhooked his cuffs from the chain overhead, and Angel sank to his knees, clutching her legs like a drowning man. “Loveyouloveyouloveyou,” he moaned, still vibrating from the intensity of the session.

Goddess knelt beside him, pulled him close in a messy kiss. “I love you, my sweet boy, my precious one, my Angel.”

She held him until his trembling subsided into lethargic bliss, then kissed him again, her hunger rising. She eased him back onto the velvet comforter that cushioned the floor, raked her nails down his torso, followed with her tongue, sucked a sweet pebbled nipple between her teeth.

“I’m not done with you yet,” she whispered, trapping Angel in her darkened eyes. He spread his legs wantonly, thrusting up against her, mind blown, desperate for release of another kind. She pressed her vinyl thigh against his naked sex, laughing against his lips. She’d fantasized about brutalizing him, making him bleed, then taking him rough and hard and screaming. He was now little more than a jellyfish blissed out on endorphins, so she’d go easier on him, but take him she would. She didn’t always fuck him after a scene, but she always gave him release. The sight of him undone, moaning out his pleasure, was as intoxicating to her as the sight of him arching his ass into her paddle.

She reached a not-so-steady hand between her legs to undo the hidden zipper that ran from navel to tailbone, and plunged her throbbing cunt down onto him, and the sudden wet swollen heat caused Angel to cry out, once, twice, then fall utterly still and twitching. She knew he’d come if he moved, so she pinned him down, squeezed her thighs against his ribs, gripped his throat, eyefucking him as she rolled her hips against him, riding him until she threw her head back and gasped out her own pleasure. A delicious litany of moans and whimpers escaped his bitten pink lips, underscoring the Strvngers song now pulsing around them. She continued fucking him, slowly, squeezing him until the moans became pleasepleaseplease.

“Are you ready to come, my Angel?” she murmured, licking his sweet dewy throat.

Angel licked his lips as she rolled away, sighing contentedly, zipping her pants back up.

“Thank you, Goddess,” he whispered.

“My Angel,” she said, stroking his face gently, tasting his tears, entwining her body with his. She wasn’t done with him yet. She would never be done with him.

Sadista Sharp Follow
« It Had to be Quick!
Her Oral Pleasure »