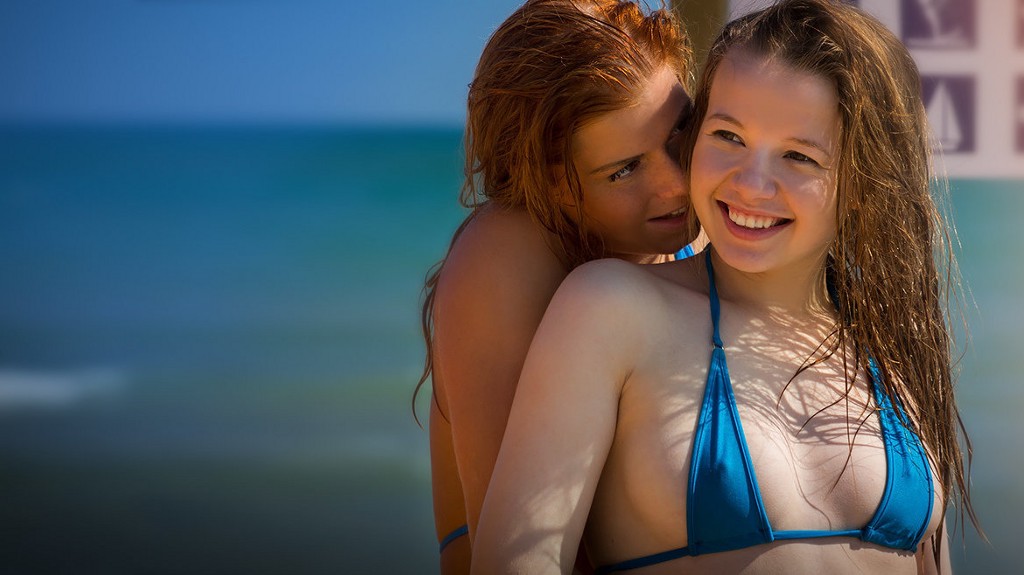 Claire fell back onto the bed and looked up at the hotel ceiling. It had been an exhausting week. She didn’t like to be away from home or the office for long periods of time, not that it mattered as much as it used to. The kids were in their mid teens now and she and her husband were more roommates than anything else. Still, she missed her bed and her coffee maker and the home comforts. She could have gone back tomorrow and under any other circumstances would have, but she had a very rare chance to meet Abby.

She laughed out loud at her own thought. Meet. The two women had already met a few times in person. And they’d known each other for five years thanks to social media. What they were really going to do was fuck. And then make love. And then fuck some more. She’d told Fred that the Sunday flight was cheaper. And that she had work on Saturday. Truthfully she’d been done today — Thursday — and she’d made plans with Abby.

Abby. Abby of the beautiful raven hair and steel eyes. Abby the yoga studio owner. Her fantasy lover come true. They’d met through a facebook group about yoga and chatted frequently. Soon that turned to talking about family, and then fantasies. They both admitted to being into women, and being in marriages to men that started out well but had eventually become stagnant. Then they started sharing fantasies and pictures. Eventually, they met in person at a workshop. They’d made it nearly seven hours before kissing. They missed the rest of the workshop but had explored their respective levels of flexibility and stamina.

Flight’s delayed. I will be there. I love you. Abs of Steel

Claire’s little nickname for her. She swiped her finger over the keyboard.

I miss you. I want you. I’m already wet for you. She pulled her skirt up and took a picture showing her panties and how wet they were.

Claire laughed again. She put her phone down and stood up. She hadn’t expected Abby for an hour or so. She’d already eaten so there was nothing for it but to get ready for bed and maybe watch a movie.

She fell asleep somewhere around the five-minute mark of the movie she’d been intending to watch, her body stretched out naked on the coverlet. When she opened her eyes she was lying on a blanket on the beach. The sun was beating down, warm on her lightly bronzed skin. The cooling ocean breeze brushed across her nipples.

The sound of feet crunching lightly on sand caught her attention. She sat up a little and saw Abby nearing the place they’d staked out. They often talked about going to the shore together but neither wanted to be public about their feelings for each other, even in a strange city. The lithe beauty wore nothing but barely-there bikini bottoms. The abdominal muscles that Claire enjoyed tracing with her tongue were gorgeous, but it was her face and her eyes that really captured Claire’s attention.

Claire patted the blanket. “Lie down beside me.”

“I have a better idea.” Abby fell to her knees near Claire’s feet and moved them apart. Bending over, she kissed Claire’s ankles.

Lips traced fire up her shins. Abby’s fingers reached for the more full coverage bottoms Claire wore. She pulled them down and passed over them with her tongue. “You taste so good.”

“Mmmmmm,” Claire moaned. She watched as the red bottoms sailed through the air but when Abby’s fingers separated her folds and that wonderful tongue flicked over her clit, she squealed. “Fuck, yes. Right there.”

Abby batted her lashes at Claire. “I know your body. I love your body.” To prove the point, those long, wonderful fingers moved deeper in and danced. At the same time, she sucked in Claire’s clit.

Claire spread her legs and dug into the blanket and the sand underneath with her heels. The warmth from under her and the sun blazing combined with the increasing heat from between her legs. As she cried out she felt like she was going to spontaneously combust. She plucked at her nipples with her fingers. “Jesus, Abs.”

The rapid squishing sounds coming up to her ears competed with her cries and Abby’s slurping. She could smell her own arousal over the cocoa butter and the salt air. She wanted to reach down and yank Abby up by that wild mane of hair and pull her to her lips. But that would mean stopping the suction and penetration. That just wouldn’t do.

Her hips jerked as Abby twisted her fingers and swirled her tongue. There was no doubt her lover knew every inch of her body and just how to treat it. “Wanna kiss you.”

Showing just how flexible she was, Abby contorted her body and gradually worked her way around Claire’s cunt so that in moments she presented her own wet bottoms to Claire. Waggling her ass, she continued munching and slurping.

Claire pulled the bottoms aside and lapped at the pink, glistening lips. Ordinarily, she couldn’t remember tasting anything in her dreams, but the rich sweetness of the clear fluid filled her mouth. It was amazing. Her orgasm built quickly, blooming out from between her legs, racing down them and up through her belly.

She gasped and squealed as she pushed her face deeper into Abby’s slit. She wanted to talk, to scream, but again that would mean stopping. She ran her tongue from Abby’s pussy to her ass and back.

Apparently, that maneuver — new to their sexual adventures — was enough for Abby to pull her mouth back. “Do that again. Do that again, please.”

Claire did, this time swirling around the dark pucker.

Abby’s nails clawed at her thighs. The pain was sharp.

Claire opened her eyes. The bedroom was dark and she was going to gasp but she couldn’t. Her mouth was full of sweet flesh. Familiar flesh. She dove back in with gusto and soon she and Abby were both coming, thrashing around on the hotel bed. Their moans of pleasure climbed and climbed until they both lay still in a tangle of arms and legs.

Abby moved around once she was able and her breath puffed into Claire’s face. “You were sound asleep. I thought I’d wake you up easy, but instead, you did some sleep fucking. You must have been having a nice dream.”

Abby raised an eyebrow. “What do you mean?”

“Let’s go to the beach tomorrow. And then let’s be together. Forever. I’m tired of sneaking around and catching spare moments. I want this dream to be reality.”

Abby kissed her harder than she had ever been kissed. “Do you mean it?”

Claire kissed her back. “I do.”