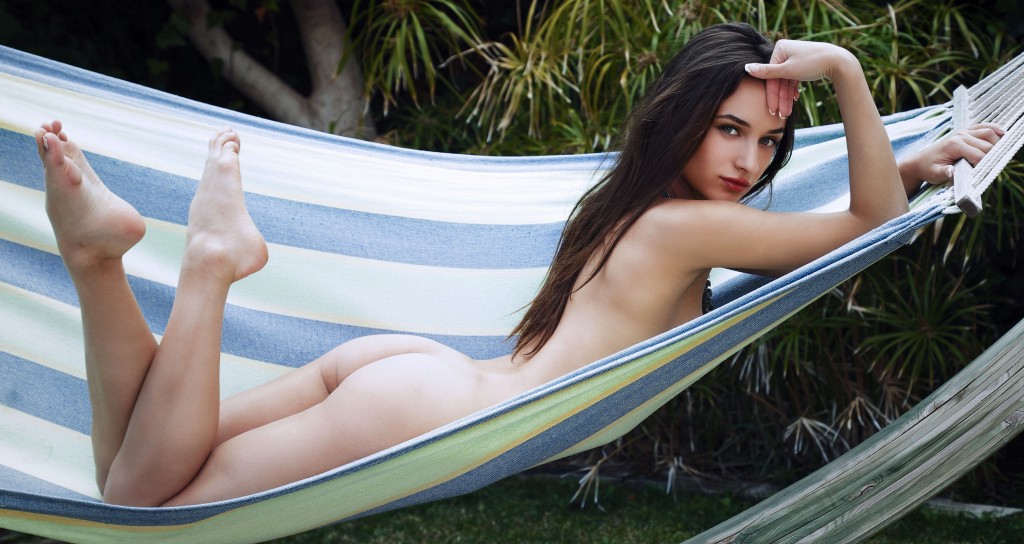 Bee closed her eyes and her mind wandered to the Caribbean waters of her upcoming holiday. As she opened them again she was swinging slightly in her new hammock, lying sideways with Bunny on her knees working on her clit. At the other end Teddy was standing up presenting his erecting manhood to her. She had grabbed it and started gently licking it like a lollipop.

It all started while they were strolling around IKEA browsing for ideas for furniture for Bee’s new apartment. As they arrived at the garden section they were attracted to the hammock. Bee had always been thinking about having one in the living room. Bunny sat down on it sideways and their dirty minds started working on the logistical challenge…

Back home, from all the furniture that they had to assemble they chose the hammock first. Carrying all the boxes had made them thirsty and hot. Teddy had to remove his shirt as he was assembling the metal frame of the hammock. The girls decided to get some drinks to refresh themselves.

Do you have any beer?

They went to the kitchen as Bunny was asking Bee about her upcoming trip to Cuba. Bee had been showing her some of the outfits she planned to take along. As Bunny was squeezing the lime juice she asked Bee if she had some ice. Bee got the ice tray out, took one cube and placed it on Bunny’s neck, on the back after moving her hair out of the way. “That feels refreshing,” were the words from Bunny. The girls looked at each other, a mischievous thought jumping from one brain to the other.

They walked into the room where Teddy was just hanging the hammock from its frame. He raised up his eyes to greet them, and said, “Who wants to test this?” Bee proceeded to the hammock and as Teddy was helping her sit down Bunny got her hands under Teddy’s t-shirt and placed two cubes of ice on his back.

Teddy started shivering, but not knowing if it was Bunny’s touch or the ice. At the same time Bee’s left hand moved to his waist and unbuttoned his shorts, with her right hand finding its way to his manhood. It felt as if the pirates on this Caribbean ship were staging a mutiny. He looked at them and knew that he had already surrendered. It was not only that he was outnumbered, but also that he immediately liked their ideas for cooling down from this heat.

Bunny was now pulling his shirt off him while Bee started stroking his manhood. Bunny also removed her summer dress, and all she was left with was her panties. She embraced him from the back with her hands under his armpits holding his chest. As he closed his eyes his mind also transported him to that Caribbean beach, with the soft caress of Bunny’s breasts on his back feeling like the magic touch of the sea breeze.

He turned his head looking for Bunny’s mouth. Their kiss was passionate to match the temperature of the room. Bee used that window of opportunity to move his pants and boxer shorts down, and to get the tip of his manhood in her mouth. The back and forth sucking on his shaft felt in rhythm with the waves of the ocean.

Bee still has her clothes on!

Were his words as they paused kissing. Bunny let him go and moved to the other side of the hammock. She placed Bee’s feet on the sides and removed her panties while pulling her dress up.

It was as if she had found the pirate’s bounty. The beauty of Bee’s pearl was expectantly waiting for Bunny. She got on her knees and started to explore the length of her labia with her tongue. Bee was now the center of attention. She was enjoying sucking Teddy’s manhood and feeling how it was getting harder and harder by the second. And she loved the attention that Bunny was giving to her sex. The gentle rocking of the hammock made her feel as if she was already in that tropical paradise.

Bunny’s and Teddy’s eyes found each other and again a telepathic mischievous idea flew through the air. Teddy moved to the other side of the hammock as Bunny stood up and made space for him. She went to the other side and got onto her knees and started kissing Bee while caressing her breasts.

Teddy was now grabbing Bee’s waist and penetrating her slowly. Bee closed her eyes and could feel how a force of nature was descending over her. In a similar way that a tropical storm shows up unexpectedly, the rocking of that hammock intensified suddenly. Teddy placed Bee’s feet on his chest to help her to be more steady. The rocking motion made her feel as if she was now floating in the warm waters of the Caribbean Sea.

Bunny was rolling with the rocking back and forth. She had wet her fingers and was now rolling her fingertips on the tips of Bee’s nipples. Their kissing was playful, and Bee was really enjoying the attention on her. She placed the fingers of her right hand in Bunny’s mouth for her to wet them and then moved them down to focus on her clit.

The rhythmic in and out, the sweet kissing of Bunny, the combination of hands on her body, and her familiar way of touching herself started driving her into orgasmic madness. She started synchronizing her strokes with Teddy’s motion.

She closed her eyes and her imagination transported her back to the sea. The clean waters of the Caribbean Sea. The fresh breeze, and the sea waves on her. She could feel how the waves were getting bigger and bigger. She knew that the big orgasmic one was going to engulf her any second now.

And it did. She gasped for air as it happened, and opened up her eyes to meet the smile of Bunny who was holding her in position. Teddy had noticed that she had gone over the edge and was steadily holding her by her hips. The shaking of her legs and the contractions of her vagina on him were delicious.

There would be time later to finish assembling the rest of the furniture. Right now they decided to take a shower together, to get their temperatures down. It was a good beginning of a long summer weekend. A good way to get in the mood for that transcontinental flight to Cuba in a few weeks.