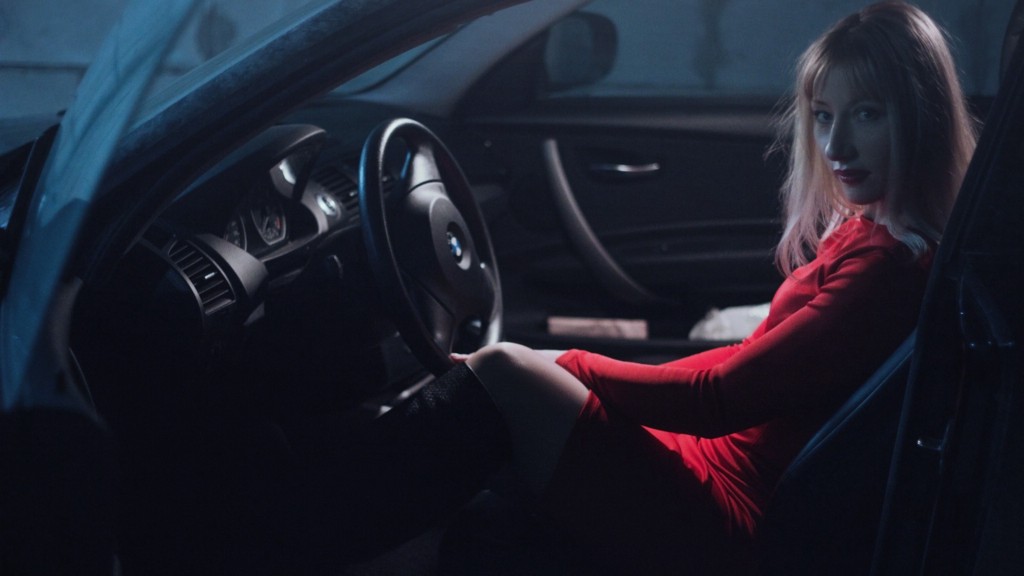 I fought the handbrake and turned off the key to the ignition; preparing myself for whatever gag she had planned. “What do you want to know?” I said to her.

Even in the moonlight, she was still all hair and cheekbones. Her mouth opened and closed several times before she finally admitted, “I’ve only ever practiced on a banana…”

By now she was embarrassed, and slouched back into her seat.

“Maybe you could help,” she said and uncrossed her arms. I caught her sneaking a look at my erection; suddenly she saw it differently.

“Help how?” I spoke up now. I’d never been with anyone other than my own hand.

The light from the dashboard adjusted softly around her bare shoulders, and it distracted me. I almost missed her help herself to the bottom of my shirt. As I watched her slowly untuck me, there was an unexpected lewdness that took cheap cotton and turned it into silk. Suddenly I learned why other men flocked to her. That allure nearly hid my conscience from me — my all knowing voice that saw so many things wrong here. For starters, she and I had been friends for years, and I just tanked all of her boyfriend’s growing suspicions. My penis pushed aside any logic standing between it and the seam of my jeans, eagerly wanting to be freed. I looked at her, wide-eyed; she dared at our consequences.

“Can you pull these down some?” Her voice low as she unbuckled her seat belt to set down a large soda she’d bought, on the floor.

I said nothing, lifted my ass, and yanked my pants and underwear halfway down my thighs. A ball of saliva forced itself down my throat the moment she got up onto her knees, and bent over the center console between us. I quickly peered down her shirt and watched her breast push up against the back of her elbow, while she reached for my leg.

Keeping her fingers together, her hand traced lightly along my inner thigh. I tried to react normally. But by the fifth stroke down my shaft, she led me from friendship, to indifference, then open desire.

We French kissed while she touched me.

“Do you like this?” She paused and breathed into my mouth.

“What do you like?” Her movements now slow and firm, gliding up to the tip in one long stroke.

I watched myself push out from the rabbit hole between her thumb and index finger; imagined this was what sex looked like from inside.

“What about this?” she said, and rubbed the most sensitive part: slightly below the head. It was like I was touching myself.

My eyes closed and gave her complete control of my body. The way she moved her lips demanded I kiss her, like no other man could. We enfolded with one another into a single breath and she giggled at our noses bumping together – discovering a new closeness.

She paused for air but still worked her thumb, and index finger to assiduously massage around the tip.

“God damn,” I groaned to let her know she’d completely reeled me in. Her strokes tightened and bunny hopped into short bow strokes. Every now and then she’d change her pace, and brush closer towards the head. My lower back and thighs beckoned at her touch, unable to completely relax. The entirety of my physical being was overcome with the weight of a million feathers. And I pushed deep into my seat, ready to lose myself within this ecstasy, forever.

My body rocked awkwardly in time with her until I couldn’t keep up. I checked in on the sensation stirred deep within my hips – I wasn’t ready for the night to end. I tried to control it and bucked myself down… but instead accidentally added a little something else to the moment. She stopped.

She waved my erection side to side, and made several faces at the fluid formed at the center. I felt an awkward tap on the top of the head as she pressed down at the leak.

“It’s precum.” I too was fascinated by the string of mess between her fingers.

“Oh wow!” She broke from an unblinking stare and reworked the shaft. In that very moment, she scooped up some of the precum and squeezed it around inside her hand as it wrapped around me. Her grip was soft to the touch, and unknowingly showed me what it felt like to be inside the real thing. But after a while, the precum made my already dry dick even drier.

“Sorry!” she heard me wince, and pulled her hand back straight away.

“It’s okay,” I said before I showed her how happy my erection still was, able to stand up on its own. “Just don’t stop now.” I looked deep within her eyes, and eased her doubt — because what else were best friends for?

The car accessory lights finally turned off and my eyes took a minute to adjust. I watched the faint glow of her lipgloss reflect a nearby street light, and followed it closely, like a sailor lost at sea. She leaned down. I assumed she struggled to find her way through the dark. But as soon as I felt her breath heavy against my skin, it seemed she’d managed just fine.

A rush of adrenaline helped my vision adjust in time.

I wondered if this was a part of her experiment too. But I stopped myself from saying or doing anything that could snap her out of it, and quickly held it upright… watching; waiting for her to slowly part her lips. I was careful not to thrust too suddenly at her – even my hand’s movements were lighter. I kept my grip low and left room for her at the head. I wanted her to suck it.

I moaned with pleasure and produced another bead of precum for her. Then suddenly, there was a vacuum of air around it. Her neck tensed as she held her breath and sucked saliva from around the inside of her mouth.

I relaxed as she dripped the last of it down into my lap.

“Maybe next time,” she teased her lips together at me, and then carried her hand over mine.

I threw my head back and groaned as she helped us up and down, fast.