Lust in the Studio 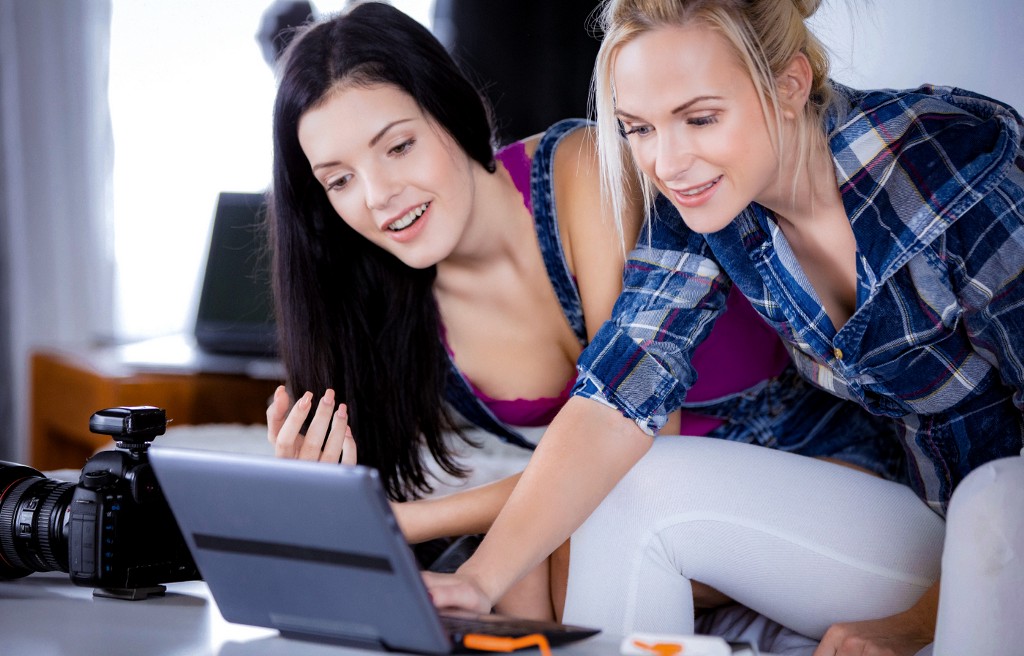 I love photographing other women. It’s not always a sexual thing. There’s just something about it that calls to me. Body shape, size, skin tone — none of that really matters. Transgendered women have the same energy. That’s it, I guess. It’s the feminine energy that comes through the lens. It makes my soul hum and my body tingle.

Ok, sometimes it is about the sex.

When she came into the room, the air had a crackle to it. My fingers itched to capture it.

She shifted from foot to foot, running her hand through that lustrous, black hair. “I’ve never done this before.”

My throat got dry. She meant the shoot. That’s all. “Don’t worry. It’ll be painless. You just do what I tell you and we’ll make magic together.” I lifted my camera to one eye and made a few adjustments. Then I started snapping. She didn’t know I was taking pictures yet. I wanted to catch that nervous energy.

I took her through a few basic poses. Told her to lift her chin, turn her torso, stand on tiptoe. This was all for building a portfolio. She wanted to be a model. She had the looks and charisma for it.

She didn’t complain about holding poses or get fidgety. She pouted, but only when asked. She had a delectable bottom lip.

“Ok, come take a look.” I gestured for her to follow me. We’d been shooting for an hour. The next room had some comfortable chairs. I hooked the camera to my laptop and started downloading the shots. “This will take a while, Rebecca. Want something to drink? I’ve got beer, lem…”

“Beer.” She smiled. That smile made my stomach clench. She wouldn’t be undiscovered long.

I reached into the mini-fridge and grabbed a couple of beers. I cracked the top off of one and handed it to her before opening mine and taking a pull. My mouth was dry. My panties weren’t.

She drank and I watched her throat constrict as she swallowed. I watched her breasts move. Her nipples were hard against the white cotton of her shirt. The shirt had ridden up a little revealing a bit of tummy bulging. She wasn’t a gym rat, though she was toned.

“Like what you see?” There was humor in her voice.

“Busted. Sorry. I can’t turn it off, even when the camera is on the table.” My eyes moved up to hers. “But to answer your question, I do. I hope that’s ok.”

She bit her lip and smiled. “It’s ok. I think you’re pretty cute too.”

I was flattered. I was old enough to be this girl’s aunt if not her mother. Silver was already adorning my blonde hair and I had more curves than I liked. “Thank you.”

“Blushing makes you even cuter.” She put down her bottle and stood, walking over to me.

I was blushing, wasn’t I? I was still standing, too. And there she was, in front of me. Lips parted. I leaned in and took what I perceived to be an invitation. Our tongues teased and lips played. She had done this before. I slipped a finger in the waistband of her jeans and pulled her closer.

Her arms closed around my waist as she kissed me more deeply, moaning into my mouth.

My finger could find no trace of fuzz as it wormed behind her zipper. Or anything between denim and skin. I locked eyes with her and raised an eyebrow.

I popped the button and unzipped the fly. My fingernail found her wet slit as she bit my lip and sucked it into her mouth.

She grabbed my ass and her tongue proceeded to thoroughly examine my soft palate and anything else it could reach.

I ran my hands up under her tee-shirt and thumbed her nipples. They were as hard as stones. We worked together to remove one another’s shirts, hers plain white and mine the shade of black you get after a few hundred washes. They mingled on the floor and my bra followed.

My softer breasts brushed just under hers. My hands explored her ass, pushing her jeans down as far as I could. I moved us back until her legs bumped her chair. It forced her to sit and I knelt between her legs pulling off jeans and shoes in one motion. Her legs were over my shoulders in no time.

My lips busied themselves on her plump, wet slit. She tasted clean, with a subtle tang of sweat. My tongue probed and my nails skated up and down her legs.

Her moans and sighs battled with the music coming softly from nearby speakers. Her fingers tangled in my hair. “Fuck yes. I love your tongue.”

I pushed my fingers into her as I focused more on her clit. My tongue rolled in waves, crashing against the little bud.

“Oh god, what even is that? Don’t stop.” One foot moved to the small of my back.

I was grateful for the genetics that gave me such a nimble muscle, sharpened as it was by many, many hours of just such use. I didn’t break contact to tell her any of this. Instead, I reached for and found her G-spot.

Her juices flowed over my fingers and down into my palm. Her other foot moved to the arm of the chair, opening her up to my explorations. “So close.”

I hammered her G-spot and sucked her clit while still using my tongue to swirl around it. Her first orgasm had her legs kicking and shaking. While her body still shivered, she pulled away from me and turned around in the chair presenting me with her peach of an ass.

I buried my lips and tongue in her still sensitive flesh and used my wet fingers to explore between her cheeks. She pushed against me, opening her body to me. A few minutes of tasting and touching and her upper thighs were covered with arousal.

I heard her teeth scrape the fabric of my chair as she gnawed on it to muffle her screams.

I pulled my mouth away from her ass, long enough to encourage her to be as loud as she cared to be. The shop was soundproofed. Then I had my tongue back inside her tightest hole. I wanted to taste every square inch of her.

A few minutes more and her thrashes and screaming started to increase in tempo. I pulled my mouth away and kissed up to the back of her neck, holding her as she came. My wet pussy pressed against her firm ass.

I pointed over to my camera. “I can make that happen if you want to have another go?”

She reached back and grabbed my hair again. “Yes. Oh god, yes.”