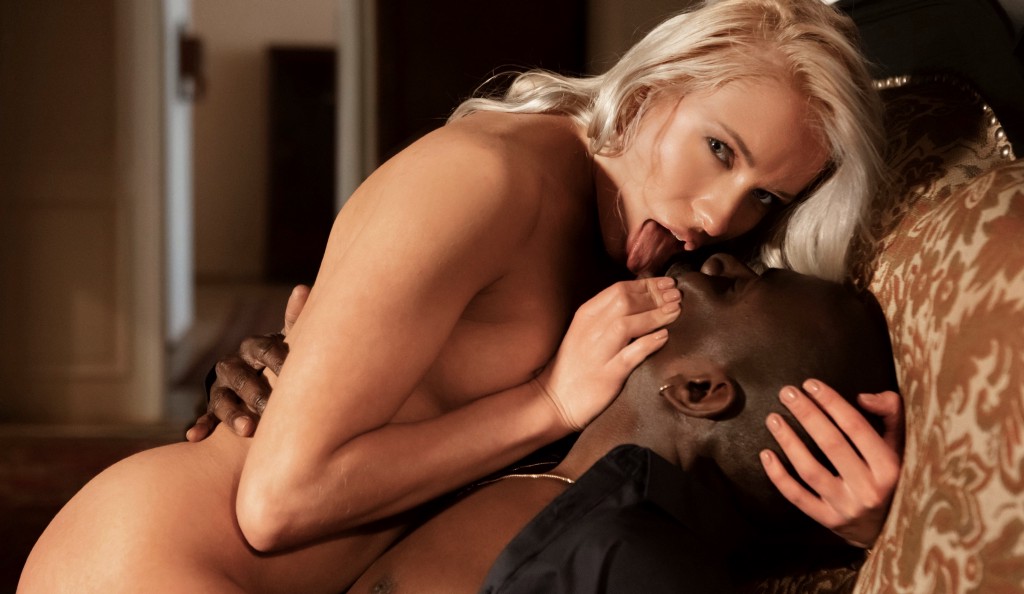 Jessie slid forward to sit on his face. Mickey probed her pussy folds with his tongue, grasping her butt cheeks with both hands while she resumed wrestling his prick with her husband. Daniel stroked Mickey’s shaft and held it for his wife to pull with her mouth. Mickey’s girth was unlike any the couple had enjoyed in a long time.

This wasn’t entirely new to them. They had been involved in the swinging lifestyle; it was how they met. But Mickey was the first black man they’d spent time with. To think that they’d relocated from the mid-west to come settle in this quiet neighbourhood, only to discover how great it was to have a black cock in their midst, was something neither could quite comprehend. Jessie took her mouth from Mickey’s prick and pulled husband’s face to hers and stuck her tongue into his mouth. This was the best gift he’d given her in a long while.

“I want to ride his cock,” she breathed, then chuckled after saying it.

“You’d better get to it then, lady,” Mickey told her. He too couldn’t wait for that to happen.

Jessie slid across his torso to plant her butt on his pelvis, leaning backward over him. Daniel sucked pre-cum off Mickey’s cock before slipping the mushroom-shaped head into his wife’s pussy; her pussy looked so hungry for something to fuck. Daniel knew his wife well. She was a genuine slut always itching for a hard cock to fuck, just like she’d been when they first met and before they married. She was one woman he knew who could wear down a dildo’s batteries in a day. The sight of her fucking someone other than him never failed to get his blood pumping.

Jessie rested her arms behind her head while Mickey worked his legs, fucking her hard. Daniel sat back watching for a moment, but soon edged closer and ran his tongue over Jessie’s swollen clit bud while her body enjoyed the thrill of the black cock now half inside her. Mickey spread his legs to give Daniel enough room.

Jessie was now working her butt up and down, whimpering while she did. It allowed Mickey to grasp her tits with his hands. His fingers played with her nipples while she moaned from her sexual exercise. Daniel licked the creamy juice dripping out of his wife’s cunt, then focused on Mickey’s testicles.

Jessie sat on her haunches as she adjusted to Mickey’s girth pumping between her legs. The thickness of his prick fucking her spread pleasure like wildfire all over her body. Mickey balanced her butt on his hands as he rammed her pussy harder. Jessie squirmed and whimpered from each pounding she took.

Daniel licked his lips, loving the sight of Mickey’s cock slamming his wife’s cunt. He came to her side and fondled her bouncing tits. Jessie flipped her hair off her face repeatedly; her features squeezed from the hurting pleasure of being fucked so hard.

Daniel returned to his former position and watched the action from the end of the bed. He jerked off in double-time rhythm to his wife’s soaring cries. He could barely contain his voyeuristic urges. He gazed down at his hand and wasn’t surprised to find that he’d climaxed ahead of them.

Mickey pulled Jessie downward, then turned her over onto her side. She raised her leg to guide his prick back into her pussy. Seconds later she was back to her whimpering cries as Mickey resumed fucking her deep. He turned her head towards him and they shared a passionate kiss while still connected with each other. Jessie rested her head on her arm, groaning from having her pussy stuffed. Her hand slid between her thighs to caress Mickey’s giant testicles, playing with them while his cock continued its thrusting motion. His testicles were a lot bigger than her husband’s, the same with his prick. For Jessie, size mattered plenty.

“I love your fucking cock!” she moaned, reaching a hand over her shoulder to caress Mickey’s chin.

“You’re gonna love it for a long time,” Mickey responded. He pulled her face towards his and kissed her again.

After a while, Mickey pulled out and rolled on his back, gasping. Daniel seized the opportunity to come and perform his ‘clean-up’ duty. He took Mickey’s cock in his hand and polished his knob clean of his wife’s cunt juice. Daniel always offered to perform this task on men he’d allowed to fuck Jessie. This was their fourth encounter with Mickey, and the fact that he was okay with this interaction made him special in their book. Especially Daniel, who was happy to share in this cock worship.

Mickey returned to his workout now he had some strength back in him. Jessie positioned herself on all fours and was whimpering again as he penetrated her from behind. She fought to stifle her cries to no avail, especially as he went back to fucking her hard. Her hand stole between her legs to rub her moist velvet pussy as he thrust into her cunt. Mickey grabbed a fistful of her hair and smacked her butt with his other hand while Jessie could do nothing but mutter moaning cries. Daniel ducked his head behind Mickey’s butt and enjoyed the sight of his wife’s cunt getting expanded. He took pictures of the moment, too.

Daniel came and lay beside his wife, wiping dots of sweat off her brow. “Your pussy looks so good, honey,” Daniel murmured, then kissed her. “I love watching you get fucked from behind.”

“Clean that black dick, white boy!” Mickey demanded. “Suck it like you love it. Tell me you want only black cock fucking your wife from now on. Say it, white boy!”

Daniel stopped to answer him. “I want only black cock fucking Jessie’s pussy!” he gasped. “I want it!”

Daniel gave a head-nod and murmured his acceptance while still slurping over Mickey’s prick.