Dinner and a Lap Dance 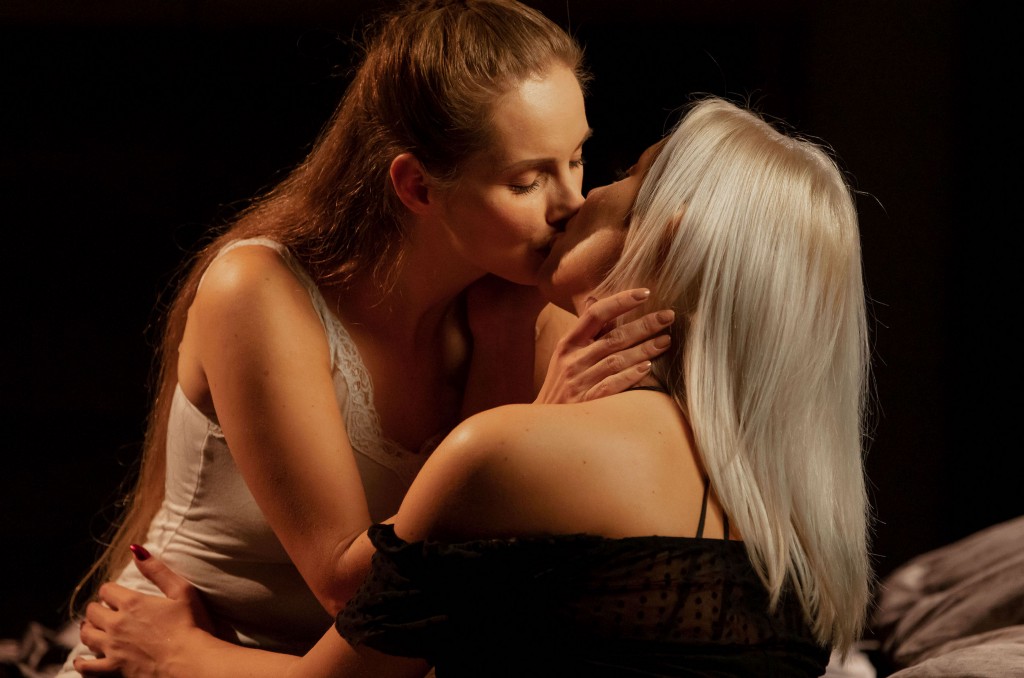 She was the third or fourth dancer we watched that night. We were sitting a few chairs back from the main stage in a plush banquette along a side wall. I noticed my wife watching her intently while she was on the warm-up stage, and as the dancer walked to the main stage, the lights behind her body cast a voluptuous silhouette.

She had the aura of a 1920’s pin-up girl with 2020 updates; petite in height with thick thighs, a round firm backside, black hair, and Betty Boop augmented reality boobs. She climbed the stairs to the stage effortlessly in her high stiletto heels, placed one arm on the pole and casually leaned out to one side. Then leaning forward slightly, she dipped down to gather herself and jumped into the air, quickly rotating around the pole as her tattooed body came to life under the lights.

A few moments later, as she crawled across the stage, she stopped and looked directly at the two of us. There was a clear pause, a smile, a change of focus to my wife ONLY, and then she rose to her knees, reached behind her back, and pulled her bra strap to the ground. Her breasts were full and erect, obviously enhanced and unabashedly beautiful. She smiled again before rolling across the floor to show some affection to another customer on the other side of the stage.

“That’s the one.” My wife looked at me and smiled.

Like all couples with all things, we’ve developed a set of rules and roles for all activities. These rules aren’t typically spoken or planned but rather what naturally comes to be as we experience life together. This plays out with default roles and rules for shopping, cooking, cleaning, errands, and yes, even going to a strip club together.

The fact that we were actually in a strip club that night is a testament to our rule #3 philosophy. Tonight was just a regular date night and I was supposed to be the one to figure out what we were doing after dinner. I looked for movies, shows, or music events but there wasn’t anything really good so we fell back to our default date night dinner spot, a little neighborhood Italian restaurant that we both love.

We shared the gnocchi, the bolognese and a nice bottle of red. It was always good to get away, to talk, just the two of us. We decided that after dinner we’d head to a local cocktail bar and call it a night.

At the bar, we ordered vespers, sat in a corner, and began to reminisce about some of our sexual adventures together.

“Remember the time we went to that strip club in Vegas and — ” she said as I jokingly interrupted.

“The pants, yes, yes… I remember.” I could tell exactly the time she was talking about by the way she was smiling as she said it. I shrugged. “Maybe not our finest hour, but a damn good memory.” We laughed some more and the conversation paused as we both sipped our cocktails and momentarily lapsed into our own thoughts.

Looking at my watch, I realized that it was still only 9 pm and we had a sitter till midnight. I felt bad that I couldn’t pull together a good after-dinner activity but I didn’t want to spend $50 bucks on a movie I didn’t want to see and I honestly preferred to do something more interactive with my wife than to sit next to her and watch a screen in front of us in silence.

“You know there’s a strip club down the street,” I said with as little leading emotion as possible.

“Really? Are we going?” she replied.

“Well, I don’t want to go home yet.” She looked up at me with a slight twinkle in her eye and within a few minutes we were in an Uber and heading into a room full of naked women. Our date night dinner and a movie was now dinner and a lap dance.

We’d never been to this place before so we didn’t know the rules. Who do you ask for what? What does a private dance mean? Where? How long? How much? And that’s why I thought it was so sexy when my gorgeous wife popped up and followed that dancer toward the dressing room.

When she came back a few minutes later she simply said, “Her name is Capri, and she’ll be with us shortly.”

When Capri came over to our table she introduced herself and gave us a quick rundown on pricing. It was X amount for a private dance and X+Y for a couple’s private dance, and there was a discount for multiple songs, and so on. After we talked a bit more, she said that in all honesty, she would rather dance with us as a couple so she’d be happy to just charge the lower individual dance rate. My wife responded quickly with, “In that case, let’s do the four-song package.”

The private dance area was a large space at the back of the club with high-backed, high-sided two-person loveseats. We spun a loveseat around and created a booth of sorts and she asked us to sit across from each other. Then she asked, “Who’s first?” and I told her my wife definitely deserved the first dance.

It was an amazing view. When Capri leaned her chest forward to show my wife her breasts, her ass would push back toward me. When she turned and rubbed her backside against my wife’s legs, she smiled at me and cupped her breasts in each hand. When she straddled my wife, one leg on the sofa and the other on the ground, I could see her pussy peeking out from her thong and beyond that, her hand pushing down into my wife’s inner thigh for balance.

Then it was my turn and I got to feel and see what my wife had experienced moments before. See the same moves from the other perspective knowing that my wife was being the voyeur now too. Inches from the dancer’s breasts, I could smell her perfume. Her inner thigh resting on my dress pants, I could feel her heat. I looked past her to my wife as she stared at Capri’s ass moving slowly and naturally over my body.

“You should come over here,” she said as the second song came to an end and she took my wife’s hand and guided her over to my loveseat. As she began to dance for both of us together she grew closer and closer to us. What was suggestions of touch became a firm glide across the skin. A leg resting on a leg became a pelvis grinding on a thigh.

“What are the rules?” my wife said, loud enough that I could hear too.

“I make the rules,” Capri responded without hesitation. “Don’t be shy, I like you. If I don’t want you to touch something, I’ll let you know.”

I felt her hand slowly exploring the inside of my right leg until she found the end of my cock. She stopped for a moment like it was a mistake and looked down at me. My hand was on her leg and I slid it slowly upward and back toward her ass in reciprocation. She turned her head and stared down at my wife as her hand moved forward again, but this time deliberately clamping down on my cock and giving it a playful squeeze.

I looked to my wife and saw how turned on she was and then I looked down again to realize that it wasn’t just because the dancer was touching me; Capri’s other hand was squarely between my wife’s legs. I reached farther behind Capri’s ass and without effort or necessarily intent I felt her pussy protruding from her thong. She swayed her ass toward me and not away.

Turning around, she sat between us, perched on our thighs, and again placed her hands between our legs. I reached around her and took my wife’s hand and guided it back to the dancer’s pussy. Capri swayed her hips back and forth for a few moments as she let us touch her softly together.

Standing up to face us again she offered a hand to my wife. “We should dance for him, together.”

For a brief moment, I was concerned that my wife might feel pressured to do something she didn’t want to do but from what came next, she was clearly eager.

Within moments, they were each straddling one of my legs and grinding down into me as they groped each other. My wife reached out and cupped Capri’s breasts and the dancer caressed my wife’s tits over her sweater.

“Those are nice,” said the dancer. And with that my wife went ‘next-level’ and pulled her sweater and bra up and over her tits as if to say, “How nice?”

“This isn’t your first strip club,” said the dancer as she reached both hands forward to touch my wife’s breasts and lightly pinch her nipples. I reached forward too and held one breast from each woman in my hand for a brief moment before the final song came to an end and my wife quickly but sexily pulled her shirt back down.

We all stood up, Capri put her bra back on and we engaged in a bit of small talk as we happily paid for the performance.

She told us that she had moved here pretty recently and that… surprise, surprise… her real name wasn’t Capri. It was Cassy.

And then she said something that did surprise me. “Are you two ever looking for friends, outside of a place like this?”

“Sure,” I said without even thinking, “you two should share numbers.” I wanted to follow that up with ‘what kind of friends are you looking for?’ but that would be pressing. It felt right to just let numbers be exchanged and to let it organically be whatever it was meant to be. Even if that remained a mystery.

When we left the building I asked my wife what she thought Cassy meant by “friends.” Platonic? Friends with benefits? Paid? Did she really like us or was it all a show? After all, she was at work, and we wouldn’t be offended if it was all a really good performance. It was well worth the price.

The next morning, when we woke, there was a text on my wife’s phone. It read, “This is Cassy. Definitely hit me up if you want to hang out or just play sometime.”

My wife showed it to me and smiled. “What do you think of this?”

“Play… I like a good game of Yahtzee, or maybe Scrabble,” I joked and then paused. “It is nice to know that she had a good time.”

“True,” she said looking back at the phone. “What should we respond?”

I paused again and then smiled from ear to ear. “It’s your call, of course, but I’m up for Game Night if you are.”

Eli West Follow
« There’s a Husband Hiding in the Wardrobe
Your Place Or Mine? »