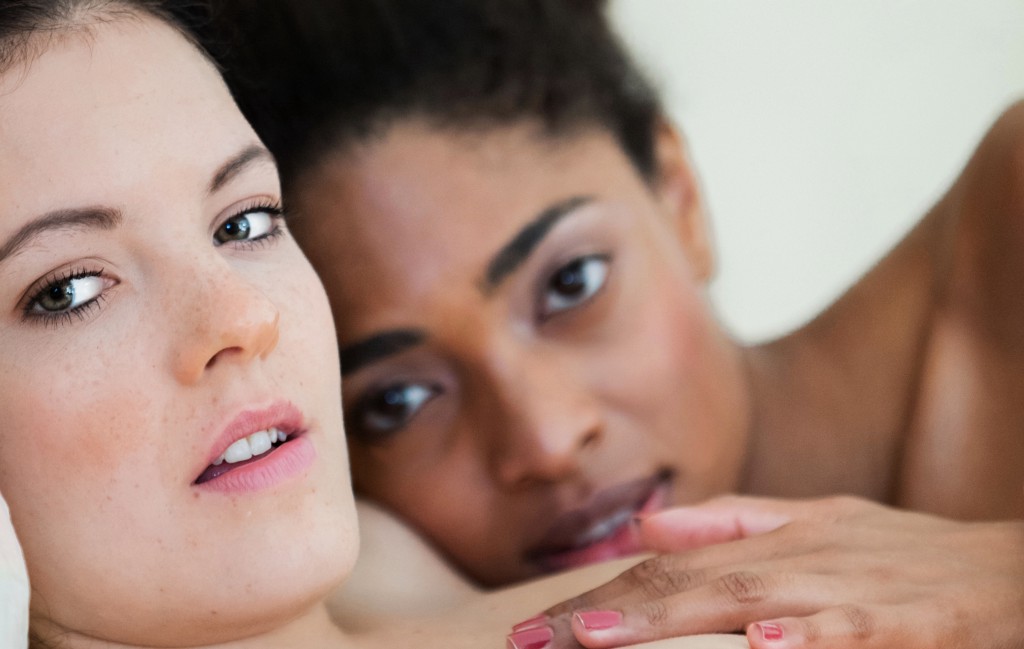 I’ve been told I have the reflexes of a cat and an unnatural ability to move silently. I think that comes from a time in my life when explosive anger was always hovering in the air. I tried very hard to be invisible at all times. Ultimately, therapy helped me work that out, but I still retain some ingrained muscle memory that makes most of my movements reminiscent of ninja.

When I came home, I didn’t make a big production of it. I knew you were home. I suspected you’d still be asleep. I thought I might surprise you. I wasn’t supposed to be back for another day or two. As I climbed the stairs, I took off my pencil skirt and blouse, leaving a trail of business attire behind me.

Black cotton underwear and bra were next, left crumpled on the step. My skin brushed by the cool air for the first time since I’d dressed that morning. My nipples stood at attention. They were red as canned cherries and stood out like eraser heads. My mound was covered in short blonde hair, a few shades darker than the undercut I sported. Lips were already swelling and damp with the thought of your jet black, thick pubes under my palm.

We’d talked about opening our bed to others. I was keen on the idea as were you. I just thought we’d talk about who first. And that we’d both be present. I opened the door and saw her between your legs. Then I understood.

Our next-door neighbor was a frequent fantasy lover in our discussions. She was taller than either of us and curvier. Your Japanese heritage and my own simply petite ancestors meant we stood eye to eye. Julia topped us by a foot at least. Her dark skin and big breasts were mirror opposites of our bodies. Her round ass stuck up in the air as her mouth was busy on your slit.

I moved through the room, neither of you aware of my presence. Rather than being angry, I was turned on. I stepped behind Julia and ran my hand over her ass.

She startled and you whimpered when she pulled her mouth away.

Smiling, Julia lowered her mouth back to your steaming slit. The smacking noises her mouth made on your lips made me hungry. I couldn’t blame her. You were always delicious.

At first, my thrusts were slow and steady. I corkscrewed the glass rod in and out of Julia, taking time to admire her pussy. So different from yours or mine. I watched her ass open to my eyes as she continued making a meal of you. She had loosened those muscles on purpose, I thought. While I continued fucking her, I let my finger trail up and down the crevice.

She nodded furiously while I teased her. Your moans quickened and I knew you wouldn’t be long. I reached for the nearby bottle of lube and squirted some onto the smooth, soft expanse of dark brown skin before me. It was cool, but not cold. My hand worked the clear fluid over it as she shivered. My fingers and her skin thoroughly coated, I teased the nearly black pucker of skin.

Her nails dug into your thighs as I pushed my finger into her. She took her mouth away from you and laid her head to one side as I fucked her in both holes. “Jesus, that feels good.”

You snatched her hair and pulled her mouth back to your pussy. “Not as good as this feels.” You wrapped your legs around her head. The air in the room was charged with sensual energy and filled with the smells of our bodies.

Julia panted and moaned around a mouthful of you.

You started spitting curses in Japanese. I knew that meant you were only seconds away.

I took my finger out and examined it. It was clean. I acted on my impulse and filled the space with my tongue. You would have thought I’d applied electricity, Julia jumped so much. But she didn’t move away. She pressed her ass against me and I felt her legs begin to quiver.

The sucking noises intensified and in seconds her sphincter and pussy grabbed their contents and squeezed. I growled into her flesh and heard you come, your body juddering and squirming under the lashing of her tongue and suction of her lips.