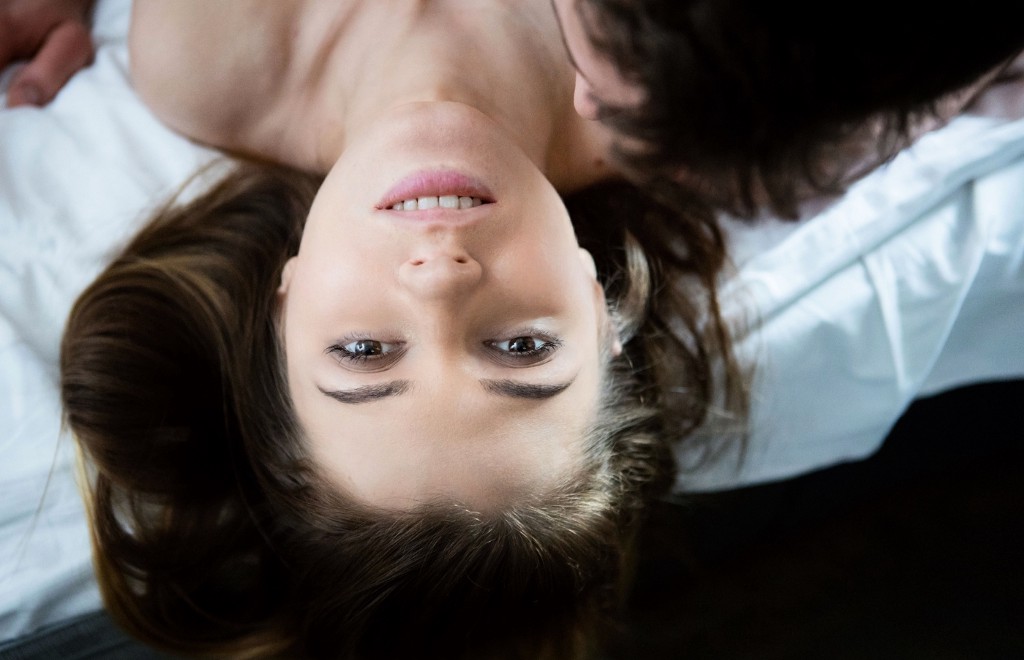 What I love most about my June birthday is the surprise that Eli always has for me on that special day. I am not talking about the gift (though he is also thoughtful in that department); I am referring to the love session that he plans for me. We love to fuck. But on our birthdays we take it to a whole new level. This time, its mine. And I know I am in for a treat.

My 33rd birthday started out as a normal day for me. I love this 30s decade. It has made me a more mature, centered and very sexual woman.

Eli told me that I would be meeting him and his friends for a birthday dinner at 6pm at our favorite restaurant. He had made reservations for four. Immediately, I felt disappointed. I wanted this day to be all about us and not include our friends. Anyway, I told myself that since it was an early dinner, we would have the rest of the evening to ourselves. So I dressed to kill in my tight red dress and high heels, finishing the look with red lipstick and my hair in an updo.

I arrived at the restaurant at 6pm and found Michael and Kate already at the table waiting for us. Eli had told me he had some things to wrap up at work and would meet me there. Michael is Eli’s best friend. They grew up together, and since they are really tight, I have become friendly with Kate too.

We started making small talk but I was more focused on Kate. She looked good but I noticed she was on edge. I leaned over and asked softly if everything was okay and she nodded, while looking at Michael with the open hunger and desperation of a woman who wants to be bent over the table and fucked hard. Okay then! We have all been there at some point.

I looked at my phone, seeing a text from Eli:

Sorry I’ve been delayed, but go to the hotel with Michael and Kate, they will give you your birthday surprise and I’ll meet you there for dinner later.

We followed him to the elevator. Once the door closed, he grabbed Kate and pushed her against the wall. He put his hands between her legs and started rubbing on her clit. She moaned loudly and clung to him like a lifejacket in the sea. She threw her head back giving him access to her neck; he latched on and bit her gently. I was flabbergasted. This was an intimate moment between my friends. What should I do? I tried to look the other way to give them privacy, but Kate’s moans drew me back and the pervert in me turned to watch. I’ve always loved to watch. Her expression as Michael pleasured her was priceless. I was instantly hot. The elevator felt too hot. Suddenly, it pinged, as we reached our floor. Michael broke apart from Kate and took her hand, leading her to the room. I hesitated, but he beckoned for me to follow. So I did. Slowly. Cautiously.

He opened the door and ushered us in, then locked the door behind him. Now I was trapped with them in the room. He pointed for me to sit on the ottoman that directly faced the bed. I looked at him questioningly but he urged me to sit, saying my surprise would follow soon. I sat down.

Michael sat on the edge of the bed. Kate moved towards him and he pulled her between his legs and began kissing her. Slowly at first, as a lover kisses the love of his life. Then his tempo changed and things escalated. He ripped her shirt open and pulled her breasts out of her bra. Then he sucked on them hungrily. Kate moaned like she had been set on fire.

I watched them transfixed, feeling my arousal rising as the minutes ticked by. This was not right. I had to leave. But I couldn’t bring myself to move. Another text from Eli arrived as I sat there fidgeting:

Enjoy the show. It’s your birthday surprise. I will see you soon when I come to pick you up.

Since I had his permission, I sat back to enjoy the show. Michael and Kate did not disappoint me one bit.

Michael threw Kate on the bed making sure her face was on the edge so I had the perfect vantage point to watch her reaction to everything he did to her. Her sucked on her breasts some more and her eyes fluttered closed. He moved down to her stomach, then he reached between her legs. He started eating her out. He went slowly at first as if acquainting himself with her taste, then he devoured her like a beast possessed. Kate grabbed his head and moaned again. She had a death grip on his hair that led me to imagine the kind of pleasure he was bestowing on her. I swallowed hard. My nipples tightened in response and I felt my pussy getting warm and tingly, needing some friction to release the ache. I clenched my legs, but I received no relief. My breathing grew heavy and I wanted to touch myself so badly, but I forced myself to just observe.

“Fuck, fuck, fuck!” Kate moaned loudly and came on her man’s tongue. Michael positioned himself between her legs and began to fuck her. There is nothing more striking than watching a man driving in and out of his woman. Looking at the way his ass muscles moved drove me crazy. I’ve always loved that about Eli. That’s why I love to fuck in front of the mirror. It’s raw power. And Michael was driving inside Kate as exquisitely and powerfully as I had ever imagined. Kate was a mess, consumed with pleasure. I couldn’t feel my legs at that point, and I wished somebody would turn up the air conditioning in the room because I was feeling hot to the point of feverishness.

Before Kate could come, Michael withdrew from her and flipped her onto her stomach. He started fucking her from behind. At this point I imagined he was going deeper, and he moved from one angle to another, hitting her vaginal walls in a perfect rhythm. Kate fisted the sheets, enamored by the intense pleasure.

Michael said, “Talk to me, baby. Tell me exactly what you want me to do next to make you explode in ecstasy. Tell Val exactly how you want me to fuck you next to finish you off.”

Kate moaned and summoned her voice, which was hoarse from all the pleasure. She said, “Please rub my clit and put your finger in my ass. Go harder inside me.”

Michael did just that. I imagined all of that happening to me and I envisioned the pleasure that I receive when Eli plays with all my holes. I was ready to combust. However, Kate beat me to it. She came with a scream and one, two, three thrusts later Michael groaned an animalistic groan and came too.

I was speechless. Kate was satisfied to the point where she couldn’t move any part of her body. Michael got up and went for his jeans and retrieved a set of keys from his pocket. He gave me one of them: room 206. “Eli will find you there, he is on his way,” he said. I took the key and made my way out of the room, shaking slightly. I turned back briefly at the door, to see Michael cradling Kate in his arms, kissing her gently.

I went to room 206. I couldn’t calm down though. I was beyond hot and I needed Eli right fucking now. As I took out my phone to call him, there was a knock on the door. I went to open it and Eli strutted in.

“So, are you ready for dinner? It’s almost eight; we can make it there for your birthday cake.”

Was he seriously talking about dinner? But then I noticed the hard-on in his jeans. I looked at him. Really looked at him. Let him see all the need I had for him and how aroused I was. He drew in a ragged breath.

We moved at the same time, colliding in the middle. I kissed him urgently while doing my best to unbuckle his belt as fast as possible to get to his cock. He raised my dress to my waist and tore off my thong that was drenched with need. I was that wet. We fell onto the bed, with me on top. There was no foreplay for us. I aligned my pussy on his cock and sat on him. I was ready to come on the first push. Bless Eli’s soul for knowing what I needed, he pinched my clit and rose to bite my nipples that were hard as pebbles through my dress and I came with a scream. I came down a bit from my orgasm, enough to ride my guy properly, though he flipped me over onto my back and took charge.

I came three times after that.

We never made it to dinner on my 33rd birthday. But I got to watch my friends, and then fuck my guy like a woman possessed. I say best birthday fuck ever.

The Devil’s Triangle With Two Angels

Never Too Busy To Fuck