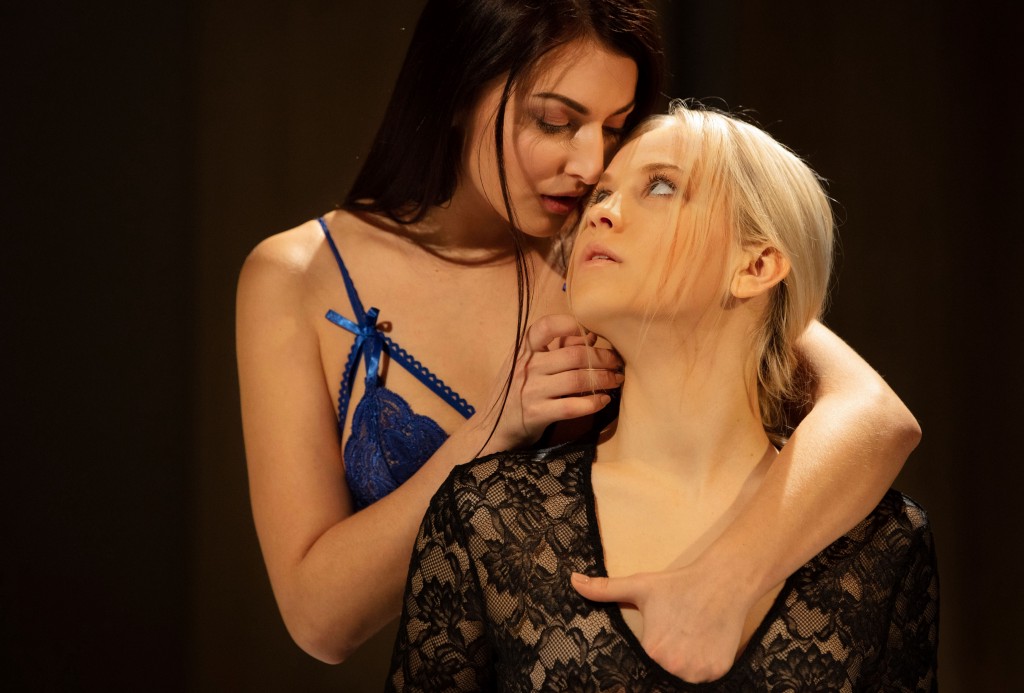 Brandy grabbed a second throw pillow and stacked it behind her on the arm of the sofa. She put her feet on the plush seat near her butt, with enough space between her thighs for her hand to slip up under her skirt. The skirt that would be around her waist in a moment.

The thought of possibly getting caught made it a shit ton hotter.

She renewed her movements between her legs as she lost herself in a story of two women exploring each other passionately.

It was so hot. She was so close when it ended. She set her tablet aside.

“Enjoying yourself?” a disembodied voice asked somewhere in the dim light. A female voice. Fuck, one of her bosses had caught her. Brandy worked as a live-in nanny. Her employers were nice, but kept a distance from her. She was not part of the family. She was a caregiver.

And now one of them was staring down at her. She scrambled to cover herself and sit up. “Don’t stop on my account. I wonder what you were watching.”

The beautiful older woman stepped into the room. She was wearing a short silk robe.

Brandy cleared her throat. “I was reading, ma’am.”

“I think after that display, you can call me Kate.” She grabbed the tablet from the table and pushed the button to turn it on. Brandy fixed her skirt while she waited.

“You are a naughty girl, Brandy. You seem so sedate, so steady. I wouldn’t have guessed you had a hidden passionate side.”

Brandy didn’t know what to say. She smoothed her skirt again.

Her boss sat beside her. Kate turned Brandy’s face toward her. She caressed her nanny’s cheek and lips. “Say my name.”

“Good girl.” Kate kissed Brandy, who was so shocked she didn’t move. “Have you ever kissed another woman? Or is that just in your fantasies?”

“I had a girlfriend or two. High school. It’s been a while.”

“Since high school it’s only been guys.” Brandy squirmed. She and Kate had barely exchanged ten sentences about anything other than Kate’s children. Now she was giving intimate details of her life to the woman. Who had kissed her only a moment ago.

Brandy leaned forward and kissed Kate. The older woman smiled and deepened the kiss. Their tongues met in the middle, sweet and hot and soft; both women moaned. Without breaking the kiss, Kate set the tablet aside and her fingers pushed the buttons of Brandy’s shirt free from their trappings. Kate’s hands were warm on Brandy’s skin, shoulders down to her belly. She wiggled out of the shirt.

Kate pulled back from the kiss and studied the young woman before her. What did she see? Youth? Inexperience?

Brandy saw a new side of Kate. The eyes she’d thought cold and calculating, were sexy and passionate. Her hair was still perfect, but it would be difficult to muss up the short crop look. She wore no makeup now.

Kate removed her robe to reveal her matching tank top and panty set. Even after two kids, she had beautiful breasts. Brandy reached for her, but Kate pushed her hands down. “I get to touch you first, precious.”

Kate pulled Brandy’s bra away. Her fingers teased the dusky nipples. Brandy swallowed and leaned her head back. “Do you want me to touch you, Brandy?”

Kate bent her head and sucked one nipple into her mouth. Women are so much softer, Brandy thought, as Kate’s tongue circled the sensitive spot.

Brandy grabbed Kate’s blonde hair and pulled her closer. “Hands to yourself, precious,” Kate rasped. When their eyes met, there was a hardness. “You don’t want me to punish you, do you?”

“That’s a good girl. Just enjoy yourself.” Kate flicked her tongue on the other nipple a few times, then sat up. “Lie as you were when I arrived. I want to see what’s under your skirt.”

Brandy nodded and reclined on the throw pillows. She gathered her skirt around her waist.

Kate looked at her plain white cotton panties, running her hand over the crotch. “You look so innocent in those. But we both know the truth, don’t we?”

She was rewarded with Kate’s finger rubbing her clit — through her panties, but it was still good.

The blunt word made Brandy flush. She didn’t hesitate to push down her panties. She was ready, she needed to be touched.

“Touch yourself,” Kate commanded. “Like you would have if I hadn’t caught you here messing up my sofa.”

“I wouldn’t mess it up.” Brandy felt compelled to defend herself.

“I can smell how wet you are, precious. Are you always that wet?”

Brandy shook her head. “You,” she whispered.

Brandy dipped her finger into the wetness. She smeared it over her clit. Her legs fell apart, exposing herself more.

Brandy licked her finger, then sucked it between her lips.

Kate climbed up on the sofa between her legs. “Do you want me to make you come?”

Kate didn’t seem to care as she nuzzled into Brandy’s cunt and breathed in deeply. “It’s been awhile since I smelled good pussy.”

Brandy didn’t know what to say. She thought of Kate’s husband, upstairs, asleep, unaware his wife was having sex with the help. She felt a little guilty, but then Kate’s tongue slithered along her slit. All thoughts fled and her hips jerked up.

Brandy whimpered as Kate’s tongue parted the soft lips and found her clit. Brandy pushed her hips down and stared at the ceiling. Her hands found Kate’s head and smoothed her hair before settling to her shoulders.

Kate’s tongue was like silk on Brandy’s clit, pushing her legs further apart. As far as she could manage on the sofa. Next time on a bed. Next time? That seemed unlikely. She shook her head.

Focus on the woman licking your cunt.

Kate moaned and that was all it took for Brandy, knowing her partner was enjoying herself. She rushed off the edge and into full body quivering. She felt the orgasm everywhere and Kate lapped it up, extending the warm glow.

Fuck. That was amazing.

Brandy lay there as Kate kept licking, but her body was drained and Kate seemed to realize and pulled away.

She crawled up over Brandy and kissed her on the lips. Brandy’s chest wouldn’t stop heaving as the aftershocks bounced through her mind.

Kate slid away and when Brandy sat up, the older woman was pulling her robe back on. She bent and kissed Brandy again, a soft, slow brush of her lips.

“Mitch will enjoy hearing about this. Maybe we can give him a show next time.”

Before Brandy could respond, Kate disappeared.