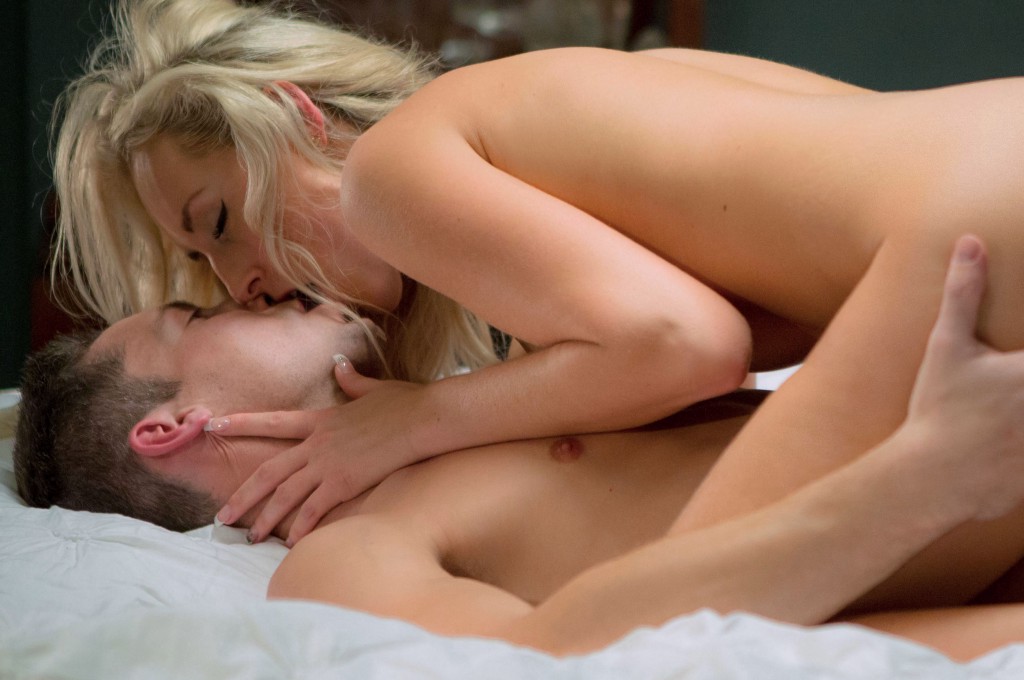 He loves it this way. The view of her fantastic figure on him. The sensual curves of her neck, her shoulders and her breasts. And the way she sways her head to try to get her hair out of the way before she descends on his lips for a kiss. He moves his hands up to hold her hair, and ends up cradling her smile in his palms.

Magic under the covers redefined. He knows she is usually cold and keeps the blanket on top of her. Except that with all the rubbing they catch fire and in a sudden act of liberation she sits up and throws the blanket off. She bends down again and gently rubs the tips of her nipples on his chest.

It is madness this morning. She is rubbing her labia over his morning hardness, lubricating all his length with the juices of her desire.

His cock starts pulsating, and during one of her rocking motions she lifts slightly to lock the tip into the correct position. It is just as when you find two matching jigsaw puzzle parts that fit together. She enjoys his tip at her entrance, she is teasing him with a fine dance, like a finger caressing the trigger of a gun before pulling it.

He sees the fire in her eyes and surrenders by putting his arms above his head. She moves her hands to pin his wrists to the bed. With the tip of his cock still at her entrance she moves down to kiss him. He puts up his lips but she is looking for his ear. He turns his head to present it to her as an offering to a goddess. Her lips dance kiss by kiss over his earlobe, moving towards the centre of his ear. It gives him shivers, but all he is focused on is not losing the connection that they have established between her vagina and the head of his cock.

She moves the tip of her tongue inside of his ear, and with fast motions she starts tongue fucking him. She can feel his body squirm under hers and pushes down to receive all his manhood inside of her. She is so wet for him this morning that his rod slides all the way in. She stops there, wanting to enjoy the feeling of his dick pulsating inside of her.

These sudden energies always come out of nowhere. She lets his arms go and as he grabs her by her waist their loving ballet begins. Slowly out and hard in. They are both looking down at their combined sex. The view slightly obstructed by the silhouette of her right breast. The tip of her nipple all hard, like a soldier at the gate while the guest is already in the palace. His hands lower to her hips and guide her circular motions.

Are her words. He looks at her and nods in agreement. As she feels how his hand is working on her request down there she starts kissing him passionately. The kind of kisses that turn him on no end. The movement of his hand is working wonders on his manhood and suddenly she can feel how it is the tip of his dick caressing her clit.

…is the change of plan. He moves his hand away and they slide into their togetherness in one motion. She loves when his dick gets harder and harder as he is pumping his love inside of her. She can feel the jerks of his cock inside of her as he is getting closer to his destination.

He is now holding her flat on top of him. So close that there is no space between them. Her head is next to his and she is panting for air. Their hips are in a manic dance that only they understand. She can feel how he is getting out of rhythm. The unexpectedness of the moment combined with her primal desire for his seed has turned her on once more. She wants his juices inside of her and she wants them now.

Her vagina is sliding at just the right angle and caressing the right spot of his rod. He twitches and moans, just what she needs to let go. They both spasm at the same time. She squeezes every last single drop out of him. As if she was stabbing the beast of passion, it is one down, two, three, four. Until he starts moaning out of sweet pain. Her mouth looks for his kiss. It is a sweet “thank you.”

Bunny, you’ve squeezed every single drop out of me, there is nothing left!