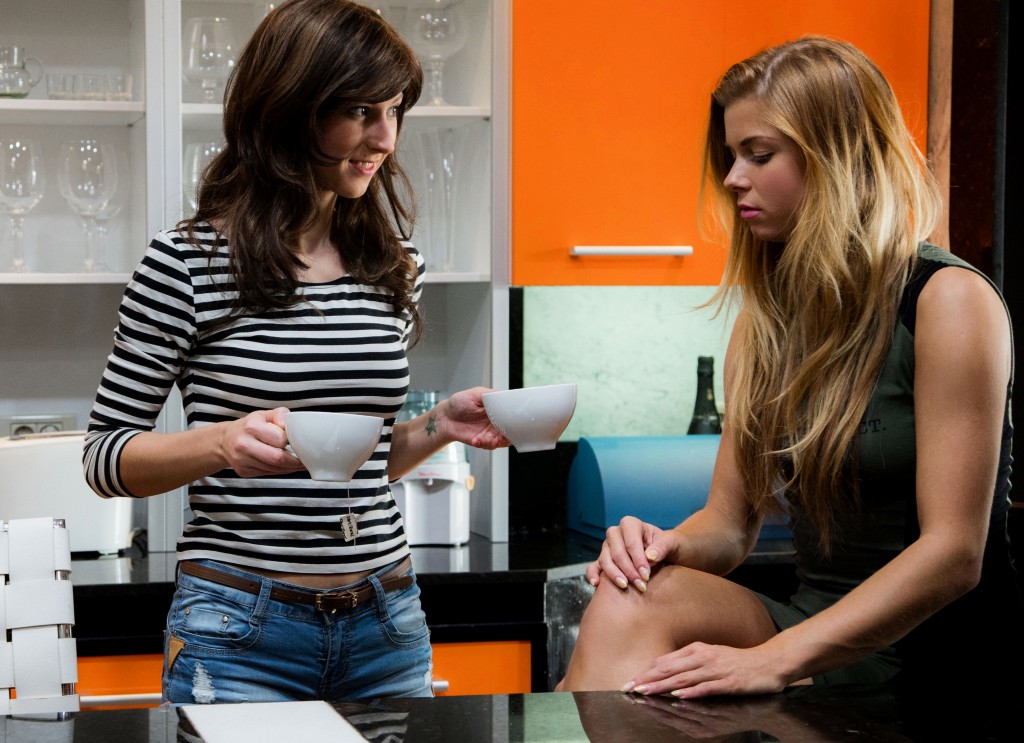 ‘So what,’ asked Angie, with her chin in her hands, ‘counts as the least satisfying sex you have ever had?’

‘You really want to know the answer?’ I couldn’t help a glance at Sue.

‘Rory!’ we chorused, bursting into giggles.

Sue had to put her coffee cup down, because her shoulders were shaking so much. She threw back her head and went into peals of laughter.

‘You already told me about Rory, and he didn’t seem that bad,’ observed Angela.

‘Well, to be fair, he wasn’t bad as a person,’ said Sue, stirring her tea, ‘it was just that he was completely clueless about women.’

‘Me too, but be honest, Tabby, we basically felt sorry for him.’

I thought for a few seconds. ‘In that case, the least satisfying sex I have ever had was with a guy I dated not long after I left school.’

‘Is that the one who had you in his dad’s car?’ asked Sue.

‘No, not him, although I don’t really count that as sex, since he never got properly inside me.’

‘I can remember you telling me about the trouble you had getting back home afterwards.’

‘Remind me what happened,’ asked Angie, looking at each of us in turn. ‘I’m feeling a bit left out.’

I gave her a hug. ‘I was wearing a prom dress I had borrowed from a friend, and because she was at least a size larger than me below the bust, it was held together with safety pins, so I daren’t take it off. I felt stunningly sophisticated, because I was wearing stockings and a garter belt, and I had splashed out on some gorgeous knicks that just made me feel ultra special. He had his hands all over me when we were dancing, and he kept trying to buy me more drinks, and he couldn’t keep his eyes off my boobs. He must have had a hard on for half the evening and it felt so huge that in the end I whispered that I was dying to feel him inside me. Which I was.’

‘Yep. The moment I said I wanted sex, he couldn’t get out of the dance fast enough, and he grabbed my hand and just about ran back to what he had told me was his car, with me struggling to keep up on my heels.’

‘Only it turned out to be his dad’s car,’ said Sue.

‘He parked up somewhere out of the way, and the next thing, he was kissing the tops of my boobs while I was trying to undo his shirt, and somehow we got his jacket off, and I had to tell him about nine times there was no way I could undo my dress, and that it wasn’t mine anyway. By then he had extracted one of my tits and he was sucking my nipple and I had his cock in my hand at last, but he was in the driver’s seat, so we couldn’t do very much. In the end we somehow managed to clamber into the back of the car — there was quite a lot of traffic on the road, so we had to make a dash for it — and I hiked up my dress and pulled my knickers to one side, ready for him.’

‘He was fumbling around with his fly, but he was half out of the car, and on top of it all he had parked over this enormous muddy puddle, so he was holding his pants from falling down into it with one hand, and he was clutching onto the seat with the other. I didn’t have a spare hand left to help, but I was panting with lust by then, and dripping wet, so all he needed to do was make contact, and he would have been in. I forgot to say that it was pouring down with rain.’

‘You couldn’t make this up,’ sighed Angie.

‘Eventually I managed to get my puss in contact with his cock, and it began to slip in, and then this huge truck went past in a blaze of lights and a blast of water, and the driver blew the horn — he must have seen us! I was mortified, but the effect on Gary — that was his name — was worse, and he just came on the spot, with the head of his cock only half inside me.’

I sighed at the memory.

’It was just whoosh, and I was full of semen. Never having had proper sex before, I had no idea what really to expect when someone came inside me, except Gary wasn’t really inside, and he popped out while he was still coming, so it went all over my bush, and I was so surprised I let go of my knicks. The next thing, he was leaping back and pulling his pants up, and I had a hand clutching my crotch, and my panties were so wet that there was come literally soaking through them, and was there a tissue to be found in the car?’

Angie held her hand over her mouth. ‘What did you do?’ She looked aghast.

‘It was a real circus. He was going crazy in case any of it got on the seats, which is when I realized it wasn’t his car after all, and I was scolding him and telling him that was his problem, not mine, because I was 100 percent focused on not getting any of his come on my friend’s lovely dress. I wriggled out of the car, fixed my top, and — in between passing sets of headlights — dropped my knicks and more or less wrung them out. By then, he had his jacket back on, and he was just sitting holding the steering wheel, staring at me, with his mouth open, the dolt. He started saying that we had to go, over and over again, and I am sure he was having some kind of panic attack. All I could do was to wipe myself off with one hand as best as I could, but I had come running down my thighs and into my stocking tops, so there was no way I could sit on the seat. In the end I had a brainwave, flipped the carpet out of the foot well upside down on the upholstery, and planted my bare bot on that. On the way back I spotted a lady’s loo, and I made him pull over, dashed in, cleaned the rest of myself up, and washed out my knickers. Gary was about as much use as a chocolate fireguard from beginning to end, and I took my time to tell him so on the way back.’

‘And that wasn’t the worst sex you ever had?’ Angie’s eyes were like saucers.

‘No, without the slightest shadow of a doubt, that was Gregor.’

‘You never told me about him!’ intervened Sue.

‘I don’t tell you everything, darling!’

‘Well, you should,’ she grinned.

‘Gregor was a bit of a disappointment all round, to be honest, but in his case there was one single piece of behavior that completely blew it for me.’

‘Which was?’ asked Angela, topping up my coffee.

‘Don’t get me wrong, I did like Gregor a lot as a person, and he had a drool-making bod, even if he turned out to be incredibly dull in bed. It took me ever so long to work out that just because a guy had a great physique, he wasn’t necessarily going to turn out to be a great lover.’

‘Usually the reverse,’ murmured Sue, stirring her coffee moodily with her spoon, ‘the more obsessed they are with their own bodies, the less interested they are with yours.’

‘You won’t need to watch much to understand what I mean. Gregor knew all these moves, but he had no idea what they were for, and he just strung them together mechanically, like he was working to some kind of script that no-one had explained to him.’

I thought for a second.

‘Actually, it was like he thought he had learned some kind of spell in a language he didn’t know
and was convinced that if only he recited all the words in order the result would be a fantastic sexual experience. His weak point was that he didn’t take any notice of whether I was ready or anything, and I don’t think he even knew that he should. He would just do move A, and then move B, and then move C, and so on, until it was a relief when he came. In fact, he was one of the first guys I regularly used to let come in my mouth, because it was a quick way of getting sex over with. And you know how much I love it.’

‘Wow,’ said Angela, shaking her head. ‘So did he pay any attention to you at all in bed?’

‘Well, I was there, I suppose. But it slowly began to dawn on me that he was doing it by numbers. He used to give me a perfunctory kiss to start, would bypass my boobs completely, start licking my clit as if he was using a roller to put emulsion on a wall, then after three minutes of that, when I still hadn’t come — and wasn’t going to — his cock would be in my mouth. Then we would do just about every position that was guaranteed not to bring me on, and once or twice, he even tried to pull out and come on me.’

‘Do guys really do that?’

‘Only if they are eighteen and haven’t grown up yet,’ replied Sue. ‘The younger ones can’t get past the sight of their own sperm.’

‘It is so narcissistic,’ I added, ‘and it was pitiful. I don’t really know why I stayed with him for so long, and it was a losing battle trying to convince him that I didn’t like being slapped around, or having my hair pulled, or crap like that.’

‘Did he ever try and choke you?’ asked Sue.

‘I grabbed his balls, squeezed them so hard that his eyes nearly popped out, and didn’t let go until he was sweating with pain. Then I asked him if he liked being treated rough — he didn’t have much to say for himself, I recall.’ I picked a piece of fluff off my jumper.

‘Is that why you finished with him?’

‘No,’ I smiled at the memory. ‘No, the reason I finished with him was that the one habit I never managed to fix was him ringing home to have a chat with his mum after he came.’

‘Cross my heart and hope to die. Every damn time. I would lie there in bed twiddling my fingers while she told him what a loving boy he was and he basked in her adoration.’

‘Quite. But at least it was good to know that I was the second most important woman in his life.’