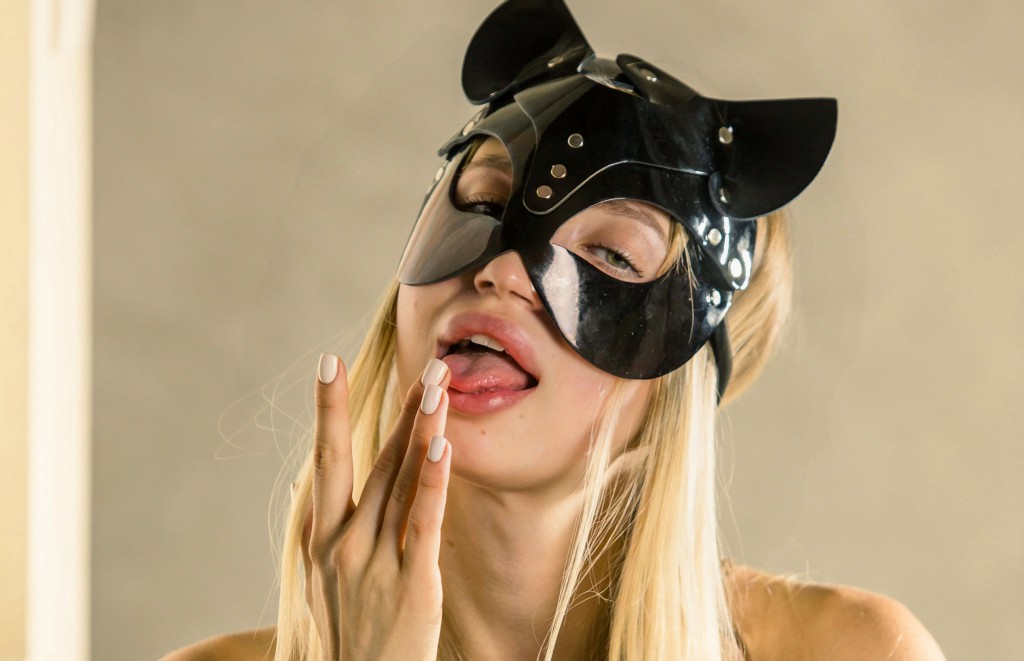 This pussy wants all the cream…

I nod as best I can with his thick cock rammed all the way to the back of my throat. My eyes, framed by the mask, tell him, go ahead, I want it.

That’s all the encouragement he needs to tip him over the edge. My lips and tongue have already coaxed him to iron-hard, throbbing rigidity — spiraling all around the sensitive head, licking wet stripes up and down his shaft, sucking him deeper one pulsating inch at a time; then pulling back to let him watch awhile as I go to work on another of the trio of erections I’m blowing.

Regular fetish clubs don’t much interest me — putting on a rubber dress doesn’t make you edgy or daring, it just makes you sweaty — but my dominant friend Angela knows how to throw a party. This ‘cool cats and kinky kittens’ ball has fired up everyone’s imagination, and the atmosphere is wild. Angela is the coolest cat of all, of course, in her tuxedo and fedora, but how could I resist playing a naughty little kitten? I’m certainly feeling very kittenish, surrounded by three hulking guys, who tower over me as I kneel and suck each of them in turn.

My kitty outfit consists of a mask, collar and leash, and strappy leather underwear. Angela allowed me to wear a short frilly dress in the main ballroom, as I don’t go in for public displays to all and sundry, but now we’re in one of the playrooms she’s made me take it off so I’m showing plenty of cleavage and ass cheek as I kneel there. I’d rather be naked and riding one of these delicious hard cocks, but Angela has made it very clear that bad kitties don’t get what they want — or at least, not until they’ve lapped up every drop of cream.

I’ve played with each of these guys before — though never at the same time — but our disguises allow us to pretend we are perfect strangers. The first to cum watches now, still half-hard, as my tongue curls and swirls around my next treat. Angela looks a little flushed. For a gold star lesbian, she certainly seems to enjoy seeing me suck dick — or maybe she’s just getting off on knowing that I’m following her orders. My chain leash is trailing down between my breasts now, forgotten, but I hear her stern words as clearly in my head as if she’d just uttered them:

“You will suck each cock, Rose, and you will not touch yourself. If you disobey, you will be locked in your cage for the rest of the night. Bad kittens must be punished. Is that clear?”

What response but a meek nod of acquiescence is possible to such a command?

I’m regretting it now though, my pussy clinging stickily to the leather between my thighs. The panties have a front to back zipper for easy access, but Angela has left it closed, knowing the friction will drive me crazy. Squirming is also forbidden. My nipples are diamond-hard, rubbing against the tight leather bra. The only way to ignore the sensation — or rather, to rise above it, so it becomes a steady thrum of arousal in the back of my mind, like white noise — is to immerse myself thoroughly in the diverting pastime of sucking cock. Once I hit my rhythm, like this, there’s no stopping me.

The erection I’m lavishing my attention on now is shorter but thicker, stretching my mouth in a wide O as my lips glide up and down. The thought of how it would feel stretching my pussy open makes a shudder of lust spasm through me. He’s already leaking pre-cum on the back of my tongue, and as I increase the pressure on the fat vein that adorns the underside of his shaft, then pull back and tease the frenulum, he groans and pulls all the way out, fighting to keep control.

I drink most of it down, then let him slide out of my mouth slowly, so the last couple of spurts trickle down my chin and drip onto my tits. I use my fingers to scoop it up and lick it off, lapping up each drop delicately, like a kitty cleaning her fur.

The last guy’s prick is almost purple with tumescence now, shiny with saliva and the pre-cum seeping out, making my mouth water with anticipation. I have to open really wide to cram the whole thing in my mouth but I manage it, lubing it up with spit until it’s glossy enough to let my lips glide up and down. He has impressive stamina and I settle in for the long haul, my hands squeezing his muscular ass so I’m not tempted to shove them in my leather panties.

I’m in my element, utterly engrossed in tuning in to his responses, each twitch and jump of his dick feeding my desire to please him. I feel his balls tighten, his breathing grow labored, his thighs trembling with the effort of holding back. I quicken my up and down slide, abandoning the elaborate tonguing in favor of firm, focused sucking. The flavor of pre-cum grows stronger; he’s close.

I don’t stop until I’ve cleaned up every drop. I have obeyed Angela’s command, but in my own inventive way, and I can practically hear the wheels turning as she ponders whether I deserve a punishment or a reward.

“Gentlemen, you may leave us,” she finally announces, in a tone of voice that means, get out.

I watch, silently, as all three straighten up their costumes and leave the room. I should feel disappointed, but the expression in Angela’s eyes tells me this kitty is about to get stroked…

More confessions from me here — if you think you can handle it! Maybe have a cold shower first…